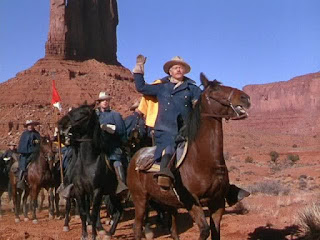 Based on the stories The Big Hunt and War Party for the Saturday Evening Post magazines by James Warner Bellah, She Wore a Yellow Ribbon is the story of a cavalry officer trying to prevent a war with the Indians just days away from his impending retirement. Directed by John Ford and screenplay by Frank S. Nugent and Laurence Stallings, the film is the second part of Ford’s trilogy of films devoted to the cavalry where a man tries to deal with another war with the Indians as well as aging. Starring John Wayne, Joanne Dru, John Agar, Ben Johnson, Harry Carey Jr. and narration by Irving Pichel. She Wore a Yellow Ribbon is a dazzling and exhilarating film from John Ford.

Set in 1876 in the desert just days after the Battle of Little Big Horn where General George A. Custer and more than 200 men were killed by Sioux and Cheyenne Indian tribes. The film revolves around a cavalry officer who is a week away from retirement as he has a final mission to do while getting his officers ready to lead. It’s a film that plays into a man dealing with these last days in service as he also has to watch out for a young woman joining the mission to go into this fort to aid another regiment in breaking up a squadron of Cheyenne and Arapaho tribes and send them back to their reservations. The film’s screenplay doesn’t just play with Captain Nathan Brittles (John Wayne) dealing with retirement but also wanting to have a final moment of glory in his final days of service. It is also about the mission in hand as Cpt. Brittle is reluctant to accompany his superior’s wife Abby Alshard (Mildred Natwick) and their niece Olivia Dandridge (Joanne Dru).

The script also have a few subplots as it relates to a couple of lieutenants vying for Olivia’s affections while it adds some punch to the story where Cpt. Brittle is trying to smooth things but also watch Olivia closely as if she was his daughter. While Cpt. Brittle is a man of duty, he also knows what to do and how to keep everyone from harm. The script also play into this world that is changing as tribes the cavalry are dealing with are young men that really have a disdain for the rule of the cavalry and the white man. It’s something Cpt. Brittle and a few of his officers understand yet they know they have to deal with it anyway they can as there is a key moment in the film’s second half that play into that world that Cpt. Brittle is facing. Even as it shows that he has to accept the way things are and that he might not be part of this new world.

John Ford’s direction is definitely intoxicating not just for the usage of wide shots to play into many of the film’s locations at Monument Valley in Utah but also in creating something that play into the grandness of the American West. The usage of the wide and medium shots for its depth of field as well as play into some of the scenery and the largeness of the cavalry regiment says a lot of what Ford wanted to do visually. There is also an intimacy in the direction with its medium shots as it plays into some of the relationships that are happening with Cpt. Brittle trying to make sense of everything as well as do whatever he can to do his duty and get everyone in check. There aren’t a lot of close-ups but Ford does know how to create something simple while also adding some humor as it relates to Cpt. Brittle’s friendship with Sgt. Quincannon (Victor McLaglen). The action sequences are thrilling in the way Ford would know how to film the action as well as create a lot of shots to get the scope of what is happening. Even as it play into the climax where Cpt. Brittle and his men would do something drastic to chase away the Indians. Overall, Ford creates a riveting yet witty film about a cavalry officer embarking on one last mission before his retirement.

Cinematographer Winton Hoch does brilliant work with the film‘s gorgeous cinematography with its usage of the Technicolor film stock to capture the beauty of the locations for many of the scenes set in the day to some usage of low-key lighting for scenes set at night as well as some of its interior scenes. Editor Jack Murray does excellent work with the editing as a lot of it is straightforward with some stylish usage of dissolves and rhythmic cuts for the action scenes. Art director James Basevi and set decorator Joseph Kish do fantastic work with the look of the fort that many of the character live in as well as a reservation that Cpt. Brittle goes to late in the film. The sound work of Clem Portman and Frank Webster is terrific for some of the naturalistic sounds that happen in the location as well as some sound effects for some of the action. The film’s music by Richard Hageman is superb for its bombastic score with its Indian-inspired percussions as well as the usage of bugles and broad string arrangements along with a traditional song that is the inspiration for the film’s title.

The film’s incredible cast feature some notable small roles from Noble Johnson as a famous warrior known as Red Shirt, Chief John Big Tree as an old Indian friend of Cpt. Brittle in Pony-That-Walks, Francis Ford as a barman, Chief White Eagle as a tribe leader in Chief Sky Eagle, Michael Dugan as Sgt. Hochenbauer, and Arthur Shields as the regiment’s surgeon Dr. O’Laughlin. George O’Brien is terrific in his role as Cpt. Brittle’s superior/friend Major Allshard as a man who tries to give Cpt. Brittle a fitting and final assignment while Mildred Natwick is wonderful as Allshard’s wife Abbey who goes to the mission to see some friends as she would eventually help out as a nurse tending to the wounded. Victor McLaglen is fantastic as Sgt. Quincannon as a longtime friend of Cpt. Brittle who had fought with him for years as he is also due to retire where he provides some comedic dialogue as well as be given a very funny sequence.

Harry Carey Jr. is excellent as 2nd Lt. Ross Pennell as Olivia’s boyfriend who finds himself sparing against his superior Lt. Cohill for her affections. Ben Johnson is brilliant as Sgt. Tyree who is Cpt. Brittle’s right-hand man who helps look into the areas that is happening as well as help lead the cavalry into battle. John Agar is terrific as Lt. Flint Cohill as a young lieutenant that is groomed to be Cpt. Brittle’s replacement as he tries to deal with his ahead as well as his affections for Olivia. Joanne Dru is amazing as Olivia Dandridge as Major Allshard’s niece who joins the mission to go to another fort as she deals with the chaos of what Cpt. Brittle has to do but also the affections of two lieutenants. Finally, there’s John Wayne in a remarkable performance as Captain Nathan Brittle as this cavalry officer dealing with his retirement as he tries to embark on a final mission where it is Wayne not only displaying a larger-than-life presence but also a humility and sentimentality to a man dealing with not being what he’s meant to do as it is one of Wayne’s great performances.

She Wore a Yellow Ribbon is a phenomenal film from John Ford that features an incredible performance from John Wayne. Featuring a fascinating script, beautiful locations, and a strong supporting cast, the film is definitely one of the finest collaborations between Ford and Wayne in its exploration of the American West and the world of the cavalry. In the end, She Wore a Yellow Ribbon is a sensational film from John Ford.

Very nice review. Haven't seen it in a while but always have enjoyed it. And as someone that isn't the biggest John Wayne fan that is saying something. I have a little John Wayne coming up in my BlindSpot post. Several of his pictures I feel the need to catch up with.

I have one more film of the trilogy to do as that is part of my Blind Spot and then I'm going to do one more Ford/Wayne film and maybe another western starring Wayne later this month. There's so many films of Ford and Wayne that I want to see as I think they are among some of the best director/actor collaborations ever.

There are so many Westerns I haven't seen yet. Not sure this one intrigues me enough to see it though, but I really should see something by John Ford at some point.

@ruth-Ford has made over 100 films though I'm not sure how many are available as he is considered one of the greats in cinema as he won 4 Oscars for Best Director. I would start with The Searchers which I think is his best film as well as a defining film of the western genre.