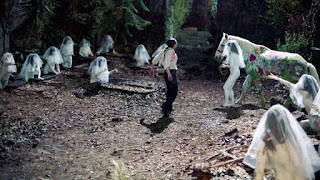 The film is a complex tale of a troubled and traumatized man who reflects on his life as a child living in the circus as a performer as he also copes with the demons of his past as an adult upon reuniting with his mother who wants him to kill women she sees as threats to her. The film is an unconventional story where it begins at an insane asylum where the protagonist Fenix (Cristobal “Axel” Jodorowsky) looks back at his life as a child magician (Adan Jodorowsky) where his parents were circus performers while his mother Concha (Blanca Guerra) was also a religious cult leader. Due to the infidelities of his father Orgo (Guy Stockwell), Concha would despise women as she disappeared leaving the young Fenix traumatized and institutionalized until he escapes, in the film’s second act as an adult, upon seeing her where she uses his arms to kill other women since she lost her arms following a fight with Orgo. For Fenix, whatever chances he has to find some normalcy or be with someone would be destroyed where he is consumed with guilt over his actions.

Alejandro Jodorowsky’s direction definitely bears not just style but also a lot of symbolism as it relates to the world that Fenix is in. A world of the whimsical and offbeat as well as the world of spirituality where Fenix is torn between two ideals that are each represented by his parents as both ideals have their flaws. Shot on location in Mexico, the film’s location represents that sense of conflict but also a world that is quite chaotic where Jodorowsky would create some dazzling compositions that play into some of the imagery that is prevalent in the film. The usage of wide and medium shots as well as some tracking shots play into some of the locations as well as the world that is the circus and the theatre where the latter play into the events in the film’s second act where Fenix returns to performing. The world of the whimsy wouldn’t just features a very bizarre scene that involve Fenix and Downs syndrome patients going to a brothel and snorting cocaine but also moments in Fenix’s performance as a magician.

The film’s violence is definitely graphic where Jodorowsky makes no qualms into the intensity of the violence that is in the film. The sequences in the first act that involve Concha and Orgo aren’t just gory but also have this impact where it is quite confrontational as it is really the start of what Fenix would be forced to do under Concha’s prompting. The scenes where Fenix is killing women where he is acting as Concha’s arms definitely add something that is very abstract but once Fenix’s arms would attack. All fucking hell breaks loose while there are also these elements where Jodorowsky also play into the fallacy of faith as it relates to what Concha believes in as well as what she tries to do. Especially in a scene where a Vatican magistrate (Sergio Bustamante) comes to her church to inspect this pool of blood where it showcases some of the fallacy of organized religion and faith. It would come ahead in the film’s climax in the third act as it play into Fenix’s struggle to be himself as well as the torment from his mother that continuously haunts him. Overall, Jodorowsky creates a terrifying yet rapturous film about a man’s struggle for sanity as he is tormented by demons in his life.

Cinematographer Daniele Nannuzzi does brilliant work with the film‘s very colorful and gorgeous cinematography with its usage of lights and moods for many of the daytime/nighttime exterior scenes along with unique lighting for some of the nighttime scenes. Editor Mauro Bonanni does excellent work with the editing as it has a few jump-cuts while maintaining something that is very straightforward and help play up some of the film‘s suspense. Production designer Alejandro Luna and set decorator Enrique Estevez do amazing work with the look of Concha‘s church and the shrine she created for her saint as well as the look of the circus and some of the places the characters go to. Costume designer Tolita Figueroa does fantastic work with the costumes that the characters wear as they‘re very colorful as well as have an air of personality into the characters and where they are in their lives.

Makeup supervisor Lamberto Marini does nice work with the design of the makeup from the look of Fenix‘s love interest Alma as well as the look of Alma‘s mother who is covered up with lots of tattoos. Special effects supervisor Marcelino Pacheco does terrific work with some of the minimal special effects as it relates to some of the magic tricks that Fenix performs as well as some of the intense moments of violence. Sound mixer Robert Camacho does superb work with the sound to play into some of the events in the circus as well as the party atmosphere in the streets. The film’s music by Simon Boswell is wonderful for its mixture of traditional Mexican folk music with some eerie synthesizer textures to play into the drama, comedy, and suspense where it help set a mood for a scene in the film while the soundtrack would feature songs played in a traditional ballad style.

The casting by Pablo Leder is great as it feature some notable small roles from Brontis Jodorowsky as a orderly at the institution, S. Rodriguez as a female wrestler called Santa, Hector Ortega as the institution doctor, Gloria Contreras as a performer that tried to seduce Fenix in Rubi, Jesus Juarez as a midget performance and friend of Fenix in Aladin, Sergio Bustamante as a Vatican official, Ma. De Jesus Aranzabal as a fat prostitute who would sleep with the Downs syndrome patients, and Teo Jodorowsky as the pimp who would give those patients cocaine and be this spark that would bring terror to Fenix. Faviola Elenka Tapia is terrific as the young Alma as this deaf-mute circus performer who would befriend the young Fenix while Sabrina Dennison is fantastic as the adult Alma who would remain deaf-mute where she would try to find Fenix and save him from the torment of his mother. Thelma Tixou is excellent as the tattooed woman who is Alma’s mother as she would seduce Orgo in a lot of ways and bring rage to Concha where she later becomes a prostitute and raise the ire of Fenix.

Guy Stockwell is superb as Fenix’s father as a circus performer who is also a hypnotist that tries to help his son become a man while also being flawed in the fact that he cheats on Concha to be with the tattooed woman. Blanca Guerra is amazing as Concha as Fenix’s mother who lost her arms during a fight with her husband as she becomes this figure of torment who forces her son to kill at urging where she has this very chilling presence that is just intriguing to watch. Adan Jodorowsky is brilliant as the young Fenix as this boy who deals with some of the events in his life as well as trying to be this performer who would lose his innocence in the most drastic ways. Finally, there’s Cristobal “Axel” Jodorowsky in an excellent performance as the adult Fenix as this troubled man that tries to regain some of his old innocence while dealing with the torment of his mother where it’s a very chilling and scary performance that is just fascinating to watch.

Santa Sangre is a phenomenal film from Alejandro Jodorowsky. Featuring a great cast, gorgeous visuals, compelling views on faith and torment, and some very intense moments of violence. It’s a film that explores the idea of torment and conflict through the eyes of a man as he reflects on his troubled childhood and already complicated life as an adult. In the end, Santa Sangre is a spectacular film from Alejandro Jodorowsky.

I remember discussing this Jodorowsky film w/ a friend of mine who described it as a mindf*ck, which is as you pointed out in your review. He said he appreciated its artistry but not sure it's a film he could easily recommend to people because of just bizarre and violent it is. I don't know if I can handle it to be honest, but it sure does sound fascinating!

I have one more film of Jodorowsky that I'm going to see this week as so far, this is his most accessible film to date. Yes, it's bizarre and violent but it has a tremendous story that explores the idea of trauma and demons as well as the ideals of a man who is being torn apart by his own mother. It is a mindfuck but those films are definitely a lot more interesting than what Hollywood usually offers.