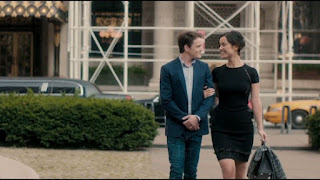 Written and directed by Victor Levin, 5 to 7 is the story of a young writer who meets a married woman as he would have an affair with her unaware that it’s part of an arrangement she has with her husband. The film is an exploration of love as well as young man finding out that the woman he’s with is having an open marriage with her husband. Starring Anton Yelchin, Berenice Marlohe, Olivia Thirlby, Lambert Wilson, Frank Langella, and Glenn Close. 5 to 7 is a majestic and fascinating film from Victor Levin.

Set entirely in New York City, the film revolves around a young writer whose encounter with a married French woman lead to an arranged affair between five to seven PM. It’s a film with a simple concept as it is largely told by this young man in his 20s who is trying to find himself as a writer but also find ideas to become a great one. Upon meeting this beautiful Frenchwoman in her 30s, he would have this affair but would have to meet between five and seven PM as he would learn that she is married to another man who is also in an open relationship with another woman. Victor Levin’s screenplay is largely told from the perspective of its protagonist Brian Bloom (Anton Yelchin) who is quite young as he hasn’t experienced enough with his life to create anything of worth in his desire to be a writer. When he meets Arielle Pierpont (Berenice Marlohe), he would gain some experience in this affair yet he becomes enamored by Arielle and her life. Though the script does follow scenarios that is typical of romantic-comedies, there are more complexities as it play into this arrangement as well as what it could for Brian’s future.

Levin’s direction is quite simple as it is shot on location in New York City and its various locations where it play into Brian living in a city where it’s known for giving birth to many writers as the city itself is a character in the film. Many of the compositions are simple with its usage of close-ups and medium shots to play into the intimacy of the scenes as well as in some of the parties. There are a few wide shots in the film yet Levin is more about Brian being part of Arielle’s life as she has two kids while introducing her to his parents who are baffled by this arrangement. The direction is also very playful as it owe a lot to elements of the French New Wave for much of the film’s first half that would include a lot of tracking shots yet the style would become more controlled and less stylized for the third act. Notably as it would play into Brian’s own view of the world and his own idea of love where things become complicated but there are things he would have to accept in his development as a man. Overall, Levin creates an engaging yet charming film about a young man’s affair with a married woman.

Cinematographer Arnaud Potier does excellent work with the cinematography in the way many of the rooms are lit from inside as well as the naturalistic exterior shots in the daytime. Editor Matt Maddox does nice work with the editing as it is mostly straightforward with a few jump cuts and montages in some sequences. Production designer Jeannine Oppewall and set decorator Susan Perlman do fantastic work with the look of the hotel suite Brian and Arielle would often meet at as well as Brian‘s quaint apartment and the lavish one Arielle lives in with her husband.

Costume designer Heidi Bivens does wonderful work with the costumes from the suits that Brian wears to the stylish clothes that Arielle wears. Sound designers J.M. Davey and Zach Seivers do terrific work with the sound as it is mostly low-key to play into the locations as well as in some of the parties that the characters go to. The film’s music by Danny Bensi and Saunder Jurriaans do superb work with the music as it‘s mostly a mixture of classical and waltz-based music with bits of jazz while music supervisor Laura Katz create a soundtrack filled with jazz, classical, and some French pop music.

The casting by Billy Hopkins, Ashley Ingram, and Heidi Levitt is great as it features appearances from real-life figures Julian Bond, Daniel Bouloud, Alan Gilbert, and David Remnick as themselves along with Milo Mungier Jacob and Brune de Drueille Senecterre in their respective roles as Arielle’s children Marc and Elodie and Eric Stoltz in a one-scene performance as the renowned editor Galassi. Glenn Close and Frank Langella are fantastic as Brian’s parents respectively in Arlene and Sam Bloom with Close as the more quirkier of the two while Langella is the more uptight who isn’t that fond of the relationship. Lambert Wilson is excellent as Arielle’s husband Valery as a man who loves his wife but also has a mistress as he tries to create a situation where everyone is happy as he also sees promise in Brian’s writing talents.

Olivia Thirlby is amazing as Valery’s mistress Jane as an editor who is able to help Brian sort out the arrangements of these affairs but also get him the chance to get his work published as she would be a friend to him. Berenice Marlohe is brilliant as Arielle Pierpont as a woman who meets Brian as she embarks on an affair with him as she learns about some of the aspects of American culture while becoming unsure if she can have a real relationship with him. Finally, there’s Anton Yelchin in a remarkable performance as Brian Bloom as a young writer trying to find experience in life as he meets and falls for Arielle while pondering if he can have a future with her despite their arrangements in Arielle’s open marriage.

5 to 7 is a marvelous film from Victor Levin that features incredible performances from Anton Yelchin, Berenice Marlohe, and Olivia Thirlby. It’s a romantic comedy that is very low-key yet is filled with some charm as well as some compelling ideas on open marriages and experiences for the young. In the end, 5 to 7 is an excellent film from Victor Levin.

I'm glad you liked this too! Great little film, I hope more people see it.

@Brittani-Agreed. More should see this film as it's just a nice little charming film.

I love the acting in this. It really sells the subject and lets you see it from so many perspectives, even with a little naivete.

@assholeswatchingmovies.com-I agree as it's not afraid to be naieve which adds to the development of the characters in the film.

Hey Steven, where did you find this film? I got it from Netflix (had to ask my friend to rent in DVD as it's not available streaming). I missed seeing this on the big screen when it was playing for one night as part of a local film fest. I'm glad I did though as I though it was an excellent, little seen drama that's well-written and well-acted. It made me sad that Anton is gone, he's terrific here.

@ruth-It was on Showtime/The Movie Channel. I had recorded it and decided to watch it as I didn't get to see it last year on TV.