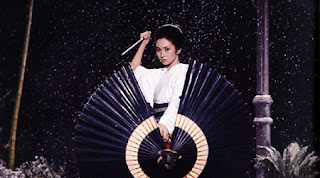 Based on the manga series by Kazuo Koike and Kazuo Kamimura, Lady Snowblood is the story of a woman who goes on a quest for vengeance by going after those who had raped and killed her mother and her family. Directed by Toshiya Fujita and screenplay by Norio Osada, the film is a simple revenge action-thriller set in late 19th Century Japan with Meiko Kaji in the titular role. Also starring Toshio Kurasawa, Masaaki Daimon, and Miyoko Akaza. Lady Snowblood is a gorgeous yet intense film from Toshiya Fujita.

Set in the Meija-era of 19th Century Japan where the country is in a state of transition from embracing the modernism of the West, the film is a revenge story of a young woman named Lady Snowblood who had lost her mother in childbirth as she goes after the three men and a woman who had killed her mother’s husband and son and raped her mother. It’s a film that doesn’t just play into this woman’s journey for vengeance but also watching Japan adjust to change where it’s the poor that is suffering from the changes while they’re being swindled by criminals taking advantage of the poor. Norio Osada’s screenplay begins with the birth of Yuki who would be raised by a cellmate of her mother’s and be trained by a priest in Dokai (Ko Nishimura). Though the narrative is straightforward as it’s told in four chapters, it does have a lot of usage of flashbacks.

It’s not just the usage of the flashbacks that help explain Yuki’s motivation as Lady Snowblood but also the narration would play into Japan’s history under the rule of Meija. It showcases a period that is dark where Japan would become modernized but allow itself to rid of the things that were known for. The flashback that showcases the four who would kill the son and husband of Yuki’s mother as the latter is mistaken for a rich man that is part of Japan’s elite because he’s wearing a white suit. Once the story goes into the main narrative where Lady Snowblood is trying to find and kill three of the four people, as her mother killed one of them before going to prison, that destroyed her family. There is that sense of restraint in Yuki where she is trying to figure out what happens if she does succeeds as there are also moments that would be challenging to her about what happens if her quest for vengeance isn’t fulfilled.

Toshia Fujita’s direction is definitely stylish not just for the visuals but also in the presentation of the violence which is quite gory but also has a beauty to it. Shot in various rural locations in Japan as well as in some sound stages, Fujita does maintain some unique imagery in the way he frames some of the locations but also how it play into Yuki’s own view of the world. While Fujita would use some wide shots to establish the locations, it’s in the medium shots and close-ups that help tell the story that include the opening scene set in the women’s prison where Yuki’s mother Sayo (Miyoko Akaza) is giving birth as it is then followed by a sequence of Yuki as Lady Snowblood killing a renowned mob leader. There are a lot of stylistic touches in some of the dramatic moments as well as in the presentation of some of the historical context where Fujita uses the actual pages from the manga series to help tell the story which also included animated recreations.

Fujita’s approach to the violence definitely contains a lot of blood that often sprayed out in body parts where it has this macabre tone to it where it’s funny in a dark way. Aided by sword choreographer Kunishiro Hayashi, Fujita’s usage of hand-held cameras doesn’t just play into the action but also the gracefulness of the way Lady Snowblood moves. Even in how she would conduct herself before an attack where she is carrying a purple umbrella with a katana inside as she comes in when one least suspects it. There are also moments that do play into some of the drama as it relates to the fallacy of vengeance as well as life after vengeance. The film’s climax is set in a lavish party scene that play into the emergence of modern Japan where it’s old and new ideas collide with Lady Snowblood representing the old rules. Overall, Fujita creates a ravishing yet gripping film about a young woman’s journey for vengeance.

Cinematographer Masaki Tamura does brilliant work with the film‘s cinematography with its gorgeous usage of color for not just some of the daytime exterior settings in the oceans and fields but also in some of the interiors and scenes at night including the scenes in the snow. Editor Osamu Inoue does amazing work with the editing with its usage of superimposed dissolves, jump-cuts, and other stylish cuts to play into the usage of the flashbacks as well as the way some of the violence is presented. Production designer Kazuo Satsuya does fantastic work with the design of the lavish house for the climatic party scene, some of the homes of the characters including the villages, and the gambling house where Lady Snowblood meets her first target.

The sound work of Noboru Kamikura is superb for the way it captures the way a sword is thrown or other weapons are used as well as the atmosphere in some of the locations and sets. The film’s music by Masaaki Hirao is incredible for its mixture of 70s style rock with some classical textures as well as pop balladry which include a few songs that play into Lady Snowblood’s journey.

The film’s wonderful cast include some notable small roles from Masaaki Daimon as Sayo’s husband, Hitoshi Takagi as a village leader in Matsuemon, Takeo Chii as one of the four criminals that raped Sayo in Tokuichi, Akemi Negishi as Yuki’s caretaker, and Mayumi Maemura as the young Yuki would be given brutal training in her quest for vengeance. Sanae Nakahura is excellent as the female crime boss Kitahama Okuno as a woman of corruption who took part in killing Sayo’s family while Noburo Nakaya is superb as Takemura Banzo as a former criminal who has become a gambling drunk that is filled with guilt. Yoshiko Nakada is terrific as Banzo’s daughter Kobue as a woman who is forced to become a prostitute due to her father’s debts as she would meet Yuki unaware of her intentions. Miyoko Akaza is fantastic as Yuki’s mother Sayo as a woman who would be raped and humiliated into the worst ways as she craves for vengeance for the loss of her husband and son while passing it to her baby Yuki.

Eiji Okada is brilliant as Gishiro Tsukamoto as one of the four criminals who raped Sayo as he is the most mysterious of the four as he is the one Yuki is looking for. Ko Nishimura is amazing as Priest Dokai as Yuki’s trainer who would give Yuki the tools and discipline in her quest for vengeance. Toshio Kurosawa is marvelous as Ryurei Ashio as a writer who is interested in Yuki’s story where he would publish it to the people as it would get him in a lot of trouble. Finally, there’s Meiko Kaji in a phenomenal performance as the titular character as this woman who is driven to avenge the death of her mother and her mother’s family as it is presented with great restraint but also with a cunning determination that is just riveting to watch.

Lady Snowblood is a tremendous film from Toshiya Fujita that features an incredible performance from Meiko Kaji in the titular role. Along with a great supporting cast, gorgeous visuals, a fantastic score, and gripping story on vengeance. It’s a film that has a sense of beauty in its presentation of violence as well as being a revenge film told in an evocative way. In the end, Lady Snowblood is a spectacular film from Toshiya Fujita.

Good stuff! I have this film on a watchlist of mine and I'm really anxious to see it. Shamefully I had never heard of it until accidentally running across it online.

@ruth-Oh, you will love it. It's got a strange sense of beauty in the way the violence is presented.

@keith71_98-I thank Quentin Tarantino for this. He was partially inspired by that film for Kill Bill and did a homage to it in the film's climax for the first film.

I heard about this film when I saw Tarantino discuss how it influenced Kill Bill. Now I really want to see it. My what intense eyes Meiko Kaji has!

@vinnieh-See it. It was on TCM recently although I'm not sure when it's coming back. If you have some money to blow for the next Criterion sale. Get the entire film set.