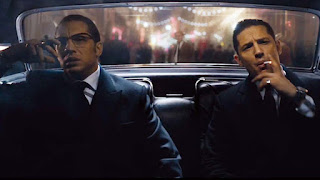 Based on the novel The Profession of Violence by John Pearson, Legend is the story of twin brothers who become infamous criminals in the 1950s/1960s as they would rise big and later fall. Written for the screen and directed by Brian Helgeland, the film is a look into the rise and fall of the twin brothers Ronnie and Reggie Kray who were infamous for their exploits in the world of crime as they’re both portrayed by Tom Hardy. Also starring Emily Browning, David Thewlis, Christopher Eccleston, Taron Egerton, Duffy, Paul Bettany, Colin Morgan, Tara Fitzgerald, and Chazz Palminteri. Legend is a gripping yet stylish film from Brian Helgeland.

Set mainly in 1960s London, the film is the simple story of the rise and fall of the twin brothers Ronnie and Reggie Kray who were the most dangerous and richest gangsters in all of London as they ran casinos and clubs to great heights. Yet, it is told by someone who knew the Krays in their rise as she would eventually become Reggie’s wife in Frances Shea (Emily Browning) where she would also see their fall in the late 1960s. Brian Helgeland’s screenplay is quite straightforward though it is largely told from Frances’ perspective in her voiceover narration yet it play into the Krays who may look alike and have violent tendencies but they’re both very different. Reggie is more organized as he also craves for a simpler and more straight life driven by his love for Frances while Ronnie is the more unstable of the two as he is mentally-ill and unpredictable as well as be openly-gay.

The script also play into the conflict where Frances often find herself in the middle as she represents the one person that can give Reggie a life away from crime which is something Ronnie doesn’t want. Ronnie wants to be a full-time criminal and stick to anyone that goes against them yet Reggie wants to maintain some control and make some money. Once their rise progresses, Reggie would eventually realize that Ronnie is a liability as he struggles to be a husband to Frances but also to watch over his brother. Still, Reggie wouldn’t expect how far Ronnie would play into their downfall.

Helgeland’s direction is simple at times but also quite stylish in some respects as it definitely captures the world of 1960s London where it is shot on location in the city as well as part of the East End area of the city. Much of Helgeland’s compositions in the wide and medium shots are simple to establish the locations yet he doesn’t shy away from how brutal some of the violence was back then. Helgeland would also create some element of style such as a sequence where Reggie has his first date with Frances where he would create this long tracking shot sequence in one take where Reggie would go to the back of a club to deal with business and then return to Frances. It is an inventive moment while there are elements of style that play into the world of 1960s club world where the people of power, wealth, and celebrity would hang out with gangsters as there is a sense of cool in that. When the film reaches its third act where it begins with a chilling moment of violence, it does play into this fall where it’s not just about a lack of control for Reggie but also Ronnie becoming more unruly as the film becomes more grim with the inevitable finally coming into play. Overall, Helgeland creates a mesmerizing and stylish film about the rise and fall of the Kray brothers.

Cinematographer Dick Pope does brilliant work with the film‘s cinematography from the way some of the daytime exteriors look as well as the lighting for many of the interior scenes set in the day at the pubs or at night for the clubs. Editor Peter McNulty does nice work with the editing as it is stylish with its rhythmic cuts to play into some of the action and violence while providing moments that doesn‘t stray into conventional fast-cutting. Production designer Tom Conroy, with set decorator Crispian Sallis and supervising art director Patrick Rolfe, does fantastic work with the design of the sets from the look of the clubs as well as the pubs and the homes that the characters live in. Costume designer Caroline Harris does excellent work with the costumes from the clothes of the men to the stylish dresses that Frances wears.

Hair/makeup designer Christine Blundell does terrific work with the hairstyles that the men had at the time as well as the array of hairstyles that Frances had. Visual effects supervisor Adam Rowland does some fine work with the visual effects which is mainly bits of set dressing and a few moments in the violence. Sound editor Dominic Gibbs and sound designer Ben Meecham do superb work with the sound from the way some of the violence is presented as well as the atmosphere of the clubs and social places the characters go to. The film’s music by Carter Burwell is wonderful for its mixture of lush orchestral music with some 60s style pop and rock music while music supervisors Liz Gallacher and Kirsten Lane create a fun soundtrack that feature a lot of the music of the times from Booker T. and the M.G.s, the Meters, Herbie Hancock, the Rockin’ Berries, Herman’s Hermits, Billy Preston, John Mayall & the Bluesbreakers, Burt Bacharach, Marvin Gaye & Tammi Terrell, and Duffy.

The casting by Lucinda Syson is incredible as it feature some notable small roles from John Sessions as a British lord that Ronnie would befriend, Aneurin Barnard as the famed photographer David Bailey, Sam Spruell as the incompetent associate of the brothers in Jack McVitie, Adam Fogerty as the Krays’ muscle Big Pat, Kevin McNally as the then-British prime minister Harold Wilson who has a problem with the Krays, Jane Wood and Jon McKenna as the parents of the Krays, Paul Anderson as Reggie’s lieutenant Albert, and Tara Fitzgerald in a wonderful small roles as Frances and Frank’s mother who doesn’t like the Krays. Colin Morgan is terrific as Frances’ brother Frank who is also a driver for the Krays while Paul Bettany is superb in a small role as a rival gang leader from South London in Charlie Richardson.

Chazz Palminteri is excellent as American mob figure Angelo Bruno who makes a deal with the Krays while giving Reggie some advice about laying low as well as what to do when family becomes a liability. Taron Egerton is fantastic as Ronnie’s right-hand man Mad Teddy who could possibly be Ronnie’s lover as he is quite psychotic but also prove to be loyal to the Krays. Christopher Eccleston is brilliant as Leonard “Nipper” Read as a detective hell-bent on nabbing the Krays any way he can while he would also deal with humility and the need for redemption. David Thewlis is amazing as Leslie Payne as the Krays’ business manager who tries to assure them what they can do and can’t do while making Ronnie paranoid.

Emily Browning is remarkable as Frances Shea as a woman who meets and falls for Reggie Kray as she understands what he does but still loves him know he can do good but becomes overwhelmed by his focus on the business and Ronnie’s behavior. Finally, there’s Tom Hardy in a phenomenal dual performance as the twins Reggie and Ronnie Kray where Hardy provides some distinctive ideas for the characters. In Reggie, Hardy is more restrained and charming but also can be quite brutal at times where Hardy plays it cool. As Ronnie, Hardy puts on a more warped physicality to his performance as well as wear glasses and have more of an accent than Reggie as he is very dangerous but also quite comical as it’s really a tour-de-force performance for Hardy.

Legend is a sensational film from Brian Helgeland that features an incredible performance from Tom Hardy as Reggie and Ronnie Kray. Along with a fantastic supporting cast, cool music soundtrack, and a fascinating premise, it’s a film that explores the world of the British gangsters in the 1960s and the struggle between two brothers in their own different ambitions. In the end, Legend is a marvelous film from Brian Helgeland.

Tom Hardy was so good in this. Browning was too, though her character was a bit thin. I liked it.

Great review! I was fascinated by how this was filmed. It's so easy to forget that the twins are both played by the same actor.

I saw this at TIFF a couple of years ago. I thought the film itself was a little disappointing, missed the mark in a few places, but Tom Hardy continues to blow me away. He's very, very good.

I feel like a dope because I've still never gotten around to seeing this. It sounds right up my alley too. Sigh....

This is a fascinating film thanks to Tom Hardy's double performances. I don't know if I'd be as impressed with this if it weren't for Hardy's casting.

@Brittani-I agree that they could've done more for Browning but I still liked what she did in the film.

@Allie Adkins-That is the mark of a great actor which is to disappear in a role unaware that it's him also playing the part.

@assholeswatchingmovies.com-Tom Hardy is definitely one of the best actors working today. He could read a phone book on a toilet and I would watch it.

@ruth-Tom Hardy is really the best thing in that film as he was just on his A-game and more with this film.

Tom Hardy is good in anything. Genuinely, the guy is on a very good run that keeps going. Goof for him as he has so much talent.

@vinnieh-Exactly. The dude is awesome and quite humble. We need more guys who can bring it while being cool.

Tom Hardy could seriously be doing anything, even the most mundane action and it would be entertaining.

@vinnieh-That is why Tom Hardy is one of the best actors working today.