For the third week of March of 2017 as part of the Thursday Movie Picks series hosted by Wanderer of Wandering Through the Shelves. We venture into the period of Ancient times from 3600 BC to 500 AD. A period in which was the formation of civilization, the birth of Jesus Christ of Nazareth, and the time of the Romans. There are many films based on that period and so here are three picks: 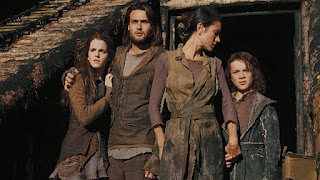 Darren Aronofsky’s 2014 film is definitely ambitious yet it manages to capture what life was like in biblical times where humanity was kind of in disarray. It is a flawed film yet it does have some sprawling visuals and a phenomenal cast that play into the early years of the formation of Earth. It is also a look into those early years of humanity and how chaotic it was forcing a man to do what is right for his family and for the animals who would bring life to a new world. 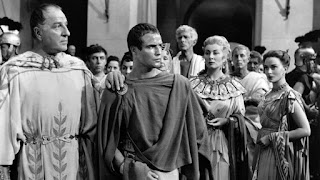 William Shakespeare definitely has a fondness for the period of the Romans as it’s no surprise that his story about the assassination of Julius Caesar is one of his most popular dramas. In this film version by Joseph L. Mankiewicz, it’s more about the men who were involved in not just Julius Caesar’s assassination but also the ones who want to avenge it. The casting itself is just tremendous with Marlon Brando as Marc Antony, James Mason as Brutus, John Gielgud as Cassius, Greer Garson as Calpurnia, Edmund O’Brien as Casca, and Deborah Kerr as Portia. It’s really a film that captures that moment in history into some of the unruly aspects of civilization. 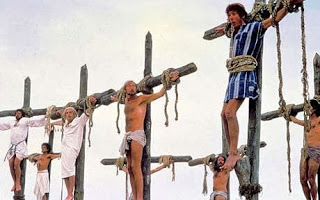 If there is anyone that would find humor in the period in which Jesus Christ would be a figure of importance. It would the comedy troupe Monty Python as the film was originally supposed to make fun of Jesus but it turned out he was too cool to be made fun of. Instead, the film is about a guy who was born a few homes away from where Jesus was born who is mistaken to be the Messiah. It’s truly one of the funniest films ever made as well as probably some of the best commentary about some of the fallacies of religion and faith.

Life of Brian is hilarious. What an awesome pick, that is. I wasn't a big fan of Noah, though. It was definitely ambitious, but I thought it missed the mark. Haven't seen Julius Caesar, somehow.

Noah was ok and the special effects were good but the trees and rocks reminded me of being in middle earth. I was not that taken with the film. I have to still see Julius Caesar and it's been on my list to see for a while. I love The Life of Brian and insider it brilliant. I remember all the news about it but I'm glad it has endured. It's just so funny.

Nice choices. Wish I could say I liked Noah but I struggled through it. I had been anxious to see it too since I'm a Crowe fan and also love Biblical movies but while some of the visuals were eye catching it never engaged me.

The Life of Brian is a goofy, irreverent piece of fun that only Monty Python could get away with.

Love the choice of Julius Caesar! I never even thought of it and it comes from my favorite period for these type of films. I know Brando was the big draw at the time, and he's decent as well as very fit but it's the rest of that amazing cast that was the pull for me.

As I said this is my favorite period for films set in antiquity, the very heart of the big budget, star laden Biblical epics crowned by The Ten Commandments (which I used already a previous week) so I cast about and pick a trio that I enjoy although I could have named probably 20 more!

Quo Vadis? (1951)-Huge, impressive epic of Nero’s (Peter Ustinov) reign and his persecution of the Christians. Against the broader scale of the story (with amazing sets and a literal cast of thousands) is the tale of Roman general Marcus Vinicius (Robert Taylor) who falls in love with the Christian Lygia (Deborah Kerr) and slowly adopts her religion, a very dangerous decision for the time. Vast in scope with pageantry and a human feel that can’t be replicated by CGI that thanks to the direction and performances, Leo Genn is particularly fine as Marcus’s Uncle Petronius, remains more accessible than many similar films of the period.

Land of the Pharaohs (1955)-Hooty nonsense about the building of the Great Pyramid in ancient Egypt. Packed with quality British actors, including Jack Hawkins, James Robertson Justice and Sydney Chaplin, extravagantly playing to the back row and best of all (well most campily of all anyway) a young and very beautiful Joan Collins vamping it up as the pharaoh’s wife Nellifer. To say she’s good would be a stretch but she sure is entertaining. The usually excellent Howard Hawks doesn’t seem to have a handle on the pace of the story so despite the florid ridiculousness of the picture it occasionally drags.

Demetrius and the Gladiators (1954)-Fictional sequel to The Robe picks up where that film ended. The movie follows two stories: faithful Demetrius (Victor Mature) the soldier converted to Christianity in the first picture is pressed into being a gladiator and catches the eye of the salacious Messalina (Susan Hayward) wife of Emperor Caligula’s uncle which causes a crisis of conscience. Meanwhile the mad Caligula pursues Jesus’s robe believing it to have magical powers. Star-studded if improbably cast (i.e. Ernest Borgnine as a Roman centurion) with future stars Anne Bancroft and Julie Newmar appearing briefly. Nicely produced if a bit overblown.

Noah is a great pick! I don't know if it's between the 3600 BC - 500 AD, but one thing for sure is it's great. Seems that Life of Brian is pretty popular this week. Monty Phyton is always best about it!

I've never seen Life of Brian but now I want to. I never got around to seeing the other two. I saw parts of Noah on TV though.

@Wendell-I love Life of Brian. I was laughing my ass off when I first saw it and I couldn't believe that George Harrison mortgaged his own house just because he wanted to see the film.

@Birgit-I'm glad someone else here loves Python as much as all of us.

@joel65913-Noah is a flawed film but still worth seeing as I'm glad you also like Julius Caesar. I've heard of Quo Vadis but I haven't had the chance to see it.

@Brittani-See Life of Brian or I shall stone you.

Some of the old historical epics are so wonderful and can't be bettered. Gotta love ancient times.