For the fifth and final week of March of 2017 as part of the Thursday Movie Picks series hosted by Wanderer of Wandering Through the Shelves. We venture into the world of TV period dramas. A genre of television that allows actors to wear costumes and play roles from a period in time that is probably foreign to them. It allows audiences to watch something on TV for a number of seasons to showcase a time period which would evolve in the course of a few years.

From HBO is one of the finest mob series set during the period of Prohibition in the 1920s in this fictionalized story about Enoch “Nucky” Thompson who ran Atlantic City as if it was a kingdom. It’s a show that is really unlike a lot of mob series where it’s rich in its imagery and has an amazing ensemble cast led by Steve Buscemi as well as standout performances from Michael Shannon, Gretchen Mol, Kelly MacDonald, Michael K. Williams, and Stephen Graham as a young Al Capone. It’s pretty much one of the finest shows HBO has ever produced.

A show that just recently ended due to a lackluster fourth season that kind of ran out of steam is about Dr. William Masters and Virginia Johnson in their exploration of human sexuality in the 1950s and 1960s. While it’s really a fictionalized story of what Masters and Johnson discovered, it is still a fascinating show thanks in parts to its two leads in Michael Sheen and Lizzy Caplan as well as an excellent supporting cast in Caitlin Fitzgerald and Annaleigh Ashford. Especially as it has a compelling story about the world of sex and what kind of led to the sexual revolution in the second half of the 20th Century. 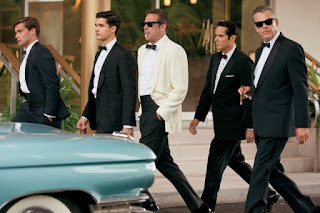 A show that is just really style over substance as it didn’t have enough of the latter to really become a show that people could enjoy. Despite some strong work from Jeffrey Dean Morgan, Danny Huston, and James Caan for its second season. It’s a show that is all flash and no gas as it is set in the late 1950s/early 1960s in Miami about a guy trying to run a hotel but stupidly borrows money from a mobster. It’s a show that’s really known more for gorgeous and nude women as well as young yet uncharismatic actors who never have anything to offer. It’s a show that had a nice idea but fails in its execution.

I also chose Boardwalk Empire. Masters of Sex always interested me, I'd like to check that out one day.

Yeah Morgan was great in Magic City but the series was lacking. I never saw Masters of Sex but I do love Michael Sheen. i really need to finish BEmpire one of those days, the first season of it is one of the greatest I've ever seen

I've seen an episode or two of Boardwalk Empire and liked what I saw but they were wildly out of sequence and I've never had time to go back to the beginning and watch properly. One day I will.

I haven't seen that last season of Masters of Sex yet but I enjoyed the first few. Love Michael Sheen and Lizzy Caplan and it has many good supporting players too.

Spot on about Magic City. I started watching with high expectations but it ended up being more of a flat pancake than a saucy souffle.

I like most films with some sort of period setting but the first thing I think about when I hear those words is British/BBC TV and that's the avenue I went down for the week.

Poldark (2015-present)-In the 1780’s Ross Poldark returns to his ancestral home on the Cornish Coast of England after fighting in the American Revolutionary War to discover in his absence the advent of several distressing facts. His father has died leaving their lands in disarray, he himself had been presumed dead and Elizabeth, the woman he loved in despair has married his cousin. Times are hard and Ross has to find a way to rise out of penury, resolve his feelings between the now out of reach Elizabeth and Demelza the woman he has turned to while dealing with a despicable and shameless foe. Brooding and frustrating at times but consistently interesting.

Call the Midwife (2012-present)-Wanting to help others young, well to do Jenny Lee becomes a midwife in London’s East End during the late 50’s and early 60’s. To do so she must live in a convent among sisters trained in midwifery as well and slowly loses her naiveté about the way the world really works. Terrific mix of pathos, joy, triumphs and sorrows played by a cast of great British actresses with nice period detail. Based on Jennifer Worth’s memoirs and narrated by Vanessa Redgrave.

The Grand (1997-1998)-As WWI comes to a close the Bannerman’s reopen the family’s hotel The Grand in London after a refurbishing done in hopes of revitalizing business in the postwar boom. They are also hoping to provide a comfortable return for their soldier son who has come back from war with what was then termed battle fatigue. However problems quickly arise forcing the inclusion of an unwanted partner. From here the series deals with the conflicts that arise within the family and the guests, some of whom are there for a day and others long term. The excellent ensemble includes the great Susan Hampshire and as the shell shocked son Stephen Moyer who is better known as Bill Compton from his years on True Blood.

I do want to see Boardwalk Empire and think Steve Buscemi is an excellent actor. I don't have much of a desire to see the other 2 and the last one reminds me of Mad Men.

I haven't yet seen the recent ones. Brideshead Revisited (1981) is a pretty great period drama series. It's considered Jeremy Irons' breakthrough performance.

Boardwalk Empire was great. I want to see Masters of Sex one of these days.

@Brittani-The first 3 seasons of Masters of Sex is awesome but the last one is a very mixed bag and isn't as interesting.

@Sati-Boardwalk Empire is one of the best shows ever as I too felt disappointed by Magic City as it never really gave Jeffrey Dean Morgan people and material to work with.

@joel65913-I totally agree with you on Magic City. The shows you mentioned are ones I haven't seen.

@Birgit-Magic City is really a sleazier yet poor man's version of Mad Men.

@Chris-I never Jeremy Irons did that. Thank you for the info.

@pilch92 15an meowing-Watch the first three seasons of Masters of Sex. That is all I have to say.

I loved Boardwalk but I still haven't seen the final series. Got much love for Buscemi!

I got through a few episodes of Master of Sex and got bored as I could see where it was heading, even the 'real life' element wasn't enough to keep my interest.

Aha Magic City. I liked the look of the cast but saw the plot and the fact its set in Miami and though, naahh.

@Katie Hogan-Glad to know there's another fan of Boardwalk and Buscemi.

I recently finished the 4th season of Masters of Sex. I wouldn't say it's a great series, but I like it enough.

@Wanderer-Masters of Sex is an excellent series but the last season was a total letdown.