For the fourth week of March of 2017 as part of the Thursday Movie Picks series hosted by Wanderer of Wandering Through the Shelves. We go into the subject of the underdog as it’s something that is kind of happening for anyone paying attention to the NCAA basketball tournaments where underdogs would upset heavily-favored colleges all over the U.S. This is a subject that obviously touches the heart of people where it’s always about someone or a team that seem like the kind of people you wouldn’t think would win anything but end up becoming something that we root for. After all, it took the Chicago Cubs more than one-hundred-and-seven years to finally win a World Series against another underdog team who hadn’t won a World Series in sixty-eight years in the Cleveland Indians. Here are some films that truly capture that spirit of the underdog: 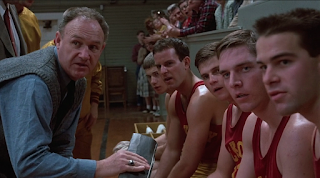 One of the great sports films ever made is set in a small rural town in Indiana where a former college basketball coach is given a chance to coach a high school team that definitely seemed like they’re destined to go nowhere. Yet, it has something that is engaging not just in its rural values of hard work and doing the best you can but also use what you have. It’s that idea is what makes the film unique where it doesn’t follow any real sense of narrative formula expected in underdog films while giving the audiences to care about as the film feature iconic performances from Gene Hackman and Dennis Hopper. 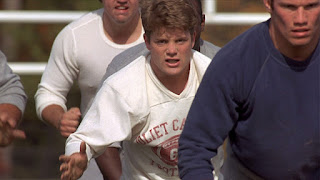 Another film that is directed by David Anspaugh and written by Angelo Pizzo who both did Hoosiers is also inspired by a true story but it is about a real-life person in Daniel “Rudy” Ruettiger who dreams about playing football for University of Notre Dame. While it’s a film that does take a few dramatic liberties, it is still an inspiring film about a kid who worked hard to play as a walk-on for the school he has always supported and would finally get to play a game in its final moments. It’s a film that has so much to offer as it’s filled with rich imagery and a great cast led by Sean Astin in the titular role as it’s my father’s favorite film. 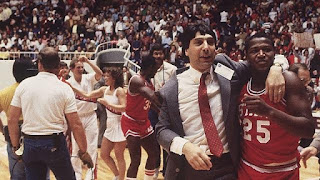 From the ESPN documentary series 30 for 30 is a film about real-life underdogs that can’t be scripted on a narrative feature. The film is about the 1983 college basketball team from NC State under the guidance of its coach Jim Valvano. It’s a film that is told by the players of that team who were going through a lot of bad luck and moments where they were close but unable to get the job done. It’s a very somber film as it is told thirty years after the championship win but also twenty years since Valvano’s passing from cancer as the team talks about what they had to do to make it to the NCAA championship and go against the much-heavily favored University of Houston that featured future basketball legend Hakeem Olajuwon.

I am never one about sports unless it is a comedy and done in a wild way like The Longest Yard with Burt Reynolds(the original) or the one film I picked. I have heard great things about Hoosiers but I just never felt the desire to see it or Rudy. I know I will pass on the documentary.

I never got what appeal Rudy had until I watched it, and really enjoyed the movie. I haven't seen your other picks but might give Hoosiers a go.

I love the idea of theme within theme! But, honestly, I've never watched any of this. I watched Hoosiers once but possibly only first 30 mins. I'm looking forward to watch it again soon.

We (including your dad) share a love of Rudy. Obviously, I love that pick. Of course, Hoosiers, another perfect fit. I really need to watch Survive and Advance since I don't live that far from NC State.

Oh I LOVE a theme within the theme!! It's funny I hate watching sports unless I can go to the actual game but I enjoy most sports movies. I think it's because they either focus on the competition or as these do the underdog story more than the sport.

I really liked Hoosiers. I remember when it came out and it resurrected Dennis Hopper's career-he had fallen on hard times and was appearing if at all in bottom of the barrel trash, his drug use had made him unreliable and even though he'd cleaned up it took years and the acclaim from this performance to set him back on the path to being a respected, employable actor.

It took me years to finally get around to Rudy. I'd had friends tell me it was just the best and was so sweet but it struck me as looking to be a sugar fest but while there was some amount of that when I finally did give it a look I found it very engaging.

I haven't seen the last and while I don't enjoy sports docs as much as sports films I have seen some I do like so I'll have to give this a shot if I can track it down.

All mine deal with competition in some way and I even have a sports themed one, hockey-my sport of choice if I'm going to go to a game but even that I don't watch on TV, but I love all three-my last is one of my all time favs.

Little Miss Sunshine (2006)-Young Olive (Abigail Breslin) has a dream shared by her grandfather (Alan Arkin). She wants to compete in the Little Miss Sunshine contest but that requires a road trip with her dysfunctional family, inventor dad Richard (Greg Kinnear), willfully mute brother Dwayne (Paul Dano), suicidal Uncle Frank (Steve Carell) and flustered mom Sheryl (Toni Collette). At first it looks doubtful but then they all pile into the van and go on a bumpy road to give Olive her chance despite the odds. Just quirky enough to be charming without wearing out its welcome thanks to a great cast all doing terrific work. Arkin won the Best Supporting Actor Oscar.

Miracle (2004)-The true story of Herb Brooks (Kurt Russell) the hockey coach who took the rough material that was the US hockey team and whipped them into Olympic gold medal winning shape. Wonderfully detailed with athletes rather than actors as the team mates, though they perform their lines well, and a powerfully convincing lead performance from Russell, one of his best. Despite the known outcome the film is quite involving and the end exciting.

October Sky (1999)-Homer Hickam (Jake Gyllenhaal) is just another backwoods teen in a slowly dying coal town in the 50’s until he witnesses Sputnik flying by one night. Filled with the wonder of space and encouraged by his young teacher Miss Riley (Laura Dern) he convinces his friends O’Dell & Roy Lee to work with him to try and build rockets. Enlisting the school outcast and brain Quentin they plunge in against many obstacles, including the stubborn resistance of Homer’s good but pigheaded father (Chris Cooper). Meeting with some success they determine to enter the national science competition in pursuit of college scholarships. A great film with tremendous performances full of determination to succeed against seemingly insurmountable odds and all around American can-doism with one of the most beautifully evocative and fitting scores ever.

I like the sports theme, even though I've never seen these. I've seen bits and pieces of Rudy and Hoosiers, but never the full films.

Everyone loves an underdog story. It's impossible not to relate to them when they're done well.

@Birgit-Never pass on a documentary or anything in the 30 for 30 series. A lot of them are really good. Hoosiers and Rudy are more than just sport films as they also have engaging characters.

@Big Screen Small Words-Hoosiers is a must as it's made by the same people who did Rudy.

@Paskalis-Hoosiers has a lot more to offer than just a basketball movie as it's also about redemption and the hope for a small town.

@Wendell-Check your listings on ESPN as Survive and Advance is definitely one of the best films of the 30 for 30 series.

@joel65913-I've seen all of those picks you mention and I like them all. My mother LOVES Little Miss Sunshine as does my late maternal grandmother. It's amazing that some of my parents' favorite films are the underdog films. October Sky is a film that I feel never gets enough due as it's really a magical film that features a young Jake Gyllenhaal.

@Brittani-See the full films. They really have something more to say than just being sports movies.

@vinnieh-I know. A lot of them work. It's something WWE isn't able to create as they keep shoving down some big and muscular Samoan Sissy and try to make him the underdog when he doesn't have the look or the humility to be the underdog. That's why Meekmahan, his stupid cunt of a daughter, and his dufus son-in-law in the Man w/ 3 Hs are just out of touch morons who don't know what the fans want and why this year's WrestleMania will suck. It's time for that company to become obsolete!!!!!

I haven't seen any of these, but they all look good.

@pilch92 15andmeowing-The first 2 films are must see as they definitely identify with the underdog theme.

Sport movies! This theme brings them all out! I've not seen any of these.