For the third week of April of 2017 as part of the Thursday Movie Picks series hosted by Wanderer of Wandering Through the Shelves. We focus on the subject of disappearances where people are trying to find someone who has either disappeared or has been taken away by someone. It’s a very unique subject as here are three films that definitely fit the bill. 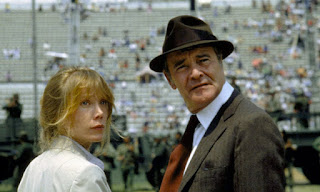 From Costa-Garvas is one of the finest political dramas about one of the darkest periods in world history set during the 1973 coup d’etat in Chile as it’s about a man and his daughter-in-law trying to find his son who had been taken by the authorities. It’s a very unique film that feature incredible performances from Jack Lemmon and Sissy Spacek as well as a startling commentary about this infamous event that included involvement from the U.S. in overthrowing Salvador Allende in favor of the more brutal regime of Augusto Pinochet. It’s a film many should see which includes a very heartbreaking moment inside a stadium filled with many people where Lemmon’s character talks on the microphone trying to find his son and expresses his own feelings of wanting him home. 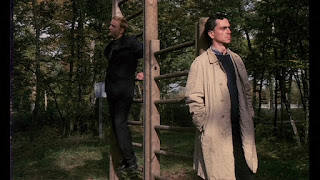 From George Sluzier comes one of the most chilling suspense thrillers ever about a man who tries to find his girlfriend after she had mysteriously disappeared. Based on the novel The Golden Egg by Tim Krabbe, the film isn’t just about this disappearance but also a study of humanity in its darkest ways. It’s a film that is most notable for learning about the man who kidnapped this young woman and why he abducted her as it ends up being something so fascinating that it is hard to root against him. It is truly a film that is just frightening to watch as it’s best to avoid the 1993 remake with Kiefer Sutherland, Jeff Bridges, and Sandra Bullock which is also made by Sluzier but with a lame ending. 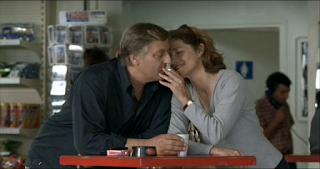 From Francois Ozon comes a film that is really one of his finest films of his career so far as well as the film that definitely introduced Charlotte Rampling to a new generation of filmgoers. It’s a film about a woman and her husband who go on a holiday where the husband goes swimming and doesn’t return. For the wife, she has no idea what happened as she returns home thinking he is still around but still wonders if he’s dead or alive. It’s just this very entrancing and evocative film that doesn’t just explore loss but also living alone and trying to move on as it is a film many people should see.

Under the Sand is a fantastic catch!! Moody, almost dream-like at times and unsettling it really is the film that started Charlotte Rampling back on a more prestigious footing for the second phase of her career. She's nothing short of hypnotic in it.

I've never seen this version of The Vanishing because I saw the remake and hate hated it. I've heard the original is vastly superior but since I found the entire premise repellent I won't be watching it.

We match!! Missing is so brilliant, one of my top 20 favorite films. Sissy and Jack Lemmon's performances are so incredibly lived in but they're surrounded by superior work. I particularly like Janice Rule's reporter, Melanie Mayron's friend of the couple and the disturbingly upbeat Richard Bradford as the acquaintance John Shea strikes up which sort of sets the whole story in motion.

I was so pleased when I saw the theme for the week since it allowed me to use Missing but my other two while I don't love them as much are good films.

Missing (1982)-A young American couple Charlie and Beth Horman (John Shea & Sissy Spacek) are living in Chile while he works as a freelance writer observing the political situation. Suddenly they are caught in a coup and when Beth returns home one day their house is ransacked and Charlie is missing. When word reaches the States his disapproving father Ed (Jack Lemmon) arrives looking for answers. Despite assurances by the authorities that everything is being done an unbelieving Beth and increasingly doubtful Ed begin their own search, as they come to understand each other at last Ed’s eyes are opened to facts that go against everything he believes in. Riveting fact based drama directed by Costa-Gravas earned four Oscar nominations-Best Actor & Actress for Lemmon and Spacek as well as a Best Adaptation and a Best Picture nod.

Without a Trace (1983)-Susan Selky (Kate Nelligan) helps her six year old son Alex get ready and watches him set off on the three block walk to school in their affluent New York City neighborhood but he never makes it. When he doesn’t return home at the appointed hour she slowly comes to the realization that something is terribly wrong and contacts the police. Both she and her husband (David Dukes) are immediately suspected, when it becomes clear they aren’t involved the police follow other leads but the case soon turns cold. For everyone that is but Susan who becomes so determined in her pursuit she pushes almost everyone including her husband and good friend (Stockard Channing) away. However with the assistance of one detective who also won’t give up (Judd Hirsch) she presses on determined to have some resolution whatever that may be. Exceptionally well-acted but a tough watch.

The Seventh Victim (1943)-Mary Gibson (Kim Hunter) arrives in New York City intent on locating her sister Jacqueline who has disappeared. As she starts searching she meets resistance from all quarters including her sister’s husband. As she delves deeper into the mystery she discovers a connection to devil worship and begins to fear for her own safety. Low budget noir produced by Val Lewton has a nice sense of dread and looks at a provocative subject for a forties film. This was future Oscar winner Hunter’s screen debut.

The Vanishing seems popular this week, but I haven't seen it. Surprisingly, there's a wide range of choices for this week's theme, isn't it?

Missing is another big film I have not seen and should since I remember all the brutality from that time since I was in my 20's in the 1980's. It was disgusting how many people went missing and were slaughtered. I have not seen athe Vanishing nor the last film with Rampling but that one sounds quite good. You know...it reminds me of poor Olivia Newton John who was engaged to this man and he went missing. It was all in the news and she looked devastated. Years later...years!! He was found alive, healthy and living a life. I think I would have slapped hi. Upside the head u til his nose was on the ground.

I've only seen bits of Missing from your picks. I've been meaning to see The Vanishing for quite a while and need to get on it.

All films sound fantastic; Under the Sand was the one that intrigued me the most.

I must say you make Under the Sand sound most intriguing. I'm going to give it a look.

I haven't seen any of your picks but I've added The Vanishing to my list.

@joel65913-I too saw the remake first which I thought was meh.... as it took me a long time to see the original version of The Vanishing as I was floored by it. I have no desire to revisit the remake. I'm glad you and I are on the same page for The Missing.

@Paskalis Damar-It's really one of the most popular films based on that theme as well as one of the finest horror films ever.

@Birgit-I heard about that guy who did that to Olivia Newton-John. I wouldn't slap. I'd beat the shit out of him for making me cause so much stress. What an asshole.

@Wendell-Make sure it's the original version of The Vanishing. Missing is a must-see as you watch Jack Lemmon pretty much give a lesson in acting.

@Big Screen Small Words-Under the Sand is pretty much one of my favorite films of Ozon and definitely gave me a crush on Charlotte Rampling.

@vinnieh-Oh, it's a gorgeous film to watch and also quite sexy.

@Brittani-See that and my other picks.

@Stephanie Marshall Ward-Oh, I totally recommend all three of those films.