For the second week of April of 2017 as part of the Thursday Movie Picks series hosted by Wanderer of Wandering Through the Shelves. We go into the world of rivalries. A subject that breeds all sorts of things whether it’s sports or for a man or for a woman. It’s always a fun subject to delve into as it always have so much at stake to see who is better. 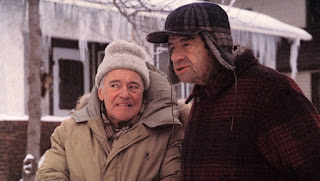 Jack Lemmon and Walter Matthau as a duo is gold though there’s a few films they’ve been in together that aren’t very good. Fortunately, this is one of their best collaborations about two old childhood friends/rivals who reignite a decade-long feud over the new neighbor played by Ann-Margaret. It’s a very funny comedy where Lemmon and Matthau both provided performances that isn’t just funny but also full of life showing two legends who not only still got it. It’s also a testament to two men showing everyone how it’s done. 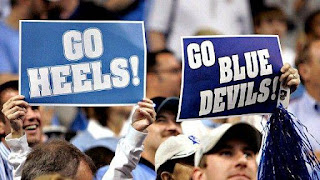 If there’s one major rivalry in college basketball that still looms to this day and it hasn’t gotten any softer. It’s the one between the University of North Carolina and Duke University who are separated by eight miles of road known as Tobacco Road. From HBO Sports that is narrated by Liev Schreiber is about this storied rivalry that began in the 1920s and reached its apex in the 1980s where UNC was coached by Dean Smith and featured a young player named Michael Jordan while Duke would come back to prominence under the coaching of Mike Krzyzewski. The film shows the intensity of these games as well as the devotion from its students where Duke has the most lewd and obnoxious fans that is called the Cameron Crazies. 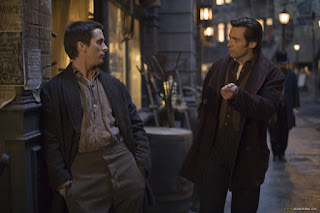 From Christopher Nolan comes a story of dueling magicians who both try to outdo each other in creating the greatest magic trick in the world. Starring Hugh Jackman and Christian Bale as these dueling magicians, it’s a film that really captures the art of magic and what some will do to create something extraordinary. Add a fantastic ensemble cast that includes Scarlett Johansson, Rebecca Hall, Michael Caine, Andy Serkis, and David Bowie. Nolan creates one of his finest films as it reminds people what he could do with a smaller story without the grandness of large budgets and visual effects.

Nice call going with Battle for Tobacco Road. I live pretty much between the two schools and yeah, people on both sides of the rivalry are certifiably insane. The Prestige has proven to be the most popular pick. Good movie, so no problem there. I haven't seen Grumpy Old Men. Just never got around to it.

While it certainly fits I never expected The Prestige to be the title of the week! Excellent film I guess I didn't realize its staying power.

I liked Grumpy Old Men more for the cast than the film itself. Still when those two team up it's always worth checking out. Add in Ann-Margret and it's irresistible.

Even a non sports fan like myself is aware of the Tobacco Road rivalry but I haven't seen that doc. Sounds interesting since it looks at the totality of it.

As you said rivalries go in so many directions it was a simple matter this week to come up with three that I liked.

The Count of Monte Cristo (2002)-Lavish version of the Dumas story of rivalry over a woman, one friend’s betrayal of another leading to an island imprisonment and the revenge extracted upon escape by the Count of Monte Cristo. Excitingly directed with beautiful production design and two robust lead performances by Jim Caviezel and Guy Pearce. A just starting out Henry Cavill has a prominent role in the latter half of the film.

Happy Gilmore (1996)-Temperamental and frustrated hockey player Happy Gilmore (Adam Sandler) discovers he needs to find some way to save his grandmother’s house. As he’s mocking someone for liking golf he finds he has a powerful swing and on a lark enters the PGA tour where he quickly incurs the enmity of a star of the circuit, Shooter McGavin (Christopher MacDonald). They become rivals for the prize with Shooter resorting to ever more drastic measures. Not a classic but from the period when Sandler was at least trying to make an effort to turn out entertaining films.

The War of the Roses (1989)-Oliver and Barbara Rose (Michael Douglas & Kathleen Turner) were once a happily married couple and through the years have acquired a couple of kids, a comfortable life and a beautiful home. But those days are over and while the two freely admit they want out of their commitment to each other what neither wants is out of their house. So begins a fierce combative rivalry for sole ownership with the lengths each will go to escalating to fearsome heights to emerge the victor as their divorce attorney D’Amato (Danny DeVito) takes it all in from the sidelines.

I have not seen the documentary but it's about sports so..meh. Now I love Grumpy Old Men and I couldn't have said it better myself. They were a class act. The Prestige is popular today but it really is a perfect fit for this week.

Great work man. Rivalry presents such an interesting theme in movies as it can be over anything. Affection, work or mainly competition, it provides a great backbone for a story to unfold.

Grumpy Old Men is a great pick for this theme. I haven't seen it in years.

@Wendell-I saw how insane it is. The Cameron Crazies.... talk about the most decadent and lude fanbase ever. I would recommend Grumpy Old Men if you want to watch a light-hearted comedy.

@joel65913-I've seen your picks as I really think you're dead-on with those 3. Happy Gilmore is a film I love as that was a time when Adam Sandler was tolerable and didn't rely on product placements too much into his films.

@Birgit-I would give sport documentaries a chance as it offers so much more than just sports.

@Brittani-It's on HBO/Cinemax so I guess it's a good time to see it again.