For the fourth and final week of April of 2017 as part of the Thursday Movie Picks series hosted by Wanderer of Wandering Through the Shelves. We venture into the world of television in shows about cops where audiences follow the police on the streets catching bad guys while having some fun. Here are my picks: 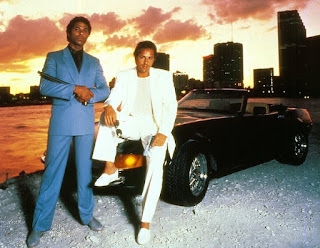 Definitely one of the most popular TV shows that defined the 1980s as it was shot on location in Miami and definitely changed the game about TV shows that revolve around cops. Sure, Sonny Crockett and Rico Tubbs didn’t wear police uniforms but they did look cool in those suits. It was one of the finest shows where it had a good five season run where it had a look of its own in terms of its setting as well as employing some of the music of the times to help give it its own distinct flavor. 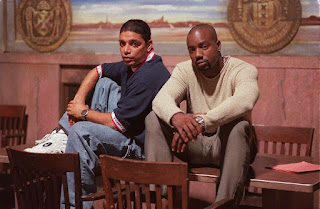 For a lot of shows in the 1990s that seems to never get its due, this one from FOX is probably the one TV show about cops that is never in the conversation. It is a very different show that revolved around New York undercover cops that didn’t have white actors being the leads as the two leads were played by an African-American and a Hispanic-American. It played into the world of drugs and gangs where two guys from the streets try to do what is right but also have issues at home as it has a realism that was lacking with most TV shows. It had a great run for its three seasons but once Michael de Lorenzo’s character was gone for the fourth and final season. It wasn’t the same show. 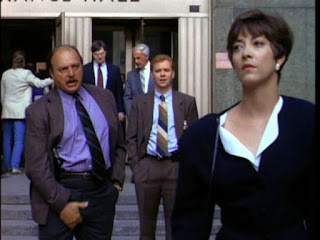 Definitely one of the most popular show of the 1990s, it was a show that drew some controversy for featuring bits of profanity and nudity including the bare ass of Dennis Franz. It’s a show that was quite risky for network television but it definitely made for interesting television as it was willing to push the edge of what could be done as it did give the show some realism. Plus, it had some interesting stories about what cops do in and out of the job while also showing how stressful their job is.

NYPD Blue was so huge and I was never one for Caruso and I really didn't want to see Franz's ass:) I did see a couple of those episodes but never got into it. Same with your other picks. I. Surprised no one picked Hill Street Blues....the big show from the 1980's

Miami Vice was such a huge trendsetter and set the look of its time until it became a cliche. It wasn't a bad show but fell victim to its own success. I tried to watch a couple episodes a few months ago and just couldn't do it they were SO very dated. Still miles better than the dreadful film adaptation.

I didn't come to NYPD Blue until a couple of years into its run, when Caruso, who I can't abide, exited I entered. It had its titillating bits but was based on solid storytelling which kept it fresh. Many good performers came and went...or stayed but the emotional center of the show was Dennis Franz who was quite brilliant every week.

I've never seen a second of New York Undercover, but with the plethora of cop shows I'm not surprised at any I've missed today.

Talk about your wide open theme, the choices are nearly limitless which makes it fun to see what others watched and maybe find something new. I went with a couple of favorites and a perennial.

Life on Mars (2008)-In present day New York City detective Sam Tyler (Jason O’Mara) is pursuing a suspect when he’s struck by a car. When he awakens he finds himself in the same spot but it’s 1973! Already dressed in 70’s clothing he heads to his precinct where he’s mistaken for a transfer and put to work, now he has to figure out what happened while adjusting to his new surroundings and still chasing criminals alongside cops that have rougher methods than he’s use to. Intriguing series has a great cast, Harvey Keitel, Michael Imperioli and Gretchen Mol among others, terrific period detail and soundtrack but fell victim to poor scheduling which lead to its short duration.

Wiseguy (1987-1990)-Government agent Vinnie Terranova (Ken Wahl) is fresh out of jail where he was placed by the Organized Crime Bureau (OCB) to give him a criminal history to enable him to go deep undercover to break up big syndicates. Guided by his often exasperated but understanding boss Frank McPike (Jonathan Banks) and wheelchair bound remote liaison “Lifeguard” (Jim Byrnes) he sets out to crime bust while trying to keep his secret from his mother (Elsa Raven). Excellent series told its stories in multi episode half season arcs focusing on one set of characters. All were good but the initial season’s two arcs dealing with the empire led by Sonny Steelgrave (a commanding performance by Ray Sharkey) and the draconian deeply twisted Profitt siblings (two showpiece turns by Kevin Spacey and Joan Severance) are by far the best.

Dragnet (1951-1959/1967-1970)-“Dum...da.dum...dum-Ladies and Gentleman the story you are about to see is true, the names have been changed to protect the innocent….This is the city-Los Angeles, California…I work here, I’m a cop…my partner’s Frank Smith, my boss is Captain Glavas my name is Friday.”

So began every episode of this Jack Webb series which he created and in which he starred giving a performance of amazing stolidness handing out his standard catch phrase “Just the facts, mam”. Initially taking a documentary approach before switching to a more standard form of storytelling of solving crimes this is the granddaddy of police procedurals.

I've heard of all your picks but I haven't watched anyone of them myself. I've seen a bit of NYPD Blue at least.

I've heard so much over the years about NYPD Blue.

Nice choices. I remember my prom date had a Miami Vice tux :)

I don't think I've heard of New York Undercover before.
NYPD Blue I have seen a bit, but can't remember anything.

@Birgit-I saw some episodes of NYPD Blue but wasn't a big fan of it as I did like what it did though I too didn't want to see Dennis Franz's ass as I was more interested in Sharon Lawrence.

@joel65913-I like to go outside the box with my choices as it allows me to do something different. I know about Dragnet and Wiseguy but I know little about Life on Mars.

@Brittani-I admit, cop shows aren't my thing so I just went with the ones I've seen and know of.

@vinnieh-I think if you're into cop shows and racy language. It's the show for you.

@pilch92 15andmeowing-Did he look good in that tux?

@Wanderer-New York Undercover is an underrated show as I think it succeeded because it appealed to minorities who wanted something of their own they could watch which is what FOX was good at doing.