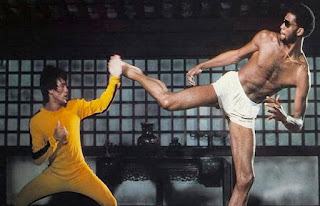 Directed by Robert Clouse with some action scenes by Sammo Hung and written by Clouse and Raymond Chow under the Jan Spears pseudonym, Game of Death is the story of a martial arts movie star who is targeted by a crime syndicate as he fakes his death to go after them and protect his girlfriend. Originally meant to be Bruce Lee’s directorial debut in the same name, the film incorporates some of the footage from the film Lee was making before his death into a new story that would include scenes with Lee and basketball legend Kareem Abdul-Jabbar with a lot of new footage from Clouse. Also starring Colleen Camp, Gig Young, Dean Jagger, and Hugh O’Brian. Game of Death is a riveting though messy film from Robert Clouse and Sammo Hung.

After refusing to do more work for a syndicate for a legitimate life as an action film star, the film revolves around this man who has been targeted by a Hong Kong crime syndicate who wants him dead as well as threatening the life of his singer girlfriend. After being shot on a film set where he was presumed death, the actor Billy Lo would survive as he fakes his death so he can deal with the syndicate head on. The screenplay that Clouse and Chow write would follow a simple storyline as it plays into this actor going after the crime boss Dr. Land (Dean Jagger) and his main henchman Steiner (Hugh O’Brian) while the few that knows he’s alive is the journalist Jim Marshall (Gig Young) who also watches over Lo’s girlfriend Anne (Colleen Camp).

Robert Clouse’s direction does have moments that are exciting as well as scenes and compositions that help tell the story. Yet, it’s messy due to the fact that he only uses very little of what Bruce Lee was doing with the original film with the exception of three scenes where Billy Lo was fighting Dr. Land’s three henchmen though it’s truncated in some spots. Shot on location in Hong Kong and parts of Macau, Clouse’s direction is quite straightforward though many of his shots involving the Lo character are often seen in wide and medium shots with Kim Tai-Jong and Chen Yao-po as doubles for Lee where they would often wear big sunglasses or seen from afar though there’s time you do see their faces where it’s obvious that it’s not Bruce Lee. Hung’s direction for the fight scenes is also similar in terms of trying not to have the close-ups of the doubles that include Yuen Baio for some of the acrobatic stunts of Lo.

Clouse would use footage from other films that Lee was in such as Fist of Fury and The Way of the Dragon for a few scenes of the film that Lo is making as the latter feature bits of Lee fighting Chuck Norris for the film’s opening sequence. There are moments in the film that do feel awkward at times where there’s Lee’s head superimposed on an actor’s head in one shot for a scene where Lo is being lectured by Steiner. It’s a moment that does take out some of drama and suspense while there are a few other parts of the film that would feature close-up of Lee from other films that don’t fit in with the footage that Clouse and Hung are creating in the action and suspense as it does create a sense of continuity errors that do become noticeable. Even as Clouse would use footage from Lee’s funeral for a scene is something that feels wrong and very unnecessary. Despite these flaws, Clouse and Hung do manage to create something that Lee would’ve made though the actual film by Lee in its in-completed form is more entrancing in its sense of fluidity and careful choreography through the fight scenes. Overall, Clouse and Hung create an engaging but flawed film about a movie star faking his death to fight a crime syndicate.

Cinematographer Godfrey A. Godar does nice work with the cinematography despite some of the visual continuities in matching the unfinished footage with the finished footage visually. Editor Alan Pattillo does some fine work with the editing although it does dwell into some fast-cutting to take out some of the things in the fight that does raises question into its continuity. Sound recordist Danny Daniels does superb work with the sound in capturing some of the action and sound effects despite some of the fake yells for the Lo character. The film’s music by John Barry does some excellent work with the usage of strings and bombastic percussions to play into the action and suspense as it’s one of the highlights of the final film.

The film’s cast does feature some notable small roles from Mel Novak as an assassin named Stick, Robert Wall as a brutish fighter/henchman of Dr. Land in Carl Miller, Sammo Hung as Miller’s opponent in a fight, Dan Inosanto and Ji Han-jae as a couple of men that Lo would fight, and Kareem-Abdul Jabbar as the tall henchman known as Hakim. Gig Young is excellent as Lo’s journalist friend Jim Marshall as one of the few that Lo can really trust while Colleen Camp is wonderful as Lo’s girlfriend Anne as this singer who is forced to see the actions of the syndicate up close. Dean Jagger’s performance as Dr. Land is weak as he’s just this old man that just orders people and feed his fish while Hugh O’Brien is terrific as his lead henchman Steiner as a guy with a blade inside his cane. The performances of the men playing Billy Lo can do cool stunts but they don’t really showcase the essence of Bruce Lee while Chris Kent’s dubbing as Lo is pretty lame.

The unfinished version of Game of Death that was written, directed, and starring Lee that was shot by cinematographer Tadashi Nishimoto and edited by Peter Cheung with music by Joseph Koo and Peter Thomas is a very different film from what Clouse and Hung created. Though Clouse and Hung used 11-minutes of what Lee had filmed, the thirty-eight minutes of material that Lee had filmed is way more compelling than the final product. It revolves around a retired martial arts champion named Hai Tien who is coerced out of retirement to enter a game of death at a South Korean pagoda where he is to face five masters as each level feature a master that is very difficult. Three of the five levels were filmed as it features a Dan Inosanto as the third-floor guardian, Ji Han-jae as the fourth-floor guardian, and Kareem-Abdul Jabbar as the fifth-floor guardian Mantis though he’s re-named as Hakim in the final version of the film. Tien is joined by two other men in this game in Mr. Tien (James Tien) and Mr. Yuan (Chieh Yuan) who would participate in fighting the fourth and fifth guardians.

Whereas Hung’s direction for the fights are messy due to the mixture of footage with Lee and the recreated footage with the doubles. The fight scenes by Lee is more engaging as Cheung’s editing offers so much in terms of what is happening as well as getting the sense of rhythm in the fighting to play into its suspense and drama. Even in the climatic showdown with Mantis where there’s so much attention to detail in the drama as well as the room where the fight is happening. The performances of Jabbar, Inosanto, and Han-jae are given more attention as they show not just their skills but also the sense of respect in the fight itself. Especially as Lee showcase what it at stake as an example of what he was aiming to do as he also gives this incredible performance as a fighter where Lee displays that air of charm and toughness.

The finished version of Game of Death is a stellar but flawed film from Robert Clouse and Sammo Hung. Despite its good intentions along with some nice action sequences, it’s a film that is bogged down by some continuity issues as well as the fact that the doubles playing Bruce Lee aren’t that good. Lee’s unfinished version of the film is far more interesting as it show what Lee was hoping to do as it has something much grander. In the end, the final version of Game of Death is a good film while the unfinished version of the film is spectacular all from the mind of the legendary Bruce Lee.

Related: The Big Boss - Fist of Fury - The Way of the Dragon – Enter the Dragon

This movie is such a mess. I find it all sorts of terrible starting with the fiasco of having three different dudes try to stand in for Bruce Lee and the issues they had working around this. The fight scenes with the actual Lee are great. The rest...no. I haven't seen the 38 minute version, though. I'll have to seek that one out.

Wow, you liked this one a lot more than I did. I found it way too messy to be enjoyable. The actual footage with Lee was very good, but everything else felt really thrown together (which it sounds like it was). Even the dependable John Barry created a score that is OK, but doesn't really help bring the movie together. Such a shame that this was the last film Lee worked on. To me, this one was a real dud. That said, I really liked your review and your deep dive into it! We'll agree to disagree on this one. :)

@Wendell-I found the 38-minute unfinished version on YouTube and believe me. It is worth seeing. Not only is Lee great in this as well as Kareem. It just offers so much more to the story and not deal with these awkward continuity issues the final film had.

@Roman J. Martel-It was alright but I much prefer the unfinished version that Lee made as I think if he had stayed alive. He would've made a masterpiece.