For the fifth and final week of August 2017 as part of the Thursday Movie Picks series hosted by Wanderer of Wandering Through the Shelves. We go into the world of television revolving around shows set in high schools. Shows that would give children the idea of what high school was like and the struggles they would get into. Unfortunately for those of us who lived through high school, some of those shows presented a very false reality. Here are my three picks:

1. Saved by the Bell 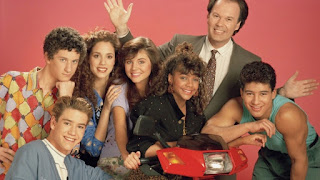 Originally began as a show starring Hayley Mills for the Disney Channel set in middle school, it would become this popular show that was big in the early 1990s on NBC’s Saturday morning program. It is about six kids spending their time in a high school in California as you had the cool troublemaker, the straight-A student addicted to speed, a cheerleader, a fashionista, a jock who might be gay, and a geek named Screech. It had moments that are funny though its depiction of real-life issues about drugs, alcohol, and all sorts of things just make the show very heavy-handed. 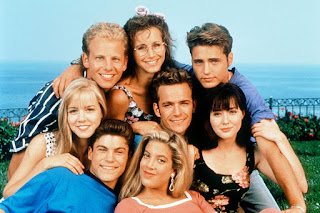 This is a big guilty pleasure for me as I had a thing for Jennie Garth who is still a fine-looking woman. The first few seasons revolved around kids at a high school in Beverly Hills with two of them in siblings from Minnesota who befriends some rich kids as they become part of this circle of friends that also includes a geeky kid and a Jewish nerd who doesn’t live around Beverly Hills. It was a good show that I personally thought improved when Shannen Doherty was replaced by Tiffani-Amber Thiessen who was far more interesting. Then it went off the rails for some odd reason after college and just became shit. 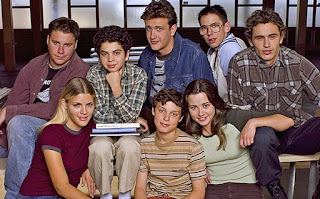 Now this is a show that came out the year after I had finished high school and never saw it until years later as I wondered why the fuck did this show never existed when I was in high school and why did it get canceled after one season? Though it’s set in the late 70s and early 80s, it is this show that is more about misfits who don’t fit in with certain cliques as well as struggle with growing pains. Even though it’s presented in a comedy, there’s elements in the show that really played into truths about the struggle to fit in, to try and be cool, and to do right in school. Probably why it only lasted a season is because NBC found it to be too real and couldn’t deal with it which is a shame though the fact that it’s being discovered years later as this overlooked gem makes the show even more special.

I've heard so much about Freaks and Geeks.

Great picks, I grew up with Beverly Hills 90210, everyone my age was watching it in the 90s.

Me too, Freaks & Geeks I didn't discover until I was in my 20s, a classic that was cancelled too soon. Characters I cared about, and the late 70s and early 80s was a great era for music.

Oh Geez Saved by the Bell! I started watching that when it was still Good Morning, Miss Bliss because of Hayley Mills and stuck with it for a while but it became increasingly silly and I bowed out. I remember looking in once after a couple of years away and Zack and Slater and all the rest were perhaps the oldest seniors possible. I was a very casual watcher of 90210 but never enough to really know what was going on and Freaks and Geeks came and went so fast I again never really got a chance to give it much of a chance.

Skins (2007-2013)-British series about a group of teens in Bristol going through what is known there as sixth form which in the US would be high school. Controversial when it was showing for its graphic depictions of sexuality, drug abuse, bullying and many other issues with more than its share of nudity. Well-acted but grim. Another element of its notoriety was the casting in one of the leads of Nicolas Hoult who at the time was most well known as the youngster in About a Boy.

I only saw snippets of Saved By The Bell and had no desire to see it. The same with 90210 which I thought was just stupid to be honest. I love Freaks and Geeks and we match! I think this is the popular one for this week and glad it is.

Freaks and Geeks was the go-to pick this week. Im

Sorry for the double post. My phone is extra sensitive and I breathed on the publish button too hard.

Anyhoo, I was just saying I'm starting to regret not having ever watched Freaks and Geeks given how popular they are this week.

Those other two shows? I hate both of those fuckers with a passion.

I love Freaks and Geeks! I watched a lot of Saved by the Bell as a kid but it was never one of my favorites. I missed 90210 but saw a few eps because my sister was obsessed with that and Melrose Place.

Everyone was obsessed with Saved by the Bell, I never really got into it. I did enjoy Freaks and Geeks when it became available in the UK.

@vinnieh-It's a show that I believe captured some of the realities of what high school was really like and yeah, high school sucked.

@joel65913-I've seen My So-Called Life as it was a good show as it was a favorite of my sister who had a major crush on Jared Leto.

@Birgit-Saved by the Bell and Beverly Hills 90210 is something where if I was a parent. I wouldn't recommend that show to kids as I feel it presents a very false idea of high school life. I'd have them watch Freaks & Geeks because it's more honest.

@Wendell-I can see why you would hate those 2 shows as I would agree with you as they presented people who didn't look like high schools at all as you couldn't really relate to them. I think that's why I look at those shows with a sense of disdain nowadays.

@Brittani-Melrose Place was a good show because it was trashy and fun. I'm glad there's a lot of love for Freaks & Geeks.

@Katie Hogan-Saved by the Bell is a show that I think appealed to teens wanting to see something they think is the idea of what high school would be in America. It is totally false. Plus, I never belonged to any cliques in high school as I pretty much hated everyone in high school and had very few friends. High school sucked.