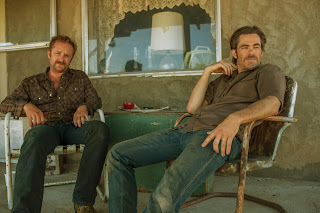 Directed by David Mackenzie and written by Taylor Sheridan, Hell or High Water is the story of two brothers who decide to rob banks to save their family ranch as they are being pursued by two Texas Rangers. The film is a crime thriller set in West Texas as it play into a battle between brothers and the two men trying to go after them. Starring Ben Foster, Chris Pine, Gil Birmingham, Marin Ireland, Katy Mixon, Dale Dickey, and Jeff Bridges. Hell or High Water is a rapturous yet gripping film from David Mackenzie.

A series of robberies in West Texas prompts an aging Texas Ranger and his new partner to investigate these robberies as they’re unaware that the two robbers are brothers trying to save their family ranch by robbing the banks that is taking away the ranch. It’s a film that play into a world that has two brothers becoming desperate over a reverse mortgage as the family ranch is about to foreclosed as the timing of it is bad since their mother had passed three weeks earlier. They would rob banks and go to Indian casinos to use the money to gamble and then use that money as a check to the banks they stole the money from. Taylor Sheridan’s screenplay is definitely play into the motivations of Toby Howard (Chris Pine) and his older ex-con brother Tanner (Ben Foster) as the latter wants to help his younger brother save the ranch as Toby is aware of how rich the land is and wants to pass it on to his sons.

While Tanner is definitely more experienced in robberies as he would do all of the yelling and intimidation tactics, it is Toby that remains quiet and makes sure things go quietly as he knows what he has to do for his sons and his ex-wife Debbie (Marin Ireland). Being aware of these robberies is Marcus Hamilton (Jeff Bridges) who is days away from retirement as he is joined by his new partner Alberto Parker (Gil Birmingham) as they drive around various small town in Texas wondering where the next bank will hit. Sheridan’s dialogue and portrayal of characters is key to the film in the way he portrays the Howard brothers as well as Hamilton as men who carry old ideas of the west where Hamilton does say politically-incorrect things toward his half-Native American/half-Mexican partner as well as the fact that he believes these robbers are robbing these specific banks for a reason. Especially as Parker says something about what is happening as there is a hint of irony into what the brothers are doing as it relates to how the Native Americans lost their homes except that things are much darker and more complicated.

David Mackenzie’s direction is definitely ravishing in the way he captures this feel of the American West in not just its vast beauty but also for being this area that is disconnected by the major cities of America where many of these small towns become stricken with poverty and almost become some short of ghost town. Shot on various locations in New Mexico as West Texas, the film does play as this idea of the West in a modern setting where Mackenzie would use wide shots to capture the beauty of these locations from the shots of the deserts and mountains. The locations don’t just play to this decline of the West due to modernism but also for the fact that the old ways are gone as it’s something the Howard brothers seem to fight for as it relates to their ranch. Mackenzie would use some close-up and medium shots to play into the characters interacting with each other as well as some long shots to capture the action as it plays out.

Even as Mackenzie would create elements of tension and dark humor in the film as some of the violent moments are restrained until the third act. Notably as there is an element of suspense and terror that looms throughout the film as Hamilton and the Howard brothers never interact or see each other. It just adds to this air of suspense as a showdown is inevitable but also play into the idea of what had been lost in the West prompting these two forces to finally meet and see what it’s all about. Overall, Mackenzie creates a gripping yet haunting film about a Texas Ranger trying to capture two brothers who are robbing banks to save their family ranch.

Cinematographer Giles Nuttgens does brilliant work with the film’s gorgeous cinematography to play into the sunny and dream-like look of the Texan skylines as well as the usage of unique lighting for some of the interiors including some of the scenes in the casinos and natural lighting for a restaurant Hamilton and Parker go to. Editor Jake Roberts does excellent work with the editing as it is straightforward with some rhythmic cuts to play into the suspense. Production designer Tom Duffield, with set decorator Wilhelm Pfau and art director Steve Cooper, does fantastic work with the look of Howard family ranch as well as some of the places that the characters go to.

Costume designer Malgosia Turzanska does nice work with the costumes from the cowboy-like clothes of the Howard brothers to the Texas Ranger uniform that Hamilton and Parker wear. Sound designer Frank Gaeta does amazing work with the film’s sound as it play into the suspense and some of the natural elements of the locations. The film’s music by Nick Cave and Warren Ellis is incredible as its mixture of eerie strings and keyboard music play into the drama and decline of the West as it is a major highlight of the film while director David Mackenzie and editor Jake Roberts supervise the film’s soundtrack that mainly features a mixture of country, rock, and blues.

The casting by Jo Edna Boldin and Richard Hicks is wonderful as it feature some notable small roles from screenwriter Taylor Sheridan as a cowboy getting his herd of cows out of a field fire, John Paul Howard and Christopher W. Garcia as Toby’s sons, Amber Midthunder as a young bank clerk, Melanie Paplia as a hooker trying to flirt with Toby, Alma Sisneros as a hotel clerk that Tanner woos, Dale Dickey as a bank employee who is taken hostage in the film’s opening sequence, Katy Mixon as a restaurant waitress that tries to woo Toby, and Marin Ireland as Toby’s ex-wife Debbie. Gil Birmingham is fantastic as Alberto Parker as Hamilton’s new partner who bears the insults that Hamilton gives him while dealing with the severity of the case as well as bringing his own insights about the ways of the world. Ben Foster is brilliant as Tanner Howard as the eldest of the two brothers who has been convicted for robberies and such as he knows how to rob banks as he’s a little unhinged but is also someone that is vulnerable as it relates to his own troubled relationship with his parents.

Chris Pine is amazing as Toby Howard as the younger of the two brothers who is also a father as someone who is levelheaded as he laments over the situation he’s in as well as making sure his sons don’t go through the struggles he went through as a child. Finally, there’s Jeff Bridges in a phenomenal performance as Marcus Hamilton as a Texas Ranger who is about to retire that takes on this case as he doesn’t just deal with the area he’s in but also the changes of the landscape that haunts him as well as his own ideas of why these robberies are happening.

Hell or High Water is a tremendous film from David Mackenzie that features great performances from Jeff Bridges, Chris Pine, and Ben Foster. Along with its brilliant ensemble cast, Taylor Sheridan’s riveting script, the chilling score of Nick Cave and Warren Ellis, dazzling visuals, and top-notch suspense. The film is definitely an unconventional yet evocative suspense-thriller that also acts as a true western. In the end, Hell or High Water is a spectacular film from David Mackenzie.

I can't wait to rewatch this one!

This is such a great film, I never expected to enjoy it as much as I did.

I still wish Ben Foster would've been the one with the Oscar nomination for it though. Bridges didn't do anything spectacular.

Despite all the high praise I wasn't expecting much when I watched it. I was very wrong. This one blew me away. I really enjoyed it. Glad you did, too.

@Brittani-I would agree with you although Jeff Bridges is pretty much an American icon at this point as you would expect a lot from him to give out great performances.

@Wendell-Same here. It was better than I thought and now I want to see Wind Rider.

Great review! I love western films, and though this isn't my favorite, I really like the way it was filmed and the performances were great. It was nice to see Pine in something other than a cavalier-romantic-hero role. :)

@Katy-You're welcome. Chris Pine is becoming someone who can play gritty roles and show that he's got a lot more to offer than be a pretty boy. I would say he's a pretty man. Now that is someone I would go gay for.