For the fourth week of August 2017 as part of the Thursday Movie Picks series hosted by Wanderer of Wandering Through the Shelves. We go into films revolving in or around the stage whether it’s about a play being set on the stage or the stories of what is happening in and around the stage. Here are my three picks: 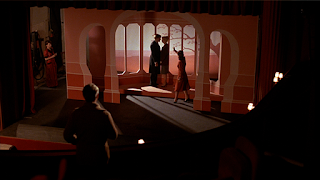 From the late, great Francois Truffaut comes one of his last great achievements in cinema set during Nazi-occupied France in World War II. While it is about a woman hiding her Jewish husband in a theater, it does revolve mainly around Catherine Deneuve’s character to try and keep the theater by staging a play where Denueve’s character falls for one of the new actors in company played by Gerard Depardieu. It’s a film filled with elements of humor and drama as it is one of Truffaut’s great films which is also complimented by the gorgeous cinematography of the late, great Nestor Almendros. 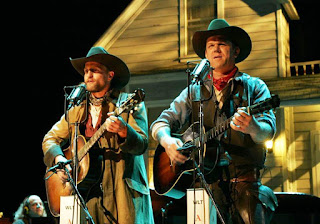 Robert Altman’s final film is definitely a quintessential Altman film in terms of its broad ensemble cast, overlapping dialogue, and sense of looseness that happens throughout the film. It is all set in Garrison Keiller’s real-life radio show as it revolves around a final broadcast and stage performance as the theater is about to become a parking lot. Yet, there is a lot of craziness that ensue thanks in part to an incredible ensemble cast as well as moments that are touching as well as being very funny. After all, it is a film about death and since it was Altman’s final film. At least he and the people at Keiller’s show would go out in style.

3. Me and Orson Welles 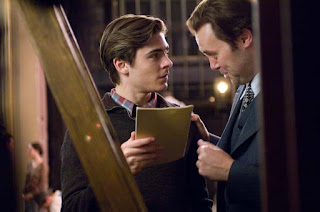 One of the most overlooked films of the last decade comes in what is truly a gem from Richard Linklater as it revolves around Orson Welles in his days as a playwright. Set in the late 1930s, the film is about a young man who meets Welles as he would work and eventually take a small part in Welles’ production of William Shakespeare’s Julius Caesar. The film takes place in the span of a week as it features Zac Efron as 17-year old high school student who is fascinated by Welles who is played with such charisma by Christian McKay. It is a tremendous film that explore what goes on in the theater as why rehearsals are important as it requires so much attention as Linklater definitely captures the spirit of Welles as an artist.

I picked The Last Metro, too! It really is a beautiful looking film, and the cast is fantastic. I like but don't love Prairie Home Companion - it never really comes together for me in the way Altman's best films do, but it is enjoyable. I haven't seen Me and Orson Welles but I've heard great things about Christian McKay's performance.

You got me on this one. I haven't seen any of these.

Some great catches. I don't adore The Last Metro as I do some Truffaut films but it was a fine film with superior work by Catherine Deneuve.

I'm with Daniel on Prairie Home Companion, it had some great parts-Lily Tomlin and Meryl Streep as sisters was a highlight but it didn't quite gel as some of his films do. Not painful but no classic.

I agree Me and Orson Welles is an overlooked gem mostly for Christian McKay's great performance. Efron was okay but still very callow, he needs to find some more films like this to at least mix in with the inane trash he's been pumping out lately if he hopes to have any sort of career longevity.

I reached back for my titles today but I highly recommend all of them especially the first.

The Velvet Touch (1948)-Stage star Valerie Stanton (Rosalind Russell) attempts to break ties with her longtime producer and paramour Gordon Dunning (Leon Ames) after the closing of her latest play so she can move on with her life and career but during an argument in his office she accidently kills him. Unobserved she leaves and as suspicion falls on Gordon’s former flame Marian Webster (Claire Trevor) the film looks back at how matters came to such a pass. Meanwhile jocular policeman and theatre buff Captain Danbury (Sydney Greenstreet) investigates. Nice stage atmosphere and excellent performances add much to this undeservedly obscure, efficiently made little drama with a twist of noir thrown in that has a great ending.

A Double Life (1947)-You’ve heard people jokingly tell others when they are getting carried away with something to “not get lost in the part!” but that’s just what happens in this noirish drama that won Ronald Colman a Best Actor Oscar. Anthony John (Colman) is a famed stage star greatly respected for his Shakespearian interpretations. The problem is that he lives the roles both onstage and off, when playing comedy he is the best guy in the world but when the material is dark so are his moods which among other things has led to the end of his marriage to his frequent costar Brita (Signe Hasso). Now he’s undertaken Othello and as he immerses himself deeply into the role his sanity begins to slip putting all around him including Brita and his mistress Pat (a young, whippet thin Shelley Winters) at risk.

42nd Street (1933) - Aspiring hoofer Peggy Sawyer (Ruby Keeler) is a greenhorn new to the Broadway stage where through a friendship with two other chorines, the brassy Lorraine (Una Merkel) and the loose “Anytime Annie” (Ginger Rogers) she gets a spot in the chorus of a new show “Pretty Lady”. Through huge contretemps the star of the show has to bow out and Peggy is plucked from the line and told by the producer Julian Marsh (Warner Baxter) “You’re going out there a nobody…but you’ve got to come back a STAR!” And she does with the help of mind bogglingly elaborate dance numbers staged by Busby Berkeley. Incredibly influential musical invented just about every cliché in the book.

I forgot about Prairie Home Companion, that was very good.

The only one I've seen here is A Prairie Home Companion and I really liked that one too.

Who doesn't love the stage? It lends itself so well to cinema,

I haven't seen any of your picks but have wanted to see Prairie Home for a long time. You have intrigued me with the movie with Orson Wells as a character...well, himself.