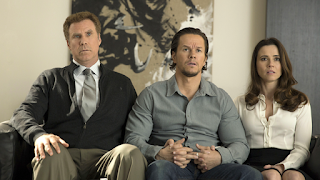 Directed by Sean Anders and screenplay by Anders, Brian Burns, and John Morris from a story by Burns, Daddy’s Home is the story of a mild-mannered man who finds himself having to compete for the attention of his step-children once their father appears to try and put himself into their relationship. The film is a comedy that pits father against stepfather all to try and see who can be the best father. Starring Will Ferrell, Mark Wahlberg, Linda Cardellini, Bobby Cannavale, Hannibal Burress, and Thomas Haden Church. Daddy’s Home is a funny and exciting film from Sean Anders.

The film is a simple story of a man who works as an executive at a smooth-jazz radio station as he had been a stepfather to a couple of kids for years as he is trying whatever he can to help them when that all changes when his wife’s former husband arrives for a visit and all hell breaks loose. What happens is that it becomes this kind of mental competition and one-upmanship between two men who both want to become the best father to these two kids. The film’s screenplay by Sean Anders, Brian Burns, and John Morris doesn’t just explore the two different men in this scenario in the mild-mannered and sensitive Brad Whitaker (Will Ferrell) and the more macho and adventurous Dusty Mayron (Mark Wahlberg) in how they deal with each other but also in their idea of raising kids. Watching all of this is Brad’s wife Sara (Linda Cardellini) who married Dusty many years ago but divorced due to his immaturity and lack of commitment to family as she isn’t sure if Dusty is really there for noble reasons. Even though Brad finds Dusty intimidating physically and mentally, Dusty would see what Brad can bring to the table as it would force him to raise his gain but also deal with the challenges in being a full-time father.

Sean Anders’ direction is very straightforward in terms of the compositions he creates as well as emphasizing on a few stylish moments in the film such as a skateboarding sequence with the usage of the GoPro camera. Still, Anders just goes for something simple as the film is shot mainly in and around New Orleans as it does have a few wide shots though Anders would favor medium shots and close-ups to focus on the characters and the comedic moments. Some of these moments involve Brad trying to upstage Dusty by doing crazy stunts only for it to go wrong as it does deliver. Anders would wisely know not to emphasize too much on gags in order to focus on Brad and Dusty to get an understanding on fatherhood as it would it add a common goal for these two men. Notably a scene where Brad and Dusty help the latter’s son Dylan (Owen Wilder Vaccaro) in dealing with a bully as well as wanting to dance with Dusty’s daughter Megan (Scarlett Estevez) for an upcoming father-daughter dance at her school shows that these two men do bring the best in each other. Overall, Anders creates a charming and hilarious film about a stepfather competing with a father for the affection of their children.

Cinematographer Julio Macat does excellent work with the film’s cinematography as it’s straightforward for many of the daytime exterior/interior scenes with some lights for the scenes at night. Editors Eric Kissack and Brad Wilhite do nice work with the editing as it has elements of style with some of the rhythmic cuts to play into the humor as well as some of the gags. Production designer Clayton Hartley, with set decorator Jan Pascale and Elliott Glick, does fantastic work with the look of the home that Brad and Sara live with the children as well as the look of the few places they go to. Costume designer Carol Ramsey does terrific work with the costumes as it is mostly casual from the sweater vest look of Brad to the more rugged look of Dusty.

Visual effects supervisor Paul Linden does very good work with some of the film’s visual effects as it relate to a few of the big gags in the film as it relates to Brad trying to one-up Dusty. Sound editors Andrew DeCristofaro and Michael Payne does superb work with the sound as it if straightforward to play into the atmosphere of some of the locations including a basketball arena and other locations for the activities Brad does with the kids. The film’s music by Michael Andrews is wonderful for its mixture of jazz and light-hearted orchestral music to play into the film’s humor while music supervisors Dave Jordan and Jojo Villanueva create a fun soundtrack that features an array of music from the Pixies, AC/DC, Metallica, the Hives, Jay-Z, the Offspring, the Commodores, T.I. with Rihanna, the Temptations, and Leo Sayer.

The casting by Allison Jones is great as it feature some notable small roles and appearances from Paul Scheer as a basketball radio DJ, Chris Henchy as a smooth jazz DJ, Hannibal Burress as a handyman named Griff who would be at the house due to befriending Dusty, and Bobby Cannavale in a funny performance as Dr. Emilio Fernandez as the famed fertility doctor who checks on Brad as he also knows Dusty. Owen Wilder Vacarro and Scarlett Estevez are fantastic in their respective roles as Dylan and Megan Mayron as two kids who aren’t fond of Brad as they’re excited to have their father around as they go to both of them for advice. Thomas Haden Church is excellent as Brad’s boss Leo Holt who gives Brad some bad advice as well as tell some hilarious stories of his own failures in the marriages he had been in.

Linda Cardellini is brilliant as Sara Whitaker as Brad’s wife/Dusty’s ex-wife who isn’t initially fond of having Dusty around though she realizes that he is trying to prove to be a good father while wanting to have another child despite the fact Brad might not be able to. Mark Wahlberg is incredible as Dusty Mayron as a rugged guy who does all sorts of things that makes him popular as he tries to do whatever he can to win back his children by playing mind games with Brad while dealing with his own faults as a father. Finally, there’s Will Ferrell in a marvelous as Brad Whitaker as a radio executive who is trying to win over Dylan and Megan as well as understanding them where he feels threatened by Dusty forcing to try all sorts of things where it’s a manic and wild performance from Ferrell.

Daddy’s Home is a remarkable film from Sean Anders that features great performances from Will Ferrell and Mark Wahlberg. Along with its supporting cast, engaging story, and some very funny moments, it’s a film that isn’t just enjoyable for families but also a comedy that is edgy but also sensible for children. In the end, Daddy’s Home is an amazing film from Sean Anders.

Didn't think this was great, but I did enjoy it better than I thought I would going in.

I wasn't crazy about this, the that part towards the end with the kids fighting at the dance is one of the funniest I've ever seen. I was rolling during that.

@Wendell-I wasn't sure about seeing it as I thought it was just going to be another run-of-the-mill kind of comedy but after reading that it's one of Sofia Coppola's favorite films of the 21st Century so far because it's a film she watches with her daughters. I had to check it out and it was better than I realized.

@Brittani-That shit was hilarious. The fact that it made me laugh throughout the film is what made it work and I think it's better than I thought it would be. I'm not sure if I'll see the sequel since they tend to be underwhelming.