For the first week of September 2017 as part of the Thursday Movie Picks series hosted by Wanderer of Wandering Through the Shelves. We venture into animated films but that are catered toward adults as animated films are often catered towards children but there have been films that are made specifically for a mature audience. Here are my three picks: 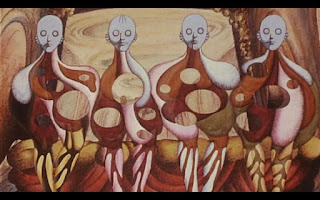 Based on the novel by Stefan Wul, this French sci-fi animated film revolves around tiny humanoids who are kept as pets and slaves by these large blue aliens leading to a revolt in a faraway planet. It’s a very strange yet entrancing film by Rene Laloux as it does have some political and social commentary yet it has a richness in its two-dimensional hand-drawn animation that is engaging to watch. Even as it has artwork that says a lot about what the universe could be and how aliens can mess it up for the humanoids who would rebel. 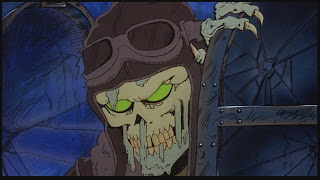 One of the finest cult films of the 1980s that would inspire a much-beloved episode of South Park, the animated film based on the fantasy-comic magazine is an anthology film of sorts with many different stories. All based on an orb that tells the story of the different journeys he took, many of the stories are racy and violent with some humor as it features a lot of the music of the many acts of the early 80s from Journey, Blondie, Cheap Trick, Black Sabbath, and many others. It’s definitely a fucking trip of a film but so fun to watch. 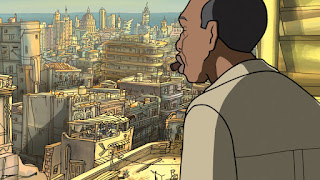 Set in the world of pre-Castro Cuba during the age of big bands and Cuban jazz, the film is the story of a piano player and singer who both fall in love and dream of making it big as they travel to America where they struggle to gain acceptance. It’s a film that is presented in hand-drawn animation to play into the look of the late 1940s and early 1950s as it also feature some nudity and violence to showcase a couple who love and inspire each other. The film isn’t just filled with rich animation but it has this incredible music soundtrack that really capture a period of the times as well as what makes Cuban music so sumptuous.

I'm amazed I've seen even one of these since I shy away from anything animated but I have seen Heavy Metal! I didn't love it nor did I hate it. Some decent music. I doubt that I'll seek out the other two though.

I struggled to come up with three this week. I came up with my first and then hit the wall. I thought of Fritz the Cat but it's filth and I never made it past the first ten minutes anyway so I watch my second two especially for this. Sadly I hated both but used them anyway to not feel I totally wasted my time on them.

Cool World (1992)-A prisoner Jack Deebs (Gabriel Byrne) has created a comic book universe from his cell and one day finds himself sucked into it where he discovered not only another trapped human Frank Harris (Brad Pitt) but his lascivious creation Holli Would (Kim Basinger) who tries to entice Jack by ANY means so that she can cross over to the human world and with her a Pandora’s Box of cartoon depravity. Ugly leering film of value only to see Pitt working his way up.

A Scanner Darkly (2006)-Stupid hodgepodge about an undercover cop trying to bust a drug cartel but coming under the influence of the drug he becomes a test subject himself…or something like that. The hook here is that the movie was filmed with actors (Keanu Reeves, Wynona Ryder and Woody Harrelson among them) and then retro scoped with animation. It wasn’t worth it, all concept and little entertainment.

Chico and Rita is a lovely film, really enjoyed it as well.

I loved Chico and Rita.

I haven't seen any of these and probably won't. The heavy metal one looks very unappealing to me actually.

I'm ashamed to have not seen any of these.
Your judgment is always so sound that I know I need to add these to the list.

I haven't seen any of these, but now I want to see them all.

I got to say the Heavy Metal movie looks intriguing, just from that image.

@joel65913-I've seen all 3 of your picks as I'm very fond of them. Especially A Scanner Darkly which I thought was very interesting.

Sonia Cerca-I'm glad someone else here likes it.

@Birgit-Heavy Metal is a film that's more appealing to those who like comics and heavy music of the early 1980s. If you're not into those things, then it's not for you.

@vinnieh-Oh it is. It's got major boobage, crazy-ass violence, and all sorts of fucked-up shit. I love it.