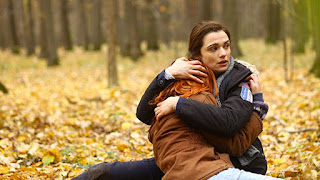 Directed by Larysa Kondracki and screenplay by Kondracki and Eilis Kirwan, The Whistleblower is the story of a United Nations peacekeeper who makes a chilling discovery as it relates to sex trafficking forcing her to confront the United Nations and eventually tell her story publicly. The film is based on a true story about Nebraskan police officer Kathryn Bolkovac who went to Bosnia and Herzegovina in 1999 originally to work for the UN’s peacekeeping work as her discovery would raise concerns over what is happening in the war-torn country as Bolkovac is played by Rachel Weisz. Also starring Monica Bellucci, David Strathairn, Nikolaj Lie Kaas, Benedict Cumberbatch, Liam Cunningham, Anna Anissimova, and Vanessa Redgrave. The Whistleblower is a terrifying yet gripping film from Larysa Kondracki.

Set in 1999 in the aftermath of the war in the Balkans at Bosnia and Herzegovina, a Nebraskan police officer in Kathryn Bolkovac signs up to join the peacekeeping mission for the United Nations in the hope of making some serious money to be near her daughter who is living with her father and his new family. When she is given a new assignment relating to the department of gender affairs, she would make a chilling discovery as it relates to sex trafficking that include those working for the United Nations. The film’s screenplay by Larysa Kondracki and Eilis Kirwan opens in Kiev, Ukraine where two young women make plans to make money and travel the world unaware that they’ve been sold to Bosnia and Herzegovina for prostitution as it then cuts to Bolkovac working in Lincoln, Nebraska as a cop awaiting a transfer to be near her daughter.

In taking this job for the United Nations to help out in post-war Bosnia and Herzegovina for financial reasons, Bolkovac would get the attention of the revered Madeleine Rees (Vanessa Redgrave), who is the head of the Human Rights Commission for the United Nations, after Bolkovac aided a Muslim woman over domestic violence charges and have something done about it. Bolkovac would see the job as a major opportunity until she participates in a raid at some nightclub where she makes a discovery that has her questioning what is happening as she sees men who work as part of the UN’s police force participating in these lewd events as she takes pictures and passports as evidence. She would confront those who work in that force but also have a realization of how big things are when she talks to women who had been taken from their homes for sex trafficking as well as try to help a couple of young prostitutes including a young Ukrainian girl in Raya (Roxana Condurache).

Yet, there are complications when there are those including local Bosnian police forces that want to keep it quiet prompting Bolkovac to turn to Rees for help who brings in internal affairs specialist Peter Ward (David Strathairn) for help. Even a human rights organization executive in Laura Leviani (Monica Bellucci) tries to help by talking directly to Raya’s mother despite the corporate pressures to not discuss what had been found. Still, it urges Bolkovac to find out more as the few allies she has do whatever they can to help her but there is so many obstacles for Bolkovac that would she would have to face all the way to top official at the United Nations.

Kondracki’s direction is very straightforward in terms of the compositions that she creates while much of the film is shot mainly near Bucharest, Romania as Bosnia and Herzegovina with some interior scenes of the UN buildings shot in Toronto. While there are some wide shots of the locations, Kondracki’s direction is mainly intimate to play into the suspense and drama while displaying an air of realism into the subject matter. Most notably a scene in which Raya has been captured and raped in front of other girls to see what would happen to her if she told anyone what they’re doing. It’s among one of the most horrifying scenes in the film as much of Kondracki’s direction emphasize on hand-held cameras that include a chase scene involving Bolkovac running after a young prostitute who had been taken and was found near the Serbian border.

While there is a lot of moments of suspense with some action, much of Kondracki’s direction emphasizes on the dramatic stakes of what Bolkovac wants to do as the drama would intensify once she is dealing with various officials in the United Nations as well as private contractors working with the government for their own interest. Especially when she’s asked to take a leave which she knew would only cause more problems prompting her to take action and gather whatever evidence she has that could expose everything. Even if it means having to lose her job and never see her daughter again as she is aware of what is at stake and what to do to make sure that young women wouldn’t have to be taken for sex trafficking ever again. Overall, Kondracki creates a gritty yet evocative film about a United Nations peacekeeper who discovers the practice of sex trafficking in post-war Bosnia and Herzegovina.

Cinematographer Kieran McGuigan does excellent work with the film’s cinematography to capture some of the dark yet colorful look of some of the interior scenes set at night in the clubs and sanctuary for some of the women who are hiding from criminals. Editor Julian Clarke does brilliant work with the editing in creating some unique rhythmic cuts to play into the suspense and some of the action while maintaining something straightforward for the dramatic moments in the film. Production designer Caroline Foellmer, with set decorator Andreea Popa and art director Vlad Vieru, does fantastic work with the look of the interior of the UN offices as well as the look of the nightclub where the young women are forced to work at.

Costume designer Gersha Phillips does nice work with the costumes as it is mainly straightforward with the exception of the skimpy clothing the young girls are forced to wear. Sound editors Mark Gingras and John Laing does superb work with the sound with the way some of array of sounds in various locations are presented as well as some of the quieter moments in the film. The film’s music by Mychael Dyanna music is terrific for its usage of low-key orchestral music to play into the drama and suspense while music supervisor David Hayman provide a mixture of traditional Eastern European music with some contemporary music of the late 90s.

The casting by Sara Jay and Jenny Lewis is great as it feature some notable small roles from David Hewlett and William Hope as a couple of UN peacekeeping officers involved in the sex trafficking, Stuart Graham as a top UN official who tries to dismiss Bolkovac from her investigation, Benedict Cumberbatch as a UN security officer that befriends Bolkovac, Paula Schramm as a young Ukrainian woman in Luba who would convince Raya to travel outside of the Ukraine only to realize what she’s done, Rayisa Kondracki as a young prostitute in Ikra who wanted to testify only to be taken and later saved by Bolkovac, Rosabell Laurenti Sellers as Bolkovac’s daughter Erin, Alexandru Potocean as a corrupt Bosnian officer, and Liam Cunningham in a superb performance as the head of the private security company Bill Haynes who wants to cover up all of these reports on sex trafficking.

Monica Bellucci is terrific as Laura Leviani as a human rights organization executive trying to help Bolkovac as well as Raya’s mother despite the corporate pressures from her superiors to not be involved. Roxana Condurache is excellent as Raya as a young woman who is convinced by a friend to travel only to endure abuse of the worst kind as a prostitute which includes a scene of her being raped in the most gruesome of ways. Anna Anissimova is fantastic as Raya’s mother Zoe as a woman who wonders where her daughter is as she travels to Bosnia to meet with Leviani as she would learn some awful truths about what happened as well as the people who put her daughter in this mess. Nikolaj Lie Kaas is brilliant as Jan as a Bosnian UN official who is one of Bolkovac’s few allies as he tries to help Raya and other girls only to deal with Bosnian criminals.

Vanessa Redgrave is amazing as Madeleine Rees as the famed human rights commission head for the United Nations who hires Bolkovac to help her in gender affairs as she would learn what is going on as she also becomes disgusted over the fact that the United Nations is involved with sex trafficking. David Strathairn is incredible as Pete Ward as an internal affairs specialist who would help Bolkovac in finding more evidence about sex trafficking as he would make some discoveries that would get him in trouble as he does whatever he can to give it to Bolkovac and expose it to the world. Finally, there’s Rachel Weisz in a magnificent performance as Kathryn Bolkovac as this cop from Nebraska who takes a job for the United Nations peacekeeping force only to get a better job with more money but also revelations about what she would discover in post-war Bosnia and Herzegovina prompting her to do something where Weisz has this air of humility and determination to do the right thing as well as displaying that anguish over what is happening to these girls as it’s one of her best performances.

The Whistleblower is a phenomenal film from Larysa Kondracki that features a tremendous performance from Rachel Weisz. Along with its strong ensemble cast, eerie visuals, and gripping take on a universal subject matter that is uneasy to deal with. It is definitely a suspense-drama that showcases some of the troubling aftermaths of war and what some will do to not just protect their image but also make money out of it forcing a woman to stop all of that for the good of the world. In the end, The Whistleblower is a sensational film from Larysa Kondracki.

I've heard some good things about this one. Looking forward to giving it a watch.

This is such a shocking film, it's such a shame it's so underseen. Weisz is excellent here I still remember that big scene where she snaps and asks people around them why they aren't doing anything about the horrific things around them

@Wendell-It's definitely worth a watch as it is a film people need to see more.

@Sati-That scene shows Weisz displaying that humanity that is often lacking in a lot of these dramas and it shows that even in places where the corrupt rule. There is still some good in the world that is willing to fight all of that.