For the fourth and final week of September 2017 as part of the Thursday Movie Picks series hosted by Wanderer of Wandering Through the Shelves. We venture into the world of TV that focuses on families. Shows that revolve around the family unit whether they’re dysfunctional or normal. Here are my three picks:

1. The Fresh Prince of Bel-Air

One of the finest TV shows of the 90s that would serve as a stepping stone for then-rapper Will Smith into superstardom is this show about a young man who is sent to the posh Bel-Air to live with his rich relatives after getting in trouble in West Philadelphia. While it is known for Smith to do some funny things, it is about a family who deal with social standings, racism, and all sorts of issues that are serious yet they all come together as a family. Still, the show should be known for one character who is cooler than Will. Carlton Banks. 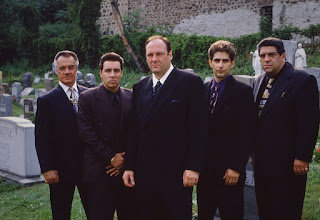 One of the greatest shows to ever emerge on television is a show about family. A mob family but with problems. Underneath all of that toughness and bravado, Tony Soprano is a man with problems as he goes to a shrink for help as he also deals with his own dysfunctional family as well as the people working for him in the mob. It’s also got all of these great characters and sometimes it’s sad to see them get whacked or moments that are shocking. It is a reason why people still love that show. 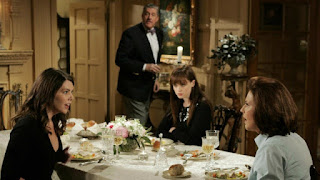 For about five-and-a-half seasons, this was one of the finest shows to emerge in the fledgling WB network as it’s about a woman who gave birth to a girl at age 16 and then fled her posh family life to raise her daughter alone as Lorelai and Rory Gilmore are friends first and mother/daughter second. Lorelai would reluctantly re-establish relationship with her parents for Rory to be given tuition to a prestigious prep school where in return, she and Rory would see them on Fridays for dinner. It’s a show that is fun as it explores life in a small town in New England with all sorts of hilarity, fast-talking dialogue, and pop culture references and then it kind of stumbled in the middle of the sixth season and faltered big time in the seventh as it relates to Lorelai’s love life. Then there’s the recent revival on Netflix that is ultimately one of the most disappointing revivals for a TV show.

Oh Carlton - he used to irritate me so much. I loved how ridiculous Hilary was though, so over the top.

Love Gimore Girls and I enjoyed the come back episodes but its not the same without dear Edward Herrmann.

The only one of the three I've seen any episodes of is Fresh Prince. I wasn't a regular enough viewer though to have a good fix on the show.

My mother and one of my nieces were HUGE Gilmore Girls fans but I could never get into it, probably because I kept walking into the middle of episodes and never could connect the characters.

We didn't have HBO when The Sopranos was on and afterwards it just seemed too onerous to try and catch up on the entire series but I know it was beloved and everyone I know who watched were slavish in their devotion.

The pickin's were so plentiful this week I chose to use the key theme word in the title as a way to winnow my picks.

Family (1976-1980)-Gentle family drama of the problems big and small of an upper middle class family, lawyer dad Doug Lawrence (James Broderick-Matthew’s father) wife Kate (Sada Thompson) and their three children Nancy (Meredith Baxter again), Willie (Gary Frank) and sensitive Letitia “Buddy” (Kristy McNicol), living in a small California town. Much of the power of the series came from its refusal to go for big showy emotions rather taking a naturalistic approach to the various issues that present themselves. Very well-acted.

All in the Family (1971-1979)-Archie Bunker (Carroll O’Connor), his wife Edith (Jean Stapleton) who Archie semi affectionately calls “Dingbat” their daughter Gloria (Sally Struthers) and her husband Mike Stivic (Rob Reiner) who Archie far less affectionately calls “Meathead” live together often disharmoniously in Queens, New York. Archie is a firmly opinionated bigot and his daughter and especially his son-in-law equally fierce liberals so their exchanges are often incendiary. When this debuted in ’71 it caused a revolution in how TV comedy was seen, to this point it had been dominated by shows similar to Father Knows Best and even more progressive ones such as Julia with Diahann Carroll dealt with gently humorous situations. But All in the Family took aim at the hot topics of the time in a more realistic way.

I never watched Fresh Prince nor The Gilmore Girls although I heard the latter was quite good but I did see The Sopranos. I don't have HBO but it appeared later on, on a different network and it was so good, dark, sinister, funny and you end up caring for the thugs

I've seen a few episodes of The Fresh Prince of Bel-Air and they were fun.

Fresh Prince! I liked that show a lot when I was a kid. The Soporanos is always one I'd like to watch, but I'm wary because I know how the series ends and that just doesn't seem very satisfying.

I loved Fresh Prince when I was younger. I'm certain I'd still enjoy it now.

I almost went with The Fresh Prince of Bel Air, myself. What a great show, that was. Love that you went with The Sopranos, too. I've got the whole series sitting here on a shelf, I need to finish watching the damn thing. Haven't seen even one minute of The Gilmore Girls, though.

@Katie-Hilary is so fun. I kinda wished the Revival didn't exist. I just didn't like the decisions of some of the characters and some of the storylines. It was so disappointing.

@joel65913-Family Ties sucked. What is it with white people and their lame music and idiotic Reaganomic values? It was bullshit.

@Birgit-I'm glad someone else here loves The Sopranos. I loved those guys. Especially Tony.

@Brittani-Actually, I like the ending now that I think about it because we never know what will happen to Tony or is it just paranoia.

@Wendell-With Gilmore Girls, just watch the first five-and-a-half seasons. Things got shaky during the second half of the sixth season while the seventh and final season was a mess due to the fact that the creators were out of the show due to a dispute with the networks. Avoid the Revival. It was shit for the most part except for Kelly Bishop lashing out at her rich friends and their bullshit.