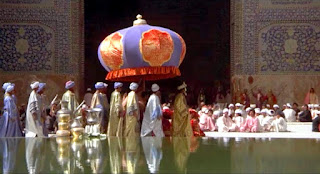 The film follows the life of a young man who buys a slave girl whom he falls for only to lose her by a series of circumstances that would lead to various stories set in an ancient Arabia. It’s a film that play into many ideas of love told through the idea of eroticism as it include the story of a man who falls for a mysterious woman on his wedding day as well a man meeting a woman trapped by a demon and a few others. The film’s screenplay by Pier Paolo Pasolini and Dacia Maraini is more structured in comparison to the previous films of Pasolini’s trilogy relating to ancient life as its main narrative revolves around this young man named Nur Ed Din (Franco Merli) who buys this young slave in Zumurrud (Ines Pellegrini) where it is love at first sight as the two hope to be together without any problems.

Unfortunately, richer men are upset that someone as poor as Nur was able to get her as they would take advantage of him and claim Zumurrud for their own reasons leading a series of misadventures when Nur tries to find her. Zumurrud meanwhile, would be handed from master to master until she would encounter something that would give her the freedom to be someone else through something completely accidental. Both would be told stories as their story is the basis for the first act including one about Zumurrud’s own story of how she became a slave. The rest of the film focuses on the stories that both Nur and Zumurrud would be told to as it relates to the ups and downs of love and eroticism around their surroundings.

Pasolini’s direction is definitely stylish for the way he portrays life in ancient Arabia as well as the world of sex in those times. Shot on various locations at the Eritrea deserts near Sudan and Ethiopia as well as locations in Yemen and Nepal, the film does play into this world that is quite unique from the opening scene where Zumurrud is being auctioned off but she refuses to be with older masters because of their shortcomings as she chooses to be with Nur because he’s young. Pasolini’s usage of the wide shots doesn’t just capture the beauty of the many different locations which is definitely rich in the landscape but also would create some carefully precise compositions as it relates to the world that some of the characters encounter whether it’s Zumurrud at some mysterious city where she’s mistaken for someone or characters at some mystical places that play into some kind of premonition. While there are some intimate compositions in the usage of close-ups and medium shots in the film, including some extreme close-ups of penises, for some of the film’s sexual content. The direction also has Pasolini provide some comical elements into the stories such as the man who falls in love with another woman on his wedding day where he is unaware of what will happen to him.

The direction also play into elements of fantasy and surrealism as it relates to much of the film’s second and third act into the stories that Nur and Zumurrud are learning about. One revolves around the idea of temptation and the fallacies of love in this man who was to marry his cousin who would later give him advice in how to win this mysterious woman as he would tell this story to another man. This man would take him to meet two other men who would endure some form adventures that are sexual but also play into elements of mystery and lore as Pasolini wants to create something that is extravagant with elements of symbolism. Notably the story of a man who would fulfill a prophecy unaware of his true role as it would return to the main narrative to showcase the challenges that Nur has to face including temptation and circumstances beyond his control. Still, it play into Pasolini's idea of eroticism as something that is more about emotions and what the heart wants rather than just an excuse to show skin. Overall, Pasolini creates an outrageous yet rapturous film about the world of eroticism in ancient Arabia.

Cinematographer Giuseppe Ruzzolini does amazing work with the film’s colorful and lush cinematography in capturing the beauty of the various locations including some of the oasis in the deserts and some of the places the characters go to. Editors Enzo Ocone, Nino Baragli, and Tatiana Casini Morigi do excellent work with the editing as it play into some of the film’s offbeat rhythms as well as its transitions and approach to humor. Art director Dante Ferretti does incredible work with many of the film’s interiors from an underground bunker to tents and other places the characters go to that show the richness of the times.

Costume designer Danil Donati does fantastic work with the costumes as it is very colorful in its look and feel as it show how lavish they were in those times as well as how the poor would look. The sound work of Luciano Welisch is superb for capturing the atmosphere of some of the different locations in the film as well as some of the chaos that loomed involving large crowds. The film’s music by Ennio Morricone is incredible for its diverse music score as it pay tribute to the world of Arabian music with its flutes and percussions while using some organs to play into the moments of suspense and drama as it’s one of the film’s major highlights.

The film’s terrific cast include some notable small roles from Alberto Argentino and Salvatore Sapienza as a couple of princes who would embark into a series of adventures, Abadit Ghidei as a mysterious princess, Margaret Clementi as Aziz’s mother, and Franco Citti in a superb performance as a mysterious demon one of the princes meets. Luigiana Rocchi is wonderful as this mysterious young woman that Aziz falls for due to her ravishing beauty while Tessa Bouche is fantastic as Aziz’s cousin Aziza whom he was supposed to marry as she would give him things to say to win over this mysterious woman. Ninetto Davoli is excellent as Aziz as this man who falls for a mysterious beauty on his wedding day who copes with his loyalty towards Aziza as well as what he wants. Ines Pelligrini is brilliant as Zumurrud as this slave girl who lets Nur become her master as she would eventually go into an adventure and later be part of a mysterious circumstance due to some weird misunderstanding. Finally, there’s Franco Merli in an amazing performance as Nur Ed Din as a young man who purchases a slave girl whom he falls for as he would endure a strange journey into trying to find her that would lead him into being told these odd yet compelling stories about love and eroticism.

You and I are both going hard on Blind Spots this month. I've got another coming out tomorrow. Haven't seen this one, myself. As a matter of fact, I haven't seen any of Pasolini's work. Thanks for making me aware of him.

@Wendell-Pasolini is an interesting figure though I've only covered the latter part of his career as it's considered his most controversial and confrontational as I'm not sure you'll get into it. Believe me, if you ever decide to see Salo. I shall warn you that you'll never want to see that film again if you're able to get watch it all the way as some aren't able to get past 20 minutes and they didn't even make it to the most obscene moments in the film.