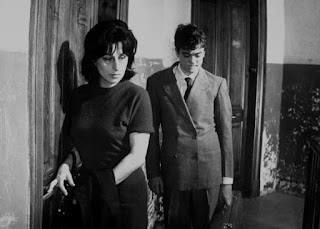 Written and directed by Pier Paolo Pasolini, Mamma Roma is the story of a former prostitute who is leaving the profession to open a food stand as she hopes to reconnect with her 16-year old son whom she abandoned when he was a baby only to be threatened by the presence of her former pimp. The film is an exploration of a woman trying to redeem herself as she deals with her troubled past and a world that her son might venture into. Starring Anna Magnani and Ettore Garofolo. Mamma Roma is an evocative and rapturous film from Pier Paolo Pasolini.

The film revolves around a former prostitute who lives in Southern Italy as she finds her 16-year old son as they move to Rome in the hopes of starting a new life by selling food at a food stand as well as ensure her son follows a good path. It’s a film that explores post-war life in Italy where a woman is embarking on a life of goodness and hoping for her son to make a fresh start and live a good life. Pier Paolo Pasolini’s screenplay emphasizes more on character study than structure as he follows the life of the titular protagonist (Anna Magnani) who is from a poor town as she finds her son Ettore (Ettore Garofolo) bumming around as she realizes that they need to move to Rome having moved past her previous life as a prostitute. In Rome, she is eager to sell food at the local market stand but also want her son to be part of a society that is problematic as he’s more intrigued by making quick money through stealing while also goes after a woman nearly a decade older than him in Bruna (Silvana Corsini).

Pasolini’s direction is definitely mesmerizing for the way he captures a moment in time where Italy seems to be thriving years after World War II but not everyone is prospering from these changes. Shot on location in areas in and near Rome, Pasolini’s direction uses the locations as characters in the film where there’s churches and a few of the city’s landmarks that lurk in the background in wide shots as it play into Mamma Roma’s desire to do good and redeem herself. The usage of the wide shots give Pasolini a lot of scope and coverage into the locations that include these long-gazing unbroken shots of scenes where Mama Romma walks with a fellow prostitute in Biancofiore (Luisa Loiano) as it would go on for minutes and be presented during the night. Pasolini’s direction also play into this air of symbolism that recalls famous paintings and images such as the film’s opening sequence where Mama Romma is at a wedding party as it recalls images of the Last Supper as well as a metaphorical image of what is happening with Italian society in the early 1960s for those who don’t live in Rome or aren’t in tune with the modern world.

Pasolini would use close-ups and medium shots that do play into the emotional elements of the film as it relates to Mama Romma’s relationship with Ettore as well as the presence of her former pimp Carmine (Franco Citti) whose wedding she attended as he appears in the third act wanting her back. It would play into this drama as it relates to the past and the relationship between Mama Romma and Ettore that is becoming troublesome as Ettore starts to resent her presence. Even as his attempts to be part of society would be short-lived where Pasolini play into this growing disconnect between the two. Especially with Ettore going into the world of small-time crime as a way to prove to himself that he doesn’t need his mother but is unaware of the dire consequences he faces with his mother watching from afar into his descent and the guilt that she would carry. Overall, Pasolini crafts an intoxicating yet harrowing film about a former prostitute’s attempt to renew her life with the son she abandoned as a baby many years ago.

Cinematographer Tonino Delli Colli does brilliant work with the film’s black-and-white cinematography with its usage of available light for the exterior scenes set at night as well as the natural setting for the scenes in the day as well as low-key lighting for some of the film’s interior scenes. Editor Nino Baragli does amazing work with the editing as its usage of rhythm cuts, stylish slow-motion bits, and straight cuts help play into the drama as well as some of the film’s emotionally-intense moments. Art director Flavio Mogherini and set decorator Massimo Tavazzi do fantastic work with the look of the apartment that Mamma Roma and Ettore live in as well as the room where the wedding dinner occurs in the film’s opening scene.

The sound work of Renato Cadueri and Leopoldo Rosi is superb for its natural approach to sound as well as how motorcycles sounded at the time as well as the atmosphere of the people at the parties and markets. Music coordinator Carlo Rustichelli creates a wonderful music soundtrack that features two classical pieces by Antonio Vivaldi that helps drive some of the film’s dramatic moments while the soundtrack also feature a song sung by Mamma Roma and an old pop music piece by Joselito that Ettore sells to a pawn shop owner.

The film’s excellent cast feature some notable small roles from Paolo Volponi as a priest Mamma Roma turns to for guidance, Luciano Gonini as a friend of Biancofiore in Zacaria, Luisa Loiano as Mama Romma’s prostitute friend Biancofiore who tries to sway Ettore from Bruna, Silvana Corsini as a young woman Ettore falls for in Bruna, and Franco Citti as Mamma Roma’s former pimp Carmine as a man trying to reinvent himself early in the film only to return to his old trade and wants Mamma Roma back. Ettore Garofolo is marvelous as Ettore as a sixteen-year old boy who is struggling to find his role in Rome as well as be part of society only to be lured into the world of small-time crime as he also tries to woo a woman older than him. Finally, there’s Anna Magnani in a phenomenal performance as the titular character as a woman with a lust for life as she is hoping to reconnect with her son whom she abandoned when he was a baby and make a fresh start as she would later deal with some of the trials and tribulations in her attempt to reinvent herself but also trying to steer her son into the right path as it is an iconic performance from Magnani.

Mamma Roma is a tremendous film from Pier Paolo Pasolini that features a sensational performance from Anna Magnani in the titular role. Along with its ensemble cast, gorgeous cinematography, eerie setting, and a somber music soundtrack, the film is definitely a provocative look into a life where a woman tries to start fresh and with her son who is seduced by a darker world. In the end, Mamma Roma is a spectacular film from Pier Paolo Pasolini.

Pasolini is a blind spot for me, where would you suggest I start?

@Chris-I've only seen 5 films of his so far but I'm not really sure where to start as I was going to watch another one but I've decided to hold it off for next year since the film I was watching is going to be available on Criterion DVD/Blu-Ray in February. I would probably say Mamma Roma is his most accessible film though I'm still unsure of where to start as he's new to me as well. I started with Salo but that's a film where you will have to be prepared to be disgusted.