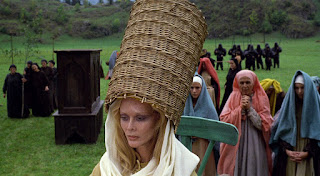 The film follows numerous people living in 14th Century Naples as it play into a period of time where everyone is dealing with themselves and the world around them as well as morals, ideas, tradition, decadence, and faith. It’s a film with different stories that tie characters in a few of them or in a standalone segment as they all deal with their situations while a master painter in Allivio di Giotto (Pier Paolo Pasolini) arrives in Naples during the film’s second half to create a mural. Pier Paolo Pasolini’s screenplay does kind of take an episodic approach to the narrative as it moves towards different stories which begins with someone murdering another man and then burying him only to move to an entirely different story. One of which involves a man who would encounter grave-robbers as well as be a victim of bad circumstances while another story involves a man who poses as a gardener at a convent where he pretends to be mute only to realize the job is extremely demanding.

It has a lot of humor as it relate to some of the stories told by Pasolini that include two young lovers going after each other, a trio of brothers trying to get rid of their sister’s lover, a woman who is cheating on her husband as she has her lover pretending to be someone buying her large jar, and two men making a pact about what happens in life after death. Some of it is approached with a sense of absurdity while there are moments that play into a world that is quite corrupt but in a very simple way to show how people can be tricked or seeking some form of redemption in a world that is troubled.

Pasolini’s direction is very stylish as it play into a period in time that was decadent and filled with this sense of immorality that was emerging but also a struggle over that immorality. Shot on various locations in Italy with a couple of segments shot and set in France, the film does play into this idea of an old world that was simpler and at least had characters who would try to trick someone but nothing that is too big. There are some gorgeous wide shots of the locations in around Italy including Naples in its countryside fields and mountains while Pasolini also create some precise framing in the medium and wide shots to play into certain ceremonies. The film also have close-ups as it relates to the character such as the young man from Sicily who arrives to Naples only to get into some trouble and then be part of another story involving grave-robbers. There’s an element of humor that is rampant throughout the film including the scenes involving the nuns at the convent in how they try to cope with their vow of chastity. The scene about the two young lovers is also filled with humor but Pasolini’s approach relating to the story of the sinful criminal wanting redemption and the brothers who want to kill their sister’s lover are the more serious.

There are also these moments that are symbolic in its approach to religious imagery such as the mural that di Giotto is trying to create including a dream he has as well as ceremonies relating to death. The sense of morality and immorality occurs very often in what Pasolini is trying to say in these stories as it showcases people struggling with what is right as the film’s final episode relating to this pact about the afterlife is filled with bits of humor. Yet, it also a film that also showcases people still trying to hang on to something while being conflicted with their actions in a land where faith still casts a shadow on the world. Overall, Pasolini crafts an evocative and compelling film about different stories of morality and immorality in 14th Century Naples.

Cinematographer Tonino Delli Colli does brilliant work with the film’s cinematography with its emphasis on natural lighting for many of the scenes in the daytime including some of its interiors while using low-key and natural shadows for some of the scenes set at night. Editors Enzo Ocone, Nino Baragli, and Tatiana Morigi do amazing work with the editing as it play into some offbeat rhythmic cutting as well as create some unique transitions from one segment to the next without any kind of anticipation where it also play into the humor and drama. Art director Dante Ferretti and set decorator Andrea Fantacci do excellent work with the look of some of the interiors in the castle as well as the big jar in one of the stories and the mural that di Giotto is trying to create.

Costume designer Danilo Donati does fantastic work with the costumes as it is very colorful and stylish to play into the period with the lavish look of some of the characters who are rich to the more ragged look of the poor. The sound work of Pierto Spadoi is terrific for its natural approach to the sound as it play into the different locations and set as well as how things are heard from afar. The film’s music is supervised by composer Ennio Morricone that mainly play into the music of the times with arrangements by Morricone as it include traditional folk and religious music as it’s one of the film’s highlights.

The film’s superb cast feature some notable performances from Vittorio Vittori as Don Gianni who tricks a poor couple, Angela Luce as a cheating wife in Peronella who created a big jar, and director Pier Paolo Pasolini as a pupil of Giotto who is trying to create a mural. The performances of Franco Citti as the murderer/thief Ciappelletto is fantastic to display the complexity of a man who has done bad things yet is trying to find redemption while Elisabetta Genovese is wonderful as Caterina as a young woman who wants to be with a young man that her parents might not approve of. Ninetto Davoli is excellent as Andreuccio of Perugia as a man who is put into strange situations involving a beautiful woman and later some grave-robbers as it showcases the troubles that an outsider endures. Vincenzo Amato is brilliant as Masetto of Lamporecchio as a man who gets work at a convent where he gets more than he bargains for.

Il Decameron is a phenomenal film from Pier Paolo Pasolini. Featuring gorgeous visuals, lively music, bawdy depictions of 14th Century life in Naples, and compelling stories about morality and conflicts of faith in those times. It’s a film that is quite complex and daring yet it is also told with a sense of humor to capture a period of time that was simpler. In the end, Il Decameron is a sensational film from Pier Paolo Pasolini.

Never heard of this one. To be honest, it sounds like a challenging watch. Seems like so much is going on.

@Wendell-I'm still new to Pasolini as this is the 2nd film of his that I've seen so far. Yet, I have 2 more films to go as it's part of a trilogy films that has Pasolini adapting three different known works as I'm doing the second one tomorrow. It is challenging but nonetheless intriguing.

I saw a semi remake of this (that's title changed about 50 times) with Mischa Barton and Hayden Christensen. I'm sure this one was far better.

@Brittani-Ah, I know what you're talking about. Virgin Territory. Yeah, that movie sucked as it was way too tame and tried to be like American Pie and other teen films. It was shit. As for this film, I don't know if you'll enjoy it since it's Pasolini as I'm aware that you hadn't seen all of Salo so it might be a little intense for you. Plus, the sexual content is way more intense than in Virgin Territory.