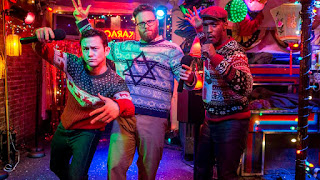 Directed by Jonathan Levine and screenplay by Levine, Evan Goldberg, Kyle Hunter, and Ariel Shaffir from a story by Levine, The Night Before is the story of three childhood friends who gather for a traditional Christmas Eve get-together as it might be the last one as two of the men are about to take on bigger steps into their lives. The film is a comedy about three guys who are about to embark on an annual event as they believe it’s the last one where a lot of hijinks and hilarity ensue. Starring Joseph Gordon-Levitt, Seth Rogen, Anthony Mackie, Lizzy Caplan, Jillian Bell, Mindy Kaling, Michael Shannon, and narration by Tracy Morgan. The Night Before is a witty and adventurous film from Jonathan Levine.

The film follow three lifelong friends who embark on an annual gathering as it is possible as it might be their last year together as one of them is a famous football player while one of them is becoming a father leaving the third man unsure of what he will do next. Then, a chance to be invited to an exclusive party makes this possible last get-together even bigger as the three men try to find the party but also deal with various issues in their lives. The film’s screenplay follows the live of these three men who begin this tradition in 2001 when the parents of Ethan Miller (Joseph Gordon-Levitt) were killed as his best friends in Isaac Greenberg (Seth Rogen) and Chris Roberts (Anthony Mackie) were around to be there for him as they would get drunk and high for a lot of years. 14 years later, things have changed with Isaac about to become a father and Chris is now a famous football player. Ethan unfortunately has failed in his attempt to be a successful musician while he works at a hotel with nowhere to go as Isaac and Chris are unsure what will happen to him next year as they have so much to do in their own lives.

This party known as the Nutcracker Ball is an exclusive party where only those with an invitation are invited as they have to call a number at a certain time for the secret location. Ethan, Isaac, and Chris would each embark their own paths to the party as well as have their own meetings with a mysterious drug dealer known as Mr. Green (Michael Shannon) who would give them a toke of his supply as it would lead to all sorts of hijinks. For Isaac, he would endure a bad drug trip due to the drugs his wife Betsy (Jillian Hall) had bought while Chris would have an encounter with a fan (Ilana Glazer) that goes horribly wrong. For Ethan, his encounter with his former girlfriend Diana (Lizzy Caplan) forces him to think about the decisions he’s made as well as the uncertainty of his own future since Isaac and Chris are about to embark on starting their own individual lives.

Jonathan Levine’s direction is very stylish as it is set during the Christmas holidays in New York City where the film is set and shot on location as it play into this sense of adventure that goes on throughout the film. While Levine would include some wide shots of the locations including a few landmarks such as the Christmas tree at the Rockefeller Center. Levine focuses more on intimate shots such as close-ups and medium shots to play into the drama and some of the humor as it also has elements of surrealism as it relates to Isaac’s own drug trip. There are also these moments where Levine takes a break from the comedy and drama as it play into the story as well as the adventures the individual characters would go to. The film’s climax at the Nutcracker Ball is definitely wild but also play into the kind of people Ethan, Isaac, and Chris want to hang out with only to realize how much they all needed each other. Overall, Levine creates a fun and lively film about three guys gathering for one last get-together to an exclusive party before they embark into the world of adulthood.

Visual effects supervisor Jeff Campbell does fantastic work with some of the things that Isaac sees during his drug-induced trip as well as a few things to play into the comedy. Sound editor Michael Babcock does superb work with the sound as it play into the atmosphere of some of the places the characters go to including the Nutcracker Ball. The film’s music by Marco Beltrami and Miles Hankin is wonderful for its mixture of holiday-inspired music with some hip-hop, rock, and electronic music to provide a different mood for various scenes in the film while music supervisor Gabe Hilfer provides a fun mix of holiday-based music with some non-holiday music from Run-DMC, Miley Cyrus, Kanye West, and Britney Spears.

The casting by Henry Russell Bergstein, Kathy Driscoll, Allison Estrin, and Francine Maisler is great as it feature some notable small roles from Miley Cyrus as herself, Aaron Hill as Chris’ teammate Tommy Owens, Helene Yorke as Betsy’s friend Cindy, Randall Park as Ethan’s boss, Jason Mantzoukas and Jason Jones as a couple of Santa Claus who get drunk and give Ethan some shit, Nathan Fielder as Chris’ driver, and Lorraine Toussaint as Chris’ mother who is wondering about what Chris is doing as she knows something isn’t right. Jillian Bell is fantastic as Isaac’s wife Betsy who is aware of her husband’s need to party but also worries about what he’s really feeling about becoming a father. Mindy Kaling is superb as Diana’s friend Sarah whom Isaac converses with as she is hoping to meet a guy named James where Isaac accidentally gets her phone. Ilana Glazer is excellent as Rebecca as a mysterious woman who is a fan of Chris as she is this mysterious individual who spouts a lot of film and holiday references as someone that wants to teach Chris a lesson. Lizzy Caplan is brilliant as Diana as Ethan’s ex-girlfriend who hasn’t seen him in months as she deals with Ethan’s shortcomings and the reasons they broke up.

Michael Shannon is incredible as Mr. Green as a mysterious drug dealer who gives the film’s protagonists a toke of his special weed as it is this very low-key yet charismatic performance from Shannon who is just a joy to watch. Anthony Mackie is amazing as Chris Roberts as a famous football player who is becoming extremely famous and about to have the season of his career where he is carrying a secret as well as dealing with the expectations that he has as a famous player. Seth Rogen is remarkable as Isaac Greenberg as a man who is about to become a father as he tries to deny his feelings by going on a drug-induced trip where he sees some strange things as it play into his own anxieties. Finally, there’s Joseph Gordon-Levitt in a marvelous performance as Ethan Miller as a failed musician with no idea of what he’s going to do next as he hopes this chance to be at the Nutcracker Ball would give him some answers as he is also forced to face his own faults as a man who is afraid to take a big step into adulthood.

The Night Before is a remarkable film from Jonathan Levine. Featuring a great cast, some hilarious moments, and some compelling themes on adulthood, it’s a film that manages to provide a nice balance of stoner humor in a Christmas setting as it play into the idea of family and friendship. In the end, The Night Before is a marvelous film from Jonathan Levine.

I liked this. The three leads looked like they had fun together and Michael Shannon was hilarious.

This movie is priceless. Michael Shannon is a highlight. You're right, he's so low key and charismatic in this. "You and I both know Miley was flawless."

@Brittani-It is a fun film and I enjoyed Michael Shannon in this as I could watch him be a dealer in a feature-length film.

@Alex-Michael Shannon could read a phone book and I would watch that. My first memory of him was being the driver Petey in Cecil B. Demented as he was just a joy to watch as it was him and Maggie Gyllenhaal that really stood out with Shannon wanting some gay love while Gyllenhaal is just this kooky Satanist. I need to watch that film again.