For the third week of December 2017 as part of the Thursday Movie Picks series hosted by Wanderer of Wandering Through the Shelves. We go into films that are about to come out in 2018 as a new year is approach as there’s so many to choose from as I’ve made a private list in my Letterboxd account as I’m unsure about making a full list of the Most Anticipated Films of 2018. Here are my 3 picks: 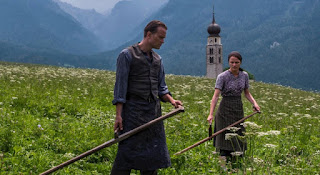 While opinion about his recent films following the release of 2011’s The Tree of Life have been polarizing, there is no question that Terrence Malick remains one of American cinema’s most enduring figures. Having made films that were largely improvisational and without a script, his tenth feature will be a return to a more traditional narrative as it is about the life of Franz Jagerstatter who was a conscientious objector in late 1930s Austria who refused to fight for the Nazis. August Diehl will play Jagerstatter as the film will also feature Michael Nyqvist in one of his final performances as it is likely to be something unconventional which is expected from a master like Malick.

2. The House That Jack Built

It’s been nearly five years since Lars von Trier has made a new film having completed a trilogy of films centering on the subject of depression. His next film is definitely going to be controversial as it was originally meant for television as it’s a psychological horror thriller told in the span of twelve years during the 1970s and 1980s about a serial killer. Starring Matt Dillon, Uma Thurman, and Bruno Ganz, the film will likely feature a lot of the elements von Trier is known for in shock value and discussions about anything as cinema’s enfant terrible might have more tricks up his sleeve.

3. The Man Who Killed Don Quixote 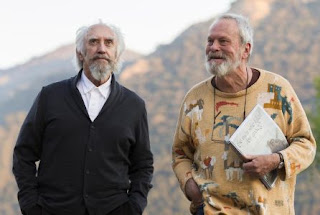 From Terry Gilliam comes the long-awaited film that began in the late 1990s in a troubled production that starred the late Jean Rochefort as Don Quixote with Johnny Depp as an accountant mistaken for Sancho Panza as it would become the 2003 documentary Lost in La Mancha. After several more attempts, the film is nearly in completion with Jonathan Pryce in the role of Quixote and Adam Driver as the accountant Toby which revolves around the latter who is transported back in time where he meets Don Quixote where they go into an adventure. With Olga Kurylenko in the female lead and a supporting cast that includes Rossy de Palma and Stellan Skarsgard, it’s a film that is likely to be an offbeat take on Miguel de Cervantes’ famed hero as well as the possibility that it might give that character the film he truly deserved after so many failed attempts by other filmmakers including Orson Welles and a horrible musical version by Arthur Hiller starring Peter O’Toole as Quixote.

The first two don't sound like my cup of tea but the Don Quixote film is one that has had such a checkered history it seems almost like it has to be seen. As much as I love Peter O'Toole I'm in complete agreement that Man of La Mancha was a stinker.

I haven't kept tabs on what's coming as closely as I should but these three have caught my eye.

Oceans 8-Femimine reworking of the fun Brad Pitt/George Clooney heist flick Oceans 11 (though why they couldn’t find 3 more famous women to make up the original number is troubling) itself a reworking of the Rat Pack original. As long as it keeps that sense of humor this should be a jolly time at the movies with hopefully a smooth tie-in of Matt Damon’s character from the other film.

Mary Poppins Returns-The magical nanny returns to help the children of the now grown children she cared for in the original classic. Apparently great care has been taken to protect the memory of the first with an amazing cast, including in some capacity Dick Van Dyke & Angela Lansbury (yeah). It will be tough to capture the special whimsy of the first but it will be interesting to see the attempt.

Bombshell: The Hedy Lamarr Story-In festival showing this documentary about the legendary movie star beauty who was sharp as a whip and an avid inventor (responsible for much of the basis of what is modern day internet technology) but whom was not taken seriously because of that same ravishing exterior has been acclaimed. She considered her beauty a cage from which she couldn’t escape and when faced with narrow minded comments about the improbability that a woman who looked as she did could also have a strong mind she replied “If I am a ‘new Hedy’ as some say, it is because they are seeing me as I really am, not looking at the outside of me.” Scheduled for a theatrical release early in 2018 this sounds fascinating.

Of these, Terry Gilliam's film is probably the one I would be most likely to check out. I'm not a fan of the other two directors.

Great picks! The House That Jack Built does look like a must-see, especially for those interested in daring, controversial cinema.

I'm pleased to hear Malick is returning to a more traditional narrative with Radegund. I felt he needed a change from his current style, which I liked, but was beginning to tire of.

I'll probably check out your last two picks, but probably won't check out the Malick film. I'm one of the ones that just can't get into his work.

I'll definitely check out The House That Jack Built and probably The Man Who Killed Don Quixote too but I'll skip Malick's.

I have always had trouble with getting into Gilliam's films, but I have never seen any of his stuff from the 80s, where I know he did his best stuff. I'm totally into seeing Malick get back to actual narrative storytelling. All in on that one.

I have been so busy with Christmas that my blogging took a back seat. I’m trying to get back into it. To be honest, I don’t think I will see the first one unless I hear nothing but raves because the Austrians were quite welcoming of Hitler and are not the innocents that are made out to be. There were people who did not want to be part of it, others who kept quiet and many who welcomed this evil just like the actual Germans. I love Terry Gilliam so this one will be on my radar.

@joel65913-If you're not familiar w/ Malick or von Trier then I doubt you'd want to see those 2 films. Ocean's 8 is something I'm interesting in seeing if it's good and I would like to see Mary Poppins Returns just to see what Emily Blunt is doing. The Hedy Lamar doc is interesting though it's technically a 2017 film.

@Brittani-It's good to know that you like Terry Gilliam.

@Chris-I'm glad you like my picks as I also read that Malick has gotten tired of the approach he did with recent films as I think going for something more traditional might be a return to form for his casual fans.

@Wendell-Unless you're into Malick's earlier films like Badlands and Days of Heaven, Radegund is something you might be into. The other 2 films are something I'm sure you'll see if you know anything about von Trier and Gilliam.

@Sonia Cerca-The House That Jack Built is the film I hope will be good as Nymphomaniac was kind of a let-down in its second half.

@Kevin-Gilliam's 80s work is a must and you need to see those now. With Malick, I'll go on board for anything he does.