For the first week of December 2017 as part of the Thursday Movie Picks series hosted by Wanderer of Wandering Through the Shelves. We venture into the idea of the ugly duckling where a person who often starts out as unattractive or insecure then becomes someone beautiful or become a better person. Yet, it’s a subject that has taken many forms and here are my three picks:

In this adaptation of George Bernard Shaw’s Pygmalion comes one of the finest musicals ever made in which an arrogant phonetics professor makes a wager in which he turns a Cockney flower girl into a presentable woman in Edwardian-era Britain. Featuring iconic performances from Audrey Hepburn and Rex Harrison, it’s a film told with such beauty and style by George Cukor with amazing songs in which Hepburn’s Eliza Doolittle is being this poor flower girl into a woman of glamour and manners only to realize why she’s been transformed. It is a film that still holds up and is always a joy to watch.

From Baz Luhrmann comes one of the finest feature-film debuts of the 1990s as it is set in the world of ballroom dancing where a promising dancer has become bored with the dancing he’s done and wants to do something different. He teams up with this young woman who is a beginner and isn’t very attractive yet she does give him some inspiration once she did some Flamenco steps. By helping her become more confident in her looks as she would help him find do something different and new where they also dare to shake up the establishment of the ballroom dancing committee as it’s all about dancing.

3. The Shape of Things 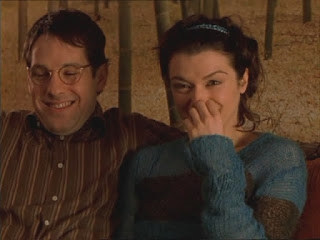 From Neil LaBute comes a cinematic version of his play as it is inspired by Pygmalion but it’s a really fucked-up film. It’s about this nerd, played by Paul Rudd, who meets this beautiful art student in Rachel Weisz who takes an interest him where she gets him to lose weight, take on a new look, and all sorts of things unaware of what it’s all about. Even as his friends in Gretchen Mol and Fred Weller become unsure of this change as they become alienated which would affect their own relationship. The film’s third act is really one of the most castrating moments in film as it is a twist on the ugly duckling theme that includes a devastating ending with all of the music is from Elvis Costello.

I quite like Strictly Ballroom despite the cheesy factor. I think I've only sat through My Fair Lady one...it rather annoyed me. Haven't seen The Shape of Things but judging by the trailer I can see where it goes.

Good choices. I only have a vague memory of The Shape of Things but do recall it being a decent film. Strictly Ballroom is another that I watched a while ago but it pulled me in and it fits well. We match in a roundabout way on My Fair Lady since I chose the original film as one of mine. The musical is a sumptuous treat for the eyes with wonderful performances, though I grieve that Julie Andrews wasn't able to recreate her stage role.

Aside from the original my other two choices are films that I return to often.

Now, Voyager (1942)-Old maid Charlotte Vale (Bette Davis) is a member of an extremely wealthy Boston family whose spirit has been crushed by her gorgon of a mother (a truly hateful Gladys Cooper) until during a visit to their home by kindly psychiatrist Dr. Jaquith (Claude Rains) Charlotte suffers a nervous breakdown and he whisks her away to his retreat for rich nutcases “Cascade”. While there she begins to rebuild her long suppressed confidence and emerges a beautiful swan on a cruise to South America. On the trip she meets the dashing but lonely Jerry Durrance (Paul Henreid) who is trapped in a bad marriage and falls for him. But there’s plenty of bumpy road ahead for this pair and those in their sphere all executed in top flight fashion in amazing clothes set to a swooningly romantic soundtrack. A gigantic hit in its day this was the most profitable picture of Davis’s career. The ne plus ultra of Ugly Duckling movies!

Miss Congeniality (2000)-To put it mildly FBI agent Gracie Hart (Sandra Bullock) is rough around the edges, she eats with her hands, chews with her mouth open and her idea of fashion is what’s clean that day, but having just blown a big case she finds she can’t refuse when she is recruited to go undercover as a contestant in the Miss United States beauty pageant when a threat is received. Despite many people’s doubt including pageant show runner Kathy Morningside (Candice Bergen) and the coach hired to smooth her feathers Victor Melling (Michael Caine) as well as her own obstinacy Gracie is pulled, pummeled and plucked into a beauty. While working the case she even learns to lighten up and appreciate a different outlook. Breezy comedy is a perfect fit for Sandra Bullock.

Pygmalion (1938)-First filming of the George Bernard Shaw play where a snobbish linguist bets a crony that he can transform a common flower peddler into a great lady by teaching her proper speech. Not as grandiloquent as My Fair Lady but both Leslie Howard as Professor Henry Higgins and Wendy Hiller as Eliza Doolittle create memorable characters. Wendy is actually more successful with her Eliza than Audrey Hepburn would later be since despite her innate dignity she makes a believable guttersnipe in the initial segment of the movie.

My Fair Lady is a perfect choice but I can’t help but wished Julie Andrews was given the role she originated on Broadway. I chose the original, Pygmalion. I love Strictly Ballroom and surprised how often is was chosen. I haven’t seen t(e last film and not sure I wa;t to.

I love a good ugly duckling transformation. I love seeing someone blossom into who they are meant to be.

I have not seen My Fair Lady in such a long time, I'm forgetting it's a musical.

@Katie Hogan-Actually, if you're aware of Neil LaBute's early. You might have an idea of where he goes but the reality is that it's really unexpected and soul-crushing.

@joel65913-It's been a very long time since I've seen Pygmalion though I prefer My Fair Lady. Miss Congeniality is a film that is just a joy to watch. Especially for Sir Michael Caine teaching Sandra Bullock how to.... glide. Yes, it's all in the buttocks.

@Birgit-I doubt you want to see The Shape of Things if you have seen the early films of Neil Labute.

@vinnieh-True although some of my choices are a little bit more abstract.