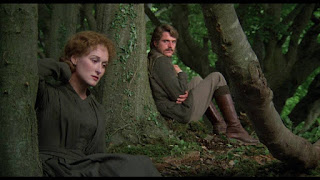 Based on the novel by John Fowles, The French Lieutenant’s Woman is the story of a Victorian-era gentleman who falls for a social outcast during the 19th Century while two actors playing the characters in a production of the film fall in love with each other. Directed by Karel Reisz and screenplay by Harold Pinter, the film is an unusual drama that mixes the period film with postmodern aesthetics to play into two cross-cutting narratives that blur reality and fantasy. Starring Meryl Streep, Jeremy Irons, Hilton McRae, Emily Morgan, Peter Vaughan, Leo McKern, Richard Griffiths, and Penelope Wilton. The French Lieutenant’s Woman is a ravishing and evocative film from Karel Weisz.

The film follows the love affair between a Victoria-era gentleman in Britain and a social outcast that is considered forbidden as the former is engaged to the daughter of a revered gentleman. At the same time, the story parallels with two actors taking part in a film production of the story that is being told as they’re having their own affair. Harold Pinter’s screenplay provides a cross-cutting narrative of sorts as the bulk of the film is about the story between the paleontologist Charles Smithson (Jeremy Irons) and this mysterious woman in Sarah Woodruff (Meryl Streep) whom he meets as she is standing on a pier during a windy and rainy day. Their relationship is one of intrigue from Smithson’s point of view as he is wondering about her story and why she is considered an outcast. Even as Smithson is reminding himself that he has an obligation to marry Ernestina (Lynsey Baxter) but remains entranced by Woodruff’s presence who often looks out at the sea as it relates to her sense of loss and longing as she had an affair with a married French officer.

Pinter’s script would also have this paralleling storyline in which the actors playing the characters of Smithson in Mike (Jeremy Irons) and Woodruff in the American actress Anna (Meryl Streep) who both begin an affair during the production as they try to figure out the story and characters they’re playing. Yet, their relationship has some complications as both of them are married to other people with Mike wanting to pursue Anna similar to what Smithson is doing in his pursuit towards Woodruff. Still, there is something about Woodruff that is compelling as she is a person that is anguished in her longing as it would often lead to episodes of madness which would drive Smithson into making impulsive decisions into his obsession for Woodruff.

Karel Reisz’s direction is quite exquisite for the way he would mirror certain locations of what it looked like in the 19th Century and what it would look like in the late 20th Century. Shot on various locations in Britain such as Lake Windermere, Exeter, Lyme Regis, the docks of London, and sets at the Twickenham Studios in Britain. The film does play into a world where many of the ideas of obsession and desire haven’t changed where Reisz would be in a certain location where the main story is taking place and then transport it to where the story is being told by the actors as they’re making the film. The approach to the compositions as well as trying to match it whether it’s in a wide or medium shot allows this line of fantasy and reality to emerge though the actors playing these characters are unaware of their relationship starting to mirror the way Smithson and Woodruff happens. Reisz’s close-ups would play into the growing relationship between the two couples in the film while he would create these exquisite wide shots to play into Woodruff’s sense of longing including this opening shot of Anna as Woodruff walking into the pier where Smithson would first meet her.

Reisz’s direction would also infuse elements of melodrama in some aspects of the main story as it relates to Smithson’s own search for Woodruff when she’s been sent away as he turns to others for help as they’re reluctant to knowing it would hurt his social status. Reisz would use some long shots to play into some of the monologues that happens including one in the forest where Woodruff reveals her affair with the French officer and how it ruined her to the point that she would turn into an outcast. The film’s third act would play into the pursuits of Smithson/Mike towards Woodruff/Anna with the latter in Anna attending a gathering held by Mike where it adds some confusion about what she wants to do in her relationship with Mike. Even as they’re about to film the ending as it is revealed that the book had multiple endings. One of which Reisz would make the choice as it add into the journey of these two couples with two different outcomes that blur reality and fiction. Overall, Reisz creates a riveting and enchanting film about a man pursuing an outcast in Victorian-era Britain with its players falling for each other.

Cinematographer Freddie Francis does incredible work with the film’s cinematography with its low-key yet naturalistic look for many of the daytime exterior scenes in the forests as well as the usage of available lighting for scenes at night while the 20th Century scenes is presented with bits of style in its usage of artificial lighting. Editor John Bloom does excellent work with the editing with its stylish transitions in some match cutting of locations in its different time periods as well as some rhythmic cuts to play into the drama. Production designer Assheton Gordon, with set decorator Ann Mollo plus art directors Allan Cameron, Norman Dorme, and Terry Pritchard, does brilliant work with the look of the sets of the 19th Century scenes from the rooms and offices where Smithson goes to as well as the hotel room that Mike and Anna stay at.

Costume designer Tom Rand does fantastic work with the period costumes of the 19th Century scenes as it play into the look and mood of the characters while going for something more casual for the scenes with Mike and Anna. Sound editor Don Sharpe does superb work with the sound in creating some natural textures in some of the locations as well as capturing some of the chaos in the some of the locations. The film’s music by Carl Davis is wonderful for its somber orchestral score that play into the drama as well as in some of the romantic scenes while the soundtrack include a couple of pieces by Johann Sebastian Bach and Wolfgang Amadeus Mozart.

The casting by Patsy Pollock is marvelous as it feature some notable small roles from Penelope Wilton as Mike’s wife Sonia, Peter Vaughan as Ernestina’s father, Richard Griffiths as a young nobleman Smithson gets drunk with, Emily Morgan as a young maid named Mary, Hilton McRae as Smithson’s assistant Sam, Lynsey Baxter as Smithson’s fiancée Ernestina, Charlotte Mitchell as an old woman Woodruff works for, and Leo McKern in a superb performance as Smithson’s mentor Dr. Grogan who helps Smithson trying to decide what is right. Finally, there’s the duo of Jeremy Irons and Meryl Streep in phenomenal performances in their respective dual roles of Charles Smithson/Mike and Sarah Woodruff/Anna. Irons provides a determination as well as a sensitivity in his approach to Smithson who would eventually become obsessed while is more calm but troubled as Mike. Streep has this air of radiance in her approach as Woodruff as a woman filled with a lot of anguish and torment to express her madness while is a bit more aloof yet witty as Anna.

The French Lieutenant’s Woman is a sensational film from Karel Reisz that features great performances from Meryl Streep and Jeremy Irons. Along with Harold Pinter’s inventive script, gorgeous visuals, and a sumptuous score, the film is truly an offbeat yet rapturous film that explores relationships and the pursuit of that in different time periods with two couples taking on paralleling journeys. In the end, The French Lieutenant’s Woman is an incredible film from Karel Reisz.

This looks like a fascinating movie starring two amazing actors.

@vinnieh-Indeed it is. It's really worth seeking out.

One of my favorite older film discoveries of 2017. Better than I expected. Streep in this story is a bit of a mystery and you can understand Irons' character wants to know more. Has she ever done a bad performance?

@Chris-Based on what I've seen her in. I can't think of a bad performance. I'm still waiting for her to be in an action movie franchise or a low-brow comedy.