For the sixth week of 2018 as part of Wandering Through the Shelves' Thursday Movie Picks series hosted by Wanderer. We venture into the world of romance in time for Valentine’s Day. Yet, romance can display moments of cheesiness, joy, or just some fucked-up moments that play into the idea of love. Here are my three picks as they’re all based on the sub-genre known as New French Extremity. Why did I pick these three films? It’s because I’m a sick motherfucker. 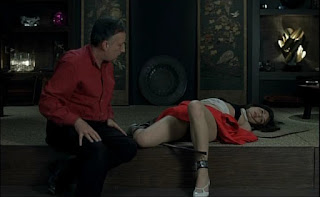 From Catherine Breillat comes a film is about the search for romantic companionship from the eyes of a young teacher who feels ignored by her boyfriend. Yet, it’s a character study that explores a woman’s desire for sexual satisfaction and later romance where she engages in an affair with her headmaster and a man she meets in a bar. It’s a very confrontational film that doesn’t shy away from explicit sex while the sadomasochism film is more emotional and dangerous than what is usually expected in mainstream films. 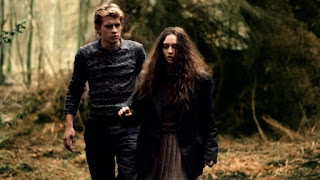 In this loose adaptation of Herman Melville’s Pierre: or, the Ambiguities comes one of Leos Carax’s controversial films as it plays into a novelist whose engagement to another woman is shattered when he learns that he has a long-lost sister whom he would engage into an incestuous affair. It’s a film that is really fucked up but still has these entrancing images as well as elements of surrealism that includes a couple having sex in a river of blood. 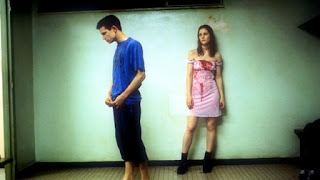 From Francois Ozon comes one of the filmmaker’s early films that was part of New French Extremity movement as it’s described as best as Hansel & Gretel meets Natural Born Killers. It’s a film about two young lovers who kill a classmate as they go on the run only to be captured by a woodsman who has a thing for the young man. It’s an odd film but certainly a lot of fun as it play into the twisted ideas of romance.

Well that's some theme within the theme especially considering the main theme. I haven't seen any of these and the first two definitely don't sound like my kind of movie but I've heard of the third and I've liked other Ozon films so I think I'll give it a go.

I went a kinder, gentler route myself with movies about romances that had a rocky road.

Waterloo Bridge (1940)-A distinguished officer walks slowly across London’s Waterloo Bridge one evening during WWII pulling a talisman out of his pocket he falls into a reverie of his great lost love. On that same bridge in WWI then young soldier Roy Cronin (Robert Taylor) meets ballerina Myra Lester (Vivien Leigh-fresh off GWTW) when they are forced into a shelter during a bombing raid. Falling almost immediately in love they plan to marry but Roy is called to duty before they can and Myra pledges to wait for him. Having stayed out with him beyond curfew she is dismissed from the ballet and when Roy is reported killed in action full of hopelessness she falls into a life of degradation. On the stroll a year later in Waterloo Station Myra meets Roy, recently released as a prisoner of war and he whisks her off to his family estate in Scotland but is it too late for the pair? Beautifully directed by George Cukor, tragic and heart wrenching romance was the personal favorite of both Vivien Leigh and Robert Taylor of their respective filmographies.

The President’s Lady (1953)-In 1789 newly appointed Tennessee Attorney General Andrew Jackson (Charlton Heston) seeking living quarters at the farm of the Widow Donelson (Fay Bainter) meets her daughter Rachel Robards (Susan Hayward) recently separated from her abusive husband Lewis. They strike up a friendship and after an abortive attempt by Rachel to repair her marriage fall in love. Word soon arrives that Lewis has divorced her and the pair marry. Two years hence they discover that Lewis never finalized the papers and their union is bigamist, he is now suing on the grounds of adultery however. Truly free they remarry but scandal plagues them for the rest of their days as Andrew rises higher and higher in politics towards the presidency but their love remains strong. Tender romance with a very strong central performance by Susan Hayward looks at the mores of an earlier time and shows that mudslinging and the damage it causes are nothing new.

Love with the Proper Stranger (1963)-Young naïve Angie Rossini (Natalie Wood) finds herself in quite a predicament after letting her guard down once and having a one night stand with feckless musician Rocky Papasano (Steve McQueen)….she’s pregnant. Seeking Rocky out she finds he at first doesn’t remember her but he steps up to help with the situation and despite interference from her very Italian family, his former showgirl squeeze and Rocky’s fears an attraction slowly blooms but there are bumps ahead before romance triumphs. Two movie stars at their peaks make this both gritty and swoony at the same time.

I haven't seen any of these, but they all sound very interesting from the way you describe them. Not sure about the siblings having sex in a river of blood though. lol

I've heard of Catherine Breillat's Romance but not seen it. I actually really want to see all of your picks - they sound fascinating

Wow. Haven't heard of any of these, or New French Extremity for that matter. They definitely sound...interesting.

Haven’t seen those selections, though I have watched other films by Carax and Ozon.

All three sound slightly twisted and outside the mainstream which is intriguing. Good job promoting the little seen works which is what blogs can do!

I can say I haven’t seen any of these films and probably won’t but I applaud your theme within a theme. It is original and well thought out and fun to read.

I have seen Romance a while back and oddly I watched it after I saw The Piano Teacher and I think both films are similar in a way I much prefer Brelat's Fat Girl than this bu it is not a bad movie. Criminal Lovers does peak my interest

@joel65913-Ozon's earlier films are far more dangerous and confrontational yet always have something that is offbeat which is why I enjoyed them as he's become a much better filmmaker since then. New French Extremity is not for the faint of heart.

@Brittani-Unless you're interested in Leos Carax's work like Holy Motors and Lovers on the Bridge, this one isn't for you as it's kind of his most confrontational film so far.

@Katie-They're all interesting films if you want to see what filmmakers were willing to do with the idea of sex in cinema as it should be warned that it can be extremely fucking intense.

@Wendell-I've been interested about the whole movement for years and there's still a bunch of films of that movement that I haven't seen. A lot of those filmmakers have moved on from that as it was part of something that gave French cinema a kick in the ass.

@Chris-That's what I like to do. I like to make people uncomfortable as well as be the voice of sorts for overlooked and underseen films.

@TheVern-I'm going to see Fat Girl sometime this year as I have it as Blind Spot for this year as I'm very interested in the films of Catherine Breillat.