For the fifth week of 2018 as part of Wandering Through the Shelves' Thursday Movie Picks series hosted by Wanderer. We venture into films where there’s a story within a story as there’s a lot of film that features something a little extra that often serves as a purpose to the main narrative. Here are my three picks: 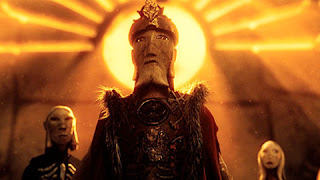 Guillermo del Toro’s 2008 sequel to the 2004 is definitely one of the most overlooked blockbuster films ever as it did a lot more with not just the titular character but also its supporting players as well as giving del Toro more to do with the film’s look and production values. One of the film’s finest sequences comes very early in which John Hurt’s Professor Bloom tells a young Hellboy the story about this Golden Army 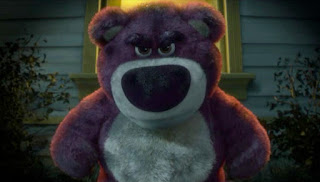 The films of Pixar had some people who were antagonists but not full-fledge antagonists but the character of Lotso was something completely different. Told by a former friend of Lotso in the clown Chuckles, it’s a story that starts off innocently but also has an element of tragedy of sorts which leads to Lotso becoming this toy that is just filled with rage. Especially in how he would find this daycare in Sunnyside and turn it into his own prison where toys are no longer safe unless they become loyal to him.

3. Harry Potter & the Deathly Hallows Pt. 1-The Tale of the Three Brothers 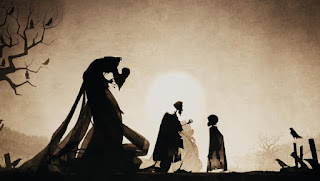 A key sequence read by the character of Hermione Granger from the book of The Tales of Beedle the Bard as it is about these three brothers who defied death. It is told in a rich animated sequence about these three brothers who would be given three objects in return for cheating death where it all relates to the story of the Deathly Hallows. One of which that Harry Potter has in his possession as it had belonged previously to his father and generations before this.

Interesting picks.
I haven't and won't see any HP, but of course I've seen Toy Story(ies) and love how they build characters with back stories.
I've been gearing up to Hellboy 2 with a series of Del Toro watches recently, so I'll be on that soon.

Love that you included TS3. That Lotso segment is amazing, as is the whole movie. Nice call on Hellboy II, also. Haven't seen the HP movie just yet.

Creative picks here, I like it! Toy Story 3 is a great pick, as is Deathly Hallows - I really liked both those stories within the movie.

I have seen all 3 and liked all of them. The first one is just a lot of fun. The 2nd made you think how some people’s misfortune turns them bitter and vengeful. The last one is great and I liked how they created that legend which so7nds like it is true act7ally.

I like the route you went here! I hate Toy Story 3, but I love the other two picks. You're right, Golden Army is underrated, that's my 2nd favorite GDT movie after Pan's Labyrinth.

I haven't. and probably never will see, any of the Hellboys and unlike most people I can't stand any of the Toy Stories so I'm out there as well but I did enjoy all the Harry Potter's and thought they got better as the series went along, which is rare.

This was a tougher week since the scope was rather narrow but after some poking and prodding I came up with these three.

Hellzapoppin’ (1941)- Projectionist Shemp Howard (ya one of the Three Stooges) is running a filmed dance number that turns into a funhouse ride collapsing into Hell where the dancers are tortured by demons until comics Olsen & Johnson arrive in a taxi and disrupt the scene. They call the scriptwriter in and we discover we’re in Miracle Pictures Studios (their slogan “If it’s a good picture, it’s a Miracle!”) where the boys are attempting to translate their Broadway hit show into a movie. Crazy patchwork quilt of a film throws everything, including a kitchen sink! into the mix and comes up with unrestrained lunacy that might make little linear sense since it bounces back and forth between stories but adds up to a very enjoyable viewing experience. Good cast with a standout Martha Raye. The source play was the longest running musical in history up to that point.

The Locket (1946) - Because of a false accusation of theft as a young girl a woman (Laraine Day) sets out for revenge on the world becoming a kleptomaniac, chronic liar, and eventually a murderess. The story is told in layered flashbacks (flashbacks within flashbacks) from different points of view. Complex thriller has many noirish touches and a good cast including a young Robert Mitchum.

The Fall (2006)-In a hospital ward in 20’s Los Angeles a young girl with a broken arm meets a seriously injured stunt man (Lee Pace) who as their friendship grows weaves elaborate stories in extravagant settings of different men who share a mission. As each story ends he asks her to forage in the hospital infirmary for morphine to help him endure his pain. Cryptic and challenging.

@assholeswatchingmovies.com-Watch Hellboy 2 or I shall feed you to the Chinese.

@Wendell-I know you're going to do a Harry Potter marathon as your Blind Spot so I hope you enjoy that one.

@Birgit-I'm glad you liked all of those films.

@Brittani-I'm glad someone else here loves Hellboy II as I think it's a rare sequel that is better than the first.

@joel65913-You need to see Hellboy and Hellboy II or I'll tear your fucking head off and shit down your fucking throat. I've seen The Fall and it's alright but kind of overrated.