New Wave: Dare to Be Different 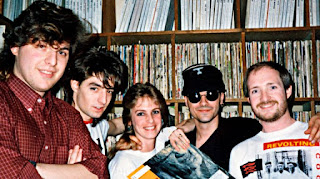 Directed by Ellen Goldfarb and written by Jay Reiss, New Wave: Dare to be Different is the story of a small radio station in Long Island, New York that would introduce listeners to new music that would introduce Americans to new wave, punk, and alternative music for much of the 1980s. The film chronicles the station’s beginnings and how it would support this new wave of music from Britain as well as underground American music to a mass audience only to fall prey to the FCC. The result is a fascinating and enjoyable film about a little radio station that managed to make a difference.

WLIR (92.7 FM) on Long Island, New York was a radio station that was small as it only came across a range smaller than more well-established radio stations in New York City and around the U.S. While it started in the late 1950s as the first radio station in Long Island, it largely played middle-of-the-road music before going into the rock format in the 1970s where it was playing the kind of music that everyone else was playing. It started to change in the late 1970s/early 1980s where the station began to move away from playing rock as program director Denis McNamara was getting records from Britain before they arrived in the U.S. as well as the new wave music that was emerging in America. In 1982, they officially changed their format to just playing punk, new wave, post-punk, reggae, ska, and what would later become alternative music as well as be the first to introduce acts such as Duran Duran, Madonna, Prince, U2, and many others to Long Island and parts of New York City and New Jersey.

The documentary which feature interviews with many acts and artists whose music was played on WLIR including the Alarm, Billy Idol, A Flock of Seagull, Joan Jett, Blondie, Talking Heads, the Cure, Depeche Mode, Ultravox, and many others talked about the impact that the station had where they had their music played before every other radio station played their music. One noted song that made an impact just six months before it was to be released in America was Frankie Goes to Hollywood’s Relax where a week after it had been released in its native country in Britain. WLIR got a copy of the single via import and played it much to the dismay of the record companies yet it became very popular among its listeners and gave the group a lot of buzz.

It wasn’t just the artists that really felt grateful for the station but also towards the deejays and people who worked at the station as they were open to new things as the deejays also connected with the listeners. The fanbase in Long Island were die-hard loyalists who really loved what the music was playing as the station would do business with local clubs in Long Island that played the same music as it became its own thing. Then there were little things such as a period devoted to reggae or reggae-based music as well as a weekly contest to choose a song that would be the popular song of the week as Sire Records founder Seymour Stein often went to that contest to make the decision of what the next single should be. Radio personalities such as Matt Pinfield, Gary Dell’Abate, and Lori Mjewski talked about the radio’s impact as Dell’Abate had interned for them before working with Howard Stern as he saw how they did things and what made them unique.

Director Ellen Goldfarb would interview the artists, radio personnel, and the fans themselves with the help of cinematographer Greg Daniels in shooting the interviews including a scene where McNamara and another key figure in WLIR would go into the building where it used to be. McNamara and the people in the station revealed how the station fell in 1987 due to some licensing issues with the FCC as it never came back on air despite winning an award for Alternative Station of the Year. Editor Allan Holzman would compile some of the rare footage of the station including the music videos and performances of the songs that defined the station. Sound editor Frederick Helm would compile station call backs and such of those times including a rare audio clip of a performance from U2 in 1985 at the Nassau Coliseum in Uniondale, New York where they thanked the station for being the first American station to play them on the radio.

New Wave: Dare to Be Different is a marvelous film from Ellen Goldfarb. Featuring an array of appearances and interviews from those who benefited from the radio station as well as the people who listened to the station. It’s a documentary film that showcases the impact of a small radio station in Long Island did to the world of music and what it meant to so many people in an age where radio is now owned by corporations. In the end, New Wave: Dare to be Different is a remarkable film from Ellen Goldfarb.

I've never heard of New Wave: Dare to be Different. You've sold me on it, even though I have no prior knowledge of the Long Island radio station in question. As a music fan, it sounds like something I'd get a kick out of.

@Chris-This was on Showtime like a lot of the other music docs that I've seen lately as this was different but fun. I was hooked because of the music. Some of the artists whose music is played appear in the film talking about their love for that radio station. Nick Rhodes of Duran Duran is still in shock that their band 16 Screamers of the Week as it prove how popular they were. Especially in a little place like Long Island which used to be farmland that grew food during both World Wars before becoming a suburban island.

I grew up in Stamford Ct and was a loyal listener to this station once they Dared To Be Different. I was a punk and New Wave fan Since seeing the Movie Times Square in 1980? The DJ's were like friends and the ads the station ran were often hilarious.

I miss WLIR & never listened to the new version.

@Jeff M-I had my own kind of station that played good tunes in the late 1990s where they played music from the 80s as it later became a regular thing at noon during the weekdays known as the Retro Plex on 99X in Atlanta (no longer exists). I understand what you're feeling. DJs back then were you friends and they didn't really say much about sponsors and such. I remember the host of that show at one point refused to play Fine Young Cannibals because 2 of the guys in that group didn't appear on the show Bands Reunited which would've had the English Beat reunite for one show only. He was PISSED off that anyone who requested Fine Young Cannibals would get cut off. Another time he got angry was during that reality show Rock Star: INXS where he talked about the horror that is the new singer and played a snippet of "What You Need" sung by that asshole. I screamed in horror myself as I was like "turn it off!" He says he will never play that ever again (and kept his word) as he ended up playing the original song. I miss those days. Radio sucks now.