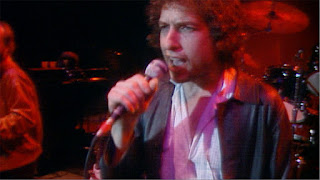 Directed by Jennifer LeBeau, Trouble No More is a documentary film of sorts that chronicles a brief period in the life and career of Bob Dylan from 1979 to 1981 where he had converted to Christianity and made a trilogy of gospel-based rock albums that would alienate many of his fans during that period. The film would feature footage directed by Ron Kantor from two concerts in Buffalo, New York and Toronto in 1980 as well as rare rehearsal footage that is inter-cut with new footage of a preacher spouting out sermons written by Luc Sante as he’s played by Michael Shannon. The result is a fascinating and offbeat film from Jennifer LeBeau.

Following a tumultuous period in the mid and late 1970s in which Bob Dylan was going through a divorce and other personal issues while his career hit a slump following the mixed reception of his 1978 album Street-Legal as well as the poor reception towards his concert/fictional film Renaldo and Clara. Something happened in late 1978 when a fan threw a silver cross on the stage as Dylan, unexpectedly, picked it up and suddenly converted to Christianity. This would lead to a trilogy of albums in Slow Train Coming, Saved, and Shot of Love from 1979 to 1981 as the album would alienate many people who had been following Dylan’s music from the early 1960s from his period of folk to rock music.

The film is a look into this period which opens with a rehearsal in Los Angeles with a small number of African-American female gospel singers and a group of musicians including drummer Jim Keltner, keyboardist Spooner Oldham, guitarist Fred Tackett, and bassist Tim Drummond. It shows how serious Dylan was with the music which is actually quite loose in comparison to a lot of the contemporary Christian/gospel music of the times and even afterwards which then cuts to a scene of people being baffled by Dylan’s conversion to Christianity and how disappointed they were in him not playing any of his older songs. The footage of the concerts that were filmed by Ron Kantor for two different shows in 1980 showcase the kind of music Dylan was doing which was raucous but also had lyrics that related to Christianity and God.

Director Jennifer LeBeau would inter-cut the songs in between the sets with filmed sermons by this preacher who speaks on the ills of the world over the inequality that people face and the things that are poisoning the soul. Shot by cinematographer Ellen Kuras with the preacher’s suit designed by Jessica Zavala, it is shot in a church where the preacher speaks Luc Sante’s written sermons as it brings some context into why Dylan had converted from Judaism to Christianity in that time. Yet, it does bear elements of realism as it’s told with such conviction by Michael Shannon whose voice does speak volumes as it is captured with such naturalism by sound mixer Jerry Stein.

Editor Damian Rodriguez would provide some straightforward edits in the sermon scenes while compiling much of the concert footage that is shown as it does reveal that there was an audience receptive to the music Dylan was doing at the time. Even though this period was brief as Dylan would return to more secular music while Dylan would distance himself from Christianity though he would return to Judaism while would occasionally perform songs from those trilogy of albums.

Trouble No More is an excellent film from Jennifer LeBeau. It’s a film that showcases a fascinating period in Bob Dylan’s career as well as be told in an unconventional fashion which is typical of Dylan as the filmed sermons with Michael Shannon are a joy to watch. While casual audiences might not be into the presentation, it is a film that fans of Dylan will enjoy. In the end, Trouble No More is a brilliant film from Jennifer LeBeau.

Related: Dont Look Back - No Direction Home - I'm Not There

This reminds me that I own I'm Not There and still haven't watched it yet. I don't know a lot about Dylan, but I think my husband would dig this. He likes him.

Thanks for bringing to my attention. I never understood why Dylan decided to make gospel albums so this documentary could help explain why.

@Brittani-If you have Cinemax, be on the look out for it as I recorded it in the spur of the moment and decided to watch it. I know it was a baffling period in Dylan's career but it was at least interesting.

@Chris-The doc doesn't actually explain why he turned to Christianity as it's more about the music he was making as well as the sermons that Michael Shannon is doing. It's very unconventional but that is typical of Dylan. If you read things on Dylan, there was this reason he went to Christianity for a while. It related to the fallout of his divorce, other personal issues, and some creative issues for him.