For the 14th week of 2018 as part of Wandering Through the Shelves' Thursday Movie Picks series hosted by Wanderer. The subject is on films from the underground. Films that are either didn’t get played in theaters and made their popularity through late night movies or films that were seen one day and then gone tomorrow only to be discovered years later. Here are my three picks: 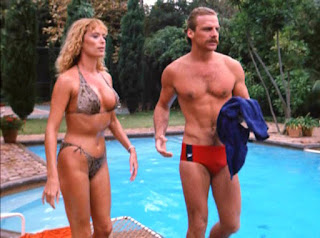 For anyone who grew up in the 1980s and 1990s and spent a lot of time staying up to watch skin flicks probably know who Andy Sidaris is. A man who basically perfected a simple genre of girls with guns. Yet, it’s often beautiful women with nice figures who weren’t afraid to show what they got as well as be badasses. The film is about a private investigator who tries to solve a murder case that gets more complicated due to the fact that all of the suspects, including the widow, are all gorgeous women. It’s got action, it’s got comedy, and most of all. It has a fine-looking chick named Knockers who definitely lives up to the name and more. 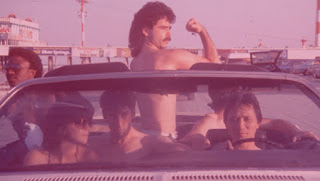 A film that came out in the late 80s and disappeared into obscurity until discovered by the Alamo Drafthouse in the late 2000s and brought it back to life in 2012 comes a film that is cheesy but so fun to watch. It’s a film with a simple premise in which a martial arts band that just wants to make good music and bring peace that is forced to deal with a gang of biker-ninjas who want to take over a club for their drug enterprise. It’s got some moments that are unintentionally-funny but it never takes itself seriously as it’s just a fun martial arts film with some good tunes. 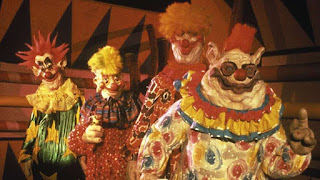 A film that I wasn’t fond of at first when I was a teenager that I’ve now grown to love as an adult is probably one of the silliest horror comedies ever made. It involves a group of alien killer clowns from outer space who arrive into a small town and just kill everyone with only a handful of people including a cop and two brothers selling ice creams from their ice cream trucks to save the world. It’s cheesy, it’s ridiculous, extremely silly, and not high-brow cinema at all. Then again, does it need to be high-brow when it is so fun to watch?

Well you went a different way with this but that's great!

The only one I'm certain I've seen is Malibu Express which is so typically 80's T&A cinema it should be in the dictionary under that heading! My favorite fun fact about it is that the star Darby Hinton played the squeaky clean and innocent Israel Boone on the 60's Daniel Boone series.

I'm pretty sure I saw Miami Connection on one of those late night cable 90's stations but these films all have a tendency to blend together.

The title Killer Klowns from Outer Space is great but the movie looked to stupid to bother with so I never did.

I went with the more literal meaning of underground and all three of mine take place at least partly beneath the earth.

Transatlantic Tunnel (1935)-Engineer Richard "Mack" McAllan (Richard Dix) proposes the building of a tunnel to connect England and the United States though revolutionary new technology. The film follows the many years and problems encountered as the realization of the project progresses. Futuristic early sci-fi posits the construction of an undersea tunnel linking England with the United States was one of the first film allegories to attempt to strengthen the US/UK bond as the dark clouds of war began to waft through Europe. Though little known today this was a high profile project at the time with two of the most esteemed actors in film, Walter Huston and George Arliss, as the President of the United States and Prime Minister respectively.

Journey to the Center of the Earth (1959)-Sir Oliver Lindenbrook, a Scottish geologist (James Mason) and his assistant Alec McEwan (Pat Boone!) set off on an expedition to the center of the earth after finding directions in an inscription hidden in volcanic rock. Along the way to an Iceland volcano to begin their journey Carla Göteborg (Arlene Dahl) the widow of a famous scientist, Icelander Hans Bjelke (Peter Ronson) and his pet duck Gertrud join their party. On their way they encounter, treacherous terrain, subterranean oceans, prehistoric monsters and rival scientist Count Saknussemm (Thayer David) who is on their trail. The sets and effects are very dated by today’s standards but still a fun adventure.

Daylight (1996)-When robbers fleeing police collide with trucks carrying toxic waste inside New York’s Holland Tunnel a fireball results collapsing both ends and trapping a disparate group of survivors who turn to the disgraced former chief of Emergency Services Kit Latura (Sylvester Stallone) now working as a cab driver and trapped with them “the only man capable of saving the day!” Typical Stallone nonsense but vigorous and actiony if undemanding.

I love the route you went! I was one of those who stayed up late watching skin flicks on lots of nights in the 80s and 90s. That makes me confident enough to say you could've put Andy Sidaris's whole filmography on here. All of his movies, including this one, are all lots of fun. So is Killer Klowns. Haven't seen your other pick but it sounds like a blast.

I had absolutely nothing this week so I skipped it. I like that you want on a different route than everyone else. I haven't heard of any of your picks before but Killer Klowns from Outer Space sounds fun. I'll definitely check it out.

I like this route! i haven't seen any, though I want to say I've seen parts of Killer Klowns? It seems so familiar.

@joel65913-Yeah, I was confused by the theme as I wasn't sure if it meant films set in the underground or underground cinema so I went with the latter. I'm glad to know that you liked Malibu Express.

@Wendell-I just bought a 3-disc set of Andy Sidaris' films for less than $10 at Barnes & Noble (I can't believe they would sell that let alone for $10 w/o coupons). Those films are so awesome. If you have Turner Classic Movies, they always show underground movies in the weekend and they played Miami Connection and they also screened Hard Ticket to Hawaii. What channel does that?

@Sonia-Killer Klowns from Outer Space is stupid and cheesy but goddamnit, it's so fun to watch.

@Brittani-Killer Klowns I'm sure you've probably seen if you grew up in the 80s and 90s as it was on TV all the time. It's kind of the so-bad-it's-good realm but it's so funny.