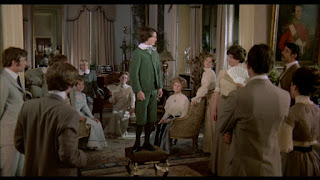 Based on the novel by L.P. Hartley, The Go-Between is the story of a young boy who is invited to his rich friend’s home where he becomes a go-between for his friend’s sister and a tenant farmer neighbor who are having an affair. Directed by Joseph Losey and screenplay by Harold Pinter, the film is a coming-of-age film in which a young boy discovers love and its many complications as well as the differences of social classes and environments. Starring Julie Christie, Alan Bates, Margaret Leighton, Edward Fox, Michael Gough, and Dominic Guard. The Go-Between is a ravishing and evocative film from Joseph Losey.

Set in the span of a summer in the Norfolk countryside in the year of 1900, the film revolves around a 12-year old boy who becomes a messenger for his best friend’s older sister and a farmer who lives nearby unaware that they’re having a secret affair. It’s a film that plays into a boy dealing with the world around him in the course of the summer as he lives in an estate with this rich family where he befriends a young woman and her family. Harold Pinter’s screenplay is largely straightforward yet it would have bits of flash-forwards as it relates to its protagonist Leo Colston (Dominic Guard) who is given the chance to live in this lavish countryside estate in Norfolk, England for the summer with his friend Marcus Maudsley (Richard Gibson) whose parents (Michael Gough and Margaret Leighton) welcome Colston as they show him around their world. Yet, Leo is interested in Marcus’ older sister Marion (Julie Christie) who is also fascinated with Leo as she helps him fit in with their world as Leo notices Marion talking to a tenant farmer named Ted Burgess (Alan Bates) who lives nearby the Maudsley estate.

Pinter’s script would play into this growing conflict within Colston as he is asked by Marion to run to Burgess’ farm and give him a message and vice versa where he becomes this messenger unaware of the contents of these notes. Yet, Colston would figure out what is going on as Marion is being pursued by an estate owner in Hugh, Viscount Trimingham (Edward Fox) whom Colston meets and actually likes but he relates to Burgess more as they both come from similar backgrounds. Once Colston is aware of this connection between Marion and Burgess, he struggles to keep it a secret as he’s also coping with news within the family that would become troubling as suspicion emerges among family members as well as the news of Marion’s engagement to Hugh.

Joseph Losey’s direction does have bits of style in some scenes yet much of it is very straightforward to capture this posh and lavish world that Colston is surrounded by. Shot on location in various parts of Norfolk including Norwich, the film does play into this idyllic world where everyone is living in this lavish home and relax in open landscapes near farms where harvest hasn’t arrived yet. Losey would use wide shots to capture the beauty of the farmland and gardens while he would maintain an intimacy through the close-ups and medium shots for much of the drama. Notably the scenes where Colston would engage Marion or Burgess in their present environment as Colston would walk or run through fields to be their messenger. Yet, things would intensify during the film’s second act with the presence of Hugh who isn’t a bad man but he’s more of a man that is suitable for Marion in terms of social status.

Since the film also would feature these offbeat flash-forwards as it relates to an old man (Michael Redgrave), it would play into Colston’s own role in this secret affair as he’s also in the world of magic where he would try to infuse his wisdom in magic to help them. Instead, things become complicated as Colston would endure not just disappointment but also ideas of adulthood as it would climax with his thirteenth birthday party hosted by Mrs. Maudsley who has been suspicious of her daughter’s frequent disappearances. The moment wouldn’t just be a loss of innocence for Colston but also a truth that many are forced to face as it relates to the idea of love and the taboos it has in high society. Overall, Losey crafts a majestic yet haunting film about a boy being a messenger for two lovers in a secretive affair in the summer of 1900 in Norfolk, England.

Cinematographer Gerry Fisher does excellent work with the film’s cinematography as it play into the natural beauty of the British countryside in the daytime exteriors with the usage of low-key lights for the scenes at night. Editor Reginald Beck does terrific work with the editing as it is largely straightforward with a few jump-cuts to play into the flash-forwards in the film. Art director Carmen Dillon does brilliant work with the art direction with the look of the estate as well as its interiors as well as Burgess’ farm. Costume designer John Furniss does amazing work with the costume with the look of the dresses the women wore in those times as well as the clothes the men wore in high society in the early days of the 20th Century.

The makeup work of Bob Lawrence and hairstyling of Stephanie Kaye is fantastic for the hairstyles that the women had as well as the scar that Hugh sports on his face. Sound recordists Bob Bremner and Mike Rutter do superb work with the sound as it play into the natural elements of the locations as well as carriages sounded in those times. The film’s music by Michel Legrand is incredible as it is a major highlight of the film with its piano-based orchestral score that play into the drama as well as the sense of longing between Marion and Burgess.

The film’s remarkable cast include some notable small roles such as an early appearance from Jim Broadbent as a cricket spectator, Roger Lloyd-Pack as a family friend in Charles, Amaryllis Garnett as Marion’s friend Kate, Richard Gibson as Colston’s friend Marcus who would invite Colston to live with him during the summer, Michael Gough as Mr. Maudsley who is kind to Colston as they collaborate on things relating to nature, and Michael Redgrave in a small yet terrific performance as an old man in the film’s flash-forwards. Edward Fox is superb as Hugh, Viscount Trimingham as a noble figure and family friend of the Maudsley who would show Colston the ways of the world but is also aware of the class divide as he’s pursuing Marion just to ensure that she’ll be fine. Margaret Leighton is fantastic as Mrs. Maudsley as the family matriarch who runs the estate as she becomes suspicious about Marion’s activities outside of the home as well as what Colston does outside the home.

Dominic Guard is brilliant as Leo Colston as a 12-year old boy who is invited to stay at the lavish estate of his schoolmate where he deals with his surroundings as well as being a messenger between two people as he copes with all of the emotional complications that would lead to this loss of innocence. Alan Bates is amazing as Ted Burgess as a tenant farmer who lives nearby as he’s a simple man that likes to run his farm as he gives Colston some advice on life and love as he’s cagey about his relationship with Marion knowing that it would hurt her socially if anyone knew about it. Finally, there’s Julie Christie in an incredible performance as Marion Maudsley as a woman who is from a posh and respected family that finds joy in Colston as she asks him to be a messenger as she tries not to reveal her own feelings for Burgess as it’s a performance with a sense of restraint but also anguish over what she’s being asked to do and what she wants putting Colston in the middle.

The Go-Between is a sensational film from Joseph Losey that features top-notch performances from Julie Christie, Alan Bates, Dominic Guard, and Margaret Leighton. Along with its gorgeous setting, haunting premise, and Michel Legrand’s sumptuous score, it’s a film that explores a boy being caught in the middle over a secretive affair between two people of different social classes. In the end, The Go-Between is a spectacular film from Joseph Losey.

Fantastic movie. I found it so haunting in how it examined the cruelty of the upper class and the inevitable fallout.

@vinnieh-Exactly. It was an engrossing film to watch as well as something that more people need to see.

Such a beautiful looking film. I felt sorry for the boy who is not only trying to make sense of the world of the upper class that he doesn't know and also for playing the go-between which meant harbouring a secret that he should never have been made to carry.

@Wanderer-Yeah, it was an intense film that surprised me. Though the print I saw it on TCM wasn't that great, it was still a powerful film.