For the 18th week of 2018 as part of Wandering Through the Shelves' Thursday Movie Picks series hosted by Wanderer. We venture in films in which characters start over in the hope they embark on a new start in life. Here are my three picks: 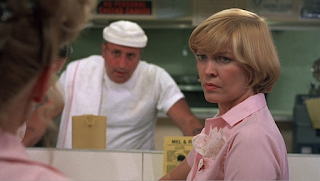 From Martin Scorsese comes a film that might seem unusual for a filmmaker who is known mainly for making films about men and their environment and flaws but this gem from 1974 proves that he can also tell stories about women. Starring Ellen Burstyn as a woman whose husband just died as she moves to the American southwest with her son in the hopes they can start a new life. It’s a film that has Scorsese play into the struggle that a woman endures as she has a son who is bratty and talkative while dating men who aren’t so nice with the exception of a rancher. Add Jodie Foster in the role of a tomboy who would get Burstyn’s son into all sorts of shit and you have one of Scorsese’s finest films that is often overlooked. 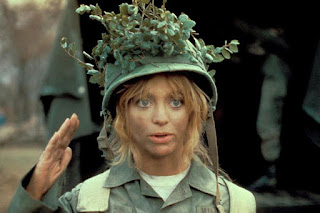 A woman’s life is shattered following the death of her husband (Albert Brooks) on their wedding night and what does she do? She joins the army. It’s a hilarious premise in a film starring Goldie Hawn as a Jewish princess who gets everything she wants and then is forced to start over by joining the army in the belief that it’s a holiday spa by her army recruiter played by the late, great Harry Dean Stanton. Along the way, Hawn manages to find herself and eventually realizes that she doesn’t need a man to make her happy. Only she can do that herself as it’s one of the great comedies of the 1980s. 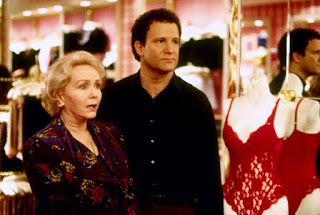 In another film that starred Albert Brooks is a film he also writes and directs about a sci-fi writer who endures another divorce and questions his own direction in life as he decides to start over by moving back home with his mother. Also starring Debbie Reynolds as Brooks’ mother, it’s a charming little comedy about a man trying to figure things out as well as re-establish his relationship with his mother who had been carrying secrets of her own. It’s one of Brooks’ finest films as a filmmaker as well as one of his most accessible films to date.

We have a match!! Alice Doesn't Live Here Anymore does seem like an anomaly for Scorsese but it does look at many of his recurrent themes. Have you ever seen the film that served as this one's inspiration-My Dream is Yours with Doris Day, Jack Carson and Eve Arden? It's a lovely little musical (Doris's second film) but it is VERY different from this one. Plus it includes a number with Doris and Gang teaming up with Bugs Bunny that is like some kind of fever dream. You can see where the germ of Alice came from though since Doris plays a young widow with a son trying to build a career in show biz.

For me Private Benjamin is 3/4 of a good movie. It starts well and builds from there but runs into problems in its third act before righting the ship near the conclusion. Goldie and Eileen Brennan are fantastic throughout.

Mother is so much fun! Debbie was robbed of an Oscar nomination I tell ya!! She pitches her performance at just the right key, to this day I will throw out some of her phrases-i.e. the protective coating on the ice cream which my own mother insists is a good thing! Brooks is good but the film belongs to Debbie.

Aside from our match one of my others involves starting afresh by moving and the other by reinventing yourself.

My Fair Lady (1964)-Coarse cockney flower vendor Eliza Doolittle (Audrey Hepburn) goes to Professor Henry Higgins (Rex Harrison) and his friend Col. Pickering (Wilfrid Hyde-White) after a chance meeting to teach her “how to talk genteel like” so she can get a job in a shop. On a bet with Pickering Higgins decides to remake Eliza and pass her off as royalty and she’s off to a fresh start! Harrison is inimitable and Audrey charming but you can’t help but yearn for Julie Andrews, who created the role on stage, and her bell like soprano. Sumptuous musical won Best Picture and is a treat for the eyes and ears.

Alice Doesn’t Live Here Anymore (1974)-Recently widowed Alice Hyatt (Ellen Burstyn) and her son Tommy leave their New Mexico town so that Alice can try her luck as a singer in California. In Arizona they find themselves short on funds and she takes a job in a small diner until they build up their resources again. But when she meets handsome rancher David (Kris Kristofferson) it looks like she might be making a new start of a different kind. Directed by Martin Scorsese this won Ellen Burstyn a Best Actress Oscar.

Under the Tuscan Sun (2003)-Freshly divorced and in a purple funk from which she seems unable to extricate herself writer Frances Mayes (Diane Lane) is gifted by her newly pregnant friend Patti (Sandra Oh) with a tour of Italy that Patti can’t take. Passing through Tuscany Frances impulsively buys a somewhat distressed villa and sets about rebuilding her life with the help of the colorful locales and a new romance. Charming and well-acted with breathtaking vistas you’ll want to jump the next flight to Tuscany when it’s over.

I still have to see Mother but want to. I really enjoyed Private Benjamin which I thought was really funny and would like to see this again. Alice was a good film and I totally forgot Scorsese directed this film since it wasn’t filled with tons of expletives. I watched the sitcom too

I haven't seen any of your picks this week.

I haven't seen any of these but Alice Doesn't Live Here Anymore is already on my list.

Haven't seen any of your picks but Alice Doesn't Live Here Anymore has been in my watchlist for years.

@joel65913-My Fair Lady... that's a film I can watch whenever it's on and find something new. I love that film. Under the Tuscan Sun is an alright film as it does have that great homage to.... La Dolce Vita.

@Birgit-I haven't seen the Alice sitcom though I heard it was funny.

@Brittani-See them, they're great films.

@Sonia-Alice Doesn't Live Here Anymore is a must if you're a fan of Ellen Burstyn as it's also one of Scorsese's more underrated films.

@Sofia-Alice is a must while Private Benjamin and Mother are just enjoyable comedies.