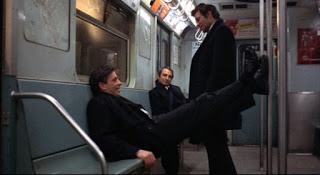 Written, directed, edited, and co-starring John Cassavetes, Husbands is the story of three men who hang out together as they deal with the death of a friend as they’re forced to deal with their own sense of mortality and next step in their lives. The film is a look into the lives of three friends who have all succeeded professionally and personally but deal with the specter of death as they wonder what will happen next when the unexpected happens. Also starring Ben Gazzara, Peter Falk, Jenny Runacre, Jenny-Lee Wright, and Noelle Kao. Husbands is a riveting and compelling film from John Cassavetes.

The film follows three men who all deal with the death of their friend as they ponder what to do next as they would try to reclaim elements of their youth amidst a mid-life crisis. It’s a film that play into these three men as they spend much of their time going out and just ask questions about life while they also deal with the state of their own lives professionally and personally. John Cassavetes’ screenplay is loose in terms of its structure as it doesn’t have much of a plot in favor of exploring these three men just doing whatever they can to pass the time whether it’s to go to a bar and drink or go to a gym and play basketball. Much of it has these three men figuring things out as Archie (Peter Falk) is talking about what he’s thinking while Gus (John Cassavetes) is dealing with what is next. Then there’s Harry (Ben Gazzara) who is a businessman with a marriage that is falling apart as he decides to go to London and takes Archie and Gus with him. The first half is largely set in New York City and areas nearby while the second half takes place in London where the three men get drunk, gamble, and meet other women as it would become this key moment of realization over their lost youth.

Cassavetes’ direction is very loose in terms of its presentation where there are no sets used in favor of shooting everything on location whether it’s in New York City and nearby areas as well as London for the film’s second half including a few scenes inside airplanes. While there aren’t anything stylized throughout the film, Cassavetes does maintain a sense of realism as he would shoot long monologues in one take while keeping the settings simple in the way he would frame a shot whether it’s in a close-up, a medium shot, or a wide shot. Though the film’s lack of plot and long takes would meander the film’s pacing where some of these moments go on for too long. Cassavetes would play into the sense of uncertainty these three men endure as well as the women they meet in London where the realization that they’re married and have kids come into play. Cassavetes’ editing is straightforward with a few jump cuts as it help play into the drama including the film’s climax as it relates to the decision of one of the characters and the reaction of the two. Overall, Cassavetes creates a captivating film about three men facing mid-life crises following the death of a longtime friend.

Cinematographer Victor Kemper does excellent work with the film’s cinematography as it is largely straightforward to play into the film’s realistic presentation. The sound work of James Perdue is terrific for its natural approach to sound to capture everything on location including the music as the only piece used that wasn’t recorded on location is a jazz piece during the film’s opening scenes.

The film’s incredible cast include some notable small roles from Nick and Xan Cassavetes as Gus’ kids, Eleanor Cody Gould as a singer at a bar, Claire Malis as the widow of the men’s dead friend, Meta Shaw Stevens as Harry’s wife, Lorraine MacMartin as Harry’s mother-in-law, Noelle Kao as an Asian woman Archie tries to flirt with in London, Jenny Runacre as Mary Tynan whom Gus tries to sleep with in London only for things to not work out, and Jenny Lee Wright as a Londoner named Pearl whom Harry meets and falls for during his time in London.

John Cassavetes is brilliant as Gus as a man that is lost in his grief as he tries to cope it with through sports and drink as his time in London would give him time to realize that he’s not a young man anymore. Peter Falk is fantastic as Archie as a man that is constantly talking about what he thinks in the wake of their friend’s death as he comes to term with himself and his own realization about his life. Finally, there’s Ben Gazzara in an amazing performance as Harry as a businessman that is dealing with a failing marriage as he is eager to reclaim his youth and lust for life as well as the fact that he is starting to lose sight of reality.

I haven't seen this, though it's intriguing that he just shot in random places in the cities and didn't have actual sets like you say. I really haven't seen many of his films.

@Brittani-This is the fourth film of his that I've seen so far. So far of the four films I've seen. This is third as the studio cut of The Killing of a Chinese Booking is my least favorite of his so far. I heard the fact that never created film sets and shoot it on a location makes it more interesting as it's often typical of who Cassavetes was as a filmmaker.