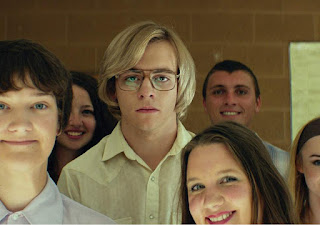 Based on the graphic novel by John “Derf” Backderf, My Friend Dahmer is about the early life of serial killer Jeffrey Dahmer during his time in high school and the events that would eventually shape into becoming one of the most infamous serial killers of the 20th Century. Written for the screen and directed by Marc Meyers, the film largely chronicles Dahmer’s senior year in 1977 and 1978 that would eventually lead to the moment he would commit his first murder as Disney teen pop singer/actor Ross Lynch plays the role of Dahmer while Alex Wolff plays the role of Dahmer’s classmate Derf Backderf. Also starring Anne Heche, Dallas Roberts, Tommy Nelson, and Vincent Kartheiser. My Friend Dahmer is a haunting and entrancing film from Marc Meyers.

From 1978 to 1991, Jeffrey Dahmer was infamous for killing, raping, and dismembering 17 people in the course of that period until he turned himself in only to die three years later when he was murdered in prison. Many wondered what made someone into one of the most infamous serial killers of the 20th Century as the film is about a year in the life of a young Jeffrey Dahmer just before he would commit his first murder. Marc Meyers’ screenplay is really the study of a young man who is about to become unhinged in his young life as he doesn’t just deal with being a social outcast during his senior year of high school. He would cope with growing tension between his parents, his homosexuality, his inability to fit in, and dependency on alcohol. The first scenes show Dahmer having an interest in dead animals where he puts them in jars full of acid just for the bodies to dissolve as he has an interest in bones.

Much of the film’s script doesn’t just follow Dahmer’s descent into rage and disappointment but also the events that would shape the life of a young man who would later become extremely dangerous. Even as he was forced by his father Lionel (Dallas Roberts) to stop collecting dead animals in order socialize where he would get people’s attention by pretending to have spasms to the point that one of his classmates in Derf Backderf would form a little club that would allow Dahmer to act out erratically. Eventually, the stunts that Dahmer would do eventually become troublesome with one of Derf’s friends in Neil (Tommy Nelson) becoming uncomfortable with the effects it is having on Dahmer. Derf is seen as someone who would continuously push Dahmer to act out as a way to inspire his work as an artist but he would eventually realize that something is off. Especially as he would see a glimpse into Dahmer’s family life which show Dahmer’s parents fighting and a sense of neglect towards their eldest son not knowing that he is unraveling.

Meyers’ direction is riveting in the way he captures Dahmer’s young life in the 1970s at a small suburb in Ohio where much of the film is set and shot at around these small towns of Bath and Middleburg Height. Much of Meyers’ direction is straightforward with some intoxicating imagery and compositions to play into Dahmer’s sense of detachment from the world as he prefers to be in this small shack with his collection of dead animals that would eventually be destroyed by his father. The usage of the wide and medium shots help play into that air of detachment as there aren’t many close-ups in the film as it is about Dahmer’s sense of disconnect with the social ideas of high school. There are also these eerie scenes that play into Dahmer’s secretive homosexuality where he gazes at a jogger who he sees every now and then and later meets him. There are these dark moments of humor where Dahmer would have fake spasms where it would be comical but it would also take a dark turn as it shows Dahmer unraveling little by little.

Notably as Meyers shoots a lot of the scenes at home with Dahmer’s back in front of the camera as it is clear that he’s being neglected by his parents with his mother Joyce (Anne Heche) relapsing into her own mental illness that prompts her to be unpredictable as well as be inattentive. Meyers’ direction also showcase elements of surrealism as it relates to Dahmer’s fantasy for the jogger but also this growing sense of rage that is looming with his parents being unaware of his actions. Even as the film’s final moments play into Dahmer’s isolation as well as some revelations for Derf who would get a closer look into the damage his pranks involving Dahmer would inflict. Overall, Meyers crafts an unsettling yet somber film about the makings of a future serial killer in his senior year in high school.

Cinematographer Daniel Katz does excellent work with the film’s cinematography as it play into some of the natural colors of the forests and low-key lights for the scenes at night that does help create a mood in how Dahmer sees the world. Editor Jamie Kirkpatrick does terrific work with the editing as it is largely straightforward with some rhythmic cuts and jump-cuts to play into some of the dark humor of Dahmer’s spasms and in some intensely-dramatic moments. Production designer Jennifer Klide and set decorator Carmen Navis do fantastic work with the look of the Dahmer family home as well as the interior of the school to play into the look of the late 1970s.

Costume designer Carla Shivener does nice work with the costumes as it play into what kids wore in the 1970s as well as some of the strange clothes that Dahmer’s mother wore. Sound editor Coll Anderson does superb work with the sound as it play into some of the quieter moments in the forest as it relates to Dahmer’s interest in dead animals as well as some scenes in the school which add to Dahmer’s descent. The film’s music by Andrew Hollander is brilliant for its eerie and somber ambient score that help play into Dahmer’s slow descent as well as some of the dramatic elements of the film while music supervisor Jonathan Leahy creates a soundtrack that largely consists of music from the 1970s including Badfinger, Stephen Bishop, Rocket from the Tombs, T. Rex, and other artists from that decade.

The casting by Stephanie Holbrook is wonderful as it feature some notable small roles from Liam Koeth as Dahmer’s younger brother Dave, Jack DeVillers as an early friend of Dahmer in Oliver, Tom Luce as then-Vice President Walter Mondale whom Dahmer got his classmates to meet through a phone call, Sydney Jane Meyer as Dahmer’s senior prom date, and Vincent Kartheiser in a small yet terrific performance as Dr. Matthews as the jogger that Dahmer obsesses over where Dr. Matthews examines him leading to a very uncomfortable moment. Harrison Holzer and Tommy Nelson are superb in their respective roles as Derf’s friends Mike and Neil as two classmates who encourage Dahmer to do spasms with the latter feeling remorse over the pranks they’re creating believing Dahmer is starting to unravel.

Dallas Roberts and Anne Heche are fantastic in their respective roles as Dahmer’s parents Lionel and Joyce with Roberts displaying a sense of frustration over his son’s anti-social hobbies in the hopes he can fit in while Heche provides an energetic performance as Dahmer’s mother who is becoming unhinged in her mental state as well as becoming neglectful towards her eldest son. Alex Wolff is excellent as John “Derf” Backderf as a classmate who takes an interest in Dahmer’s antics as he would start a fan club to get Dahmer to act out where he would create drawings of Dahmer only to eventually see what he’s unraveled from Dahmer. Finally, there’s Ross Lynch in what is truly a revelatory break-out performance for the young actor in the role of a young Jeffrey Dahmer. Lynch’s physicality in the way Dahmer presents himself as well as how he performs Dahmer’s spasms are chilling including the quieter moments that play into this awkwardness into his attempts to socialize as well as the rage that is building as it is truly an incredible performance from Lynch.

My Friend Dahmer is a phenomenal film from Marc Meyers that features a tremendously chilling performance from Ross Lynch. Along with its supporting cast, intense character study, an eerie music score, and haunting visuals, it is an unconventional yet ravishing portrait of a young man who would become one of the most infamous serial killers of the 20th Century. In the end, My Friend Dahmer is a sensational film from Marc Meyers.

I recently watched this too and I enjoyed it too. It's an interesting approach on the subject.

@Ted S.-I've heard about that film and I don't remember if I've seen it other than a few clips but I do know that Jeremy Renner played Dahmer. I do remember that it was on Showtime a lot in the early 2000s.

@Brittani-Agree and I'm still kind of shocked in seeing Ross Lynch play someone who would become the serial killer that we all know. It's a performance that I think is overlooked and hope he gets to do some major work whether it's in drama, comedy, or musicals. He's got the chops.

I think illI be watching this one over the weekend. If not, it'll be early next week. I'll have to come back after that.

@Wendell-This was on Cinemax for a while as I started watching some of it late at night and decided to watch the whole thing a few days ago. It's eerie yet I found myself pitying Dahmer for the fact that he was just a troubled kid that was being neglected and used for other people's amusements. I'm sure your kids probably know who Ross Lynch is from Austin & Ally and I'm still shocked that he played someone like Jeffrey Dahmer.