For the 27th week of 2018 as part of Wandering Through the Shelves' Thursday Movie Picks series hosted by Wanderer. We venture into sequels but sequels that came years later after its predecessor. It is often made after a period of more than five years where it has this air of excitement but then there are those films that were probably great that didn’t need a sequel only to finally come with a sequel with this air of excitement only to be met with disappointment. Here are my three picks: 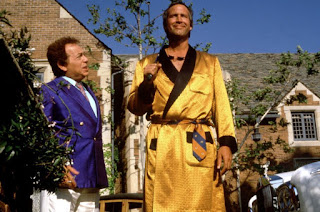 Released eight years after the first film which is a classic in its own right that didn’t really need a sequel. The second film was supposed to have Rodney Dangerfield reprising his role as Al Czervik as Dangerfield was the one that wanted to do a sequel but clashes with the studio forced him out of the film leaving its original director Harold Ramis in deep shit as he had no real involvement with the final product. Instead, Dangerfield was replaced by Jackie Mason with Robert Stack playing a version of Ted Knight’s Judge Smails while Chevy Chase makes a cameo appearance as Ty Webb which is the definition of someone phoning it in. It’s just a really bad film with a PG rating that doesn’t work and with characters who aren’t just interesting nor funny. It was shit. 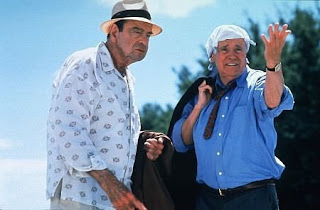 Made thirty years after the original film, the idea of seeing Jack Lemmon and Walter Matthau reprise their respective roles as Felix Unger and Oscar Madison should’ve been a great idea. Two old buddies who are the total opposites of each other going on a road trip through California to attend their children’s wedding should’ve been a fun idea. Unfortunately, that isn’t what happened as it wasn’t just that Neil Simon’s script was uninspiring but it also shows that Lemmon and Matthau couldn’t rise above the material and neither of them looked like they were enjoying themselves as they wanted the film to just end. It was bad and certainly a disappointing way for Lemmon and Matthau to have their last film together to be a complete and total dud.

3. Dumb and Dumber To 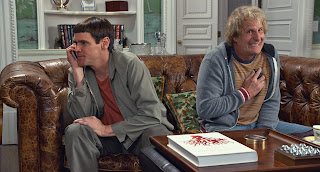 Made 20 years after the original film which was also considered a comedy classic for its emphasis on toilet humor and other idiotic comedy. What could go wrong with a sequel about two idiots? Well… everything went wrong as it should be said that Peter and Bobby Farrelly haven’t made a watchable film since Me, Myself, and Irene back in 2000 as they just films that were mediocre to just fucking awful. Trying to catch lightning in a bottle once again and get Jim Carrey and Jeff Bridges to reprise their roles as Harry and Lloyd should’ve been the comeback. Wrong again. Instead, the humor is just uninspired. Gags just don’t work and it has also material and scenes that will date the film that includes a cameo from a woman from some reality show called Honey Boo-Boo. It was just fucking stupid and never brought any kind of laughs.

Yuck! You definitely picked some that didn't work. Caddyshack II was just a pure disaster.

I like the theme within a theme you went with here. Fortunately I've avoided all three of these films.

Dumb and Dumber To is the only I've seen and I was not a fan of it. What a dreadful film.

I didn't care for either Caddyshack nor Dumb and Dumber so I never watched the sequels but agree complete on the woebegone Odd Couple II. Such an unfortunate wrap-up for those two giants.

My first and third are films that didn't meet the expectations anticipated, though not on the grand scale of yours, but my second maybe because those expectations weren't so high turned out okay.

The Godfather: Part III (1990)-Long aborning (16 years between this and Part II) wrap up of the Corleone saga isn’t terrible but a mere shadow compared to the first two. A HUGE weak point is the decision by Coppola to cast his daughter Sofia (a decent director but an atrocious actress) in a key role.

The Rescuers Down Under (1990)-Thirteen years after The Rescuers the R.A.S. (Rescue Aid Society) sends their top two agent mice Bernard (Bob Newhart) and Miss Bianca (Eva Gabor) down under to save a Golden Eagle from the evil trapper McLeash (George C. Scott). So they hop on their trusty albatross Wilbur (John Candy) and are off on their big adventure.

Indiana Jones and the Kingdom of the Crystal Skull (2008)-Nineteen long years after Indiana Jones and the Last Crusade came this uninspired follow-up. It not that the film is horrible but for a Spielberg adventure, especially one with Ford in this role, it’s uninspired. It’s nice to see Karen Allen back in the fold but the idea that she and Ford would produce Shia LeBeouf (!!) takes the film even further into the negative category.

I think my mom would have loved me to add The Odd Couple to this list. She has seen those movies more times than she can count. Meanwhile I have seen only the first one. A shame really, I have only fond memories of it.

I love Caddyshack, the sequel sounds skippable. Of upcoming long awaited sequels, I want to see Top Gun 2, Bill & Ted 3, and the Terminator film that picks up after T2. I have low expectations though.

Comedy isn't my favourite genre, so it's no surprise that I haven't seen any of these.

@Wendell-It was so unfunny (except for Chevy who was definitely phoning it in) as that's one of those sequels I wished never existed.

@Brittani-Good, stay away from those films and you'll feel good.

@Sonia-Sad you had to see that piece of shit.

@joel65913-The Godfather Part III was a disappointing sequel except for Eli Wallach as Don Altobello who I think is one of the most underrated villains in cinema. I prefer to deny the existence of that four Indiana Jones film. I wished I never saw it in the theaters.

@Getter-The Odd Couple is a film that still holds up in its humor but the 2nd one for all of its hype was just terrible. I just prefer to have Out to Sea as the last great film of Lemmon and Matthau as that was funny.