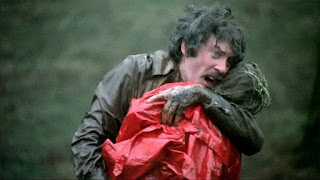 Based on the short story by Daphne du Maurier, Don’t Look Now is the story of a couple traveling to Venice as they deal with the recent death of their daughter where they start to encounter strange things that they see or is around them. Directed by Nicolas Roeg and screenplay by Allan Scott and Chris Bryant, the film is an unconventional suspense-drama that play into a couple’s grief as they encounter strange events during their trip to Venice. Starring Julie Christie, Donald Sutherland, Hilary Mason, Clelia Matania, Massimo Serato, and Renato Scarpa. Don’t Look Now is a haunting and evocative film from Nicolas Roeg.

Following the death of their daughter at a small pond in their backyard, the film follows a couple as they go to Venice to deal with their loss while the husband works in restoring an ancient church as he would see strange things as it relates to his grief. It’s a film that play into the ideas of death where a couple both have different ideas of coping as they also deal with things that are unexplained. The film’s screenplay by Allan Scott and Chris Bryant follow John Baxter (Donald Sutherland) and his wife Laura (Julie Christie) as they’re in Venice for the former’s work while the latter meet two elderly sisters in Heather (Hilary Mason) and Wendy (Clelia Matania) as the former is blind but is also a psychic. While Laura is still reeling from the loss of her daughter, she finds solace through Wendy’s psychic contacts believing that the Baxters’ daughter Christine (Sharon Williams) is trying to contact them.

Laura believes it is true but John is skeptical although he would see strange things involving someone wearing a red coat similar to what Christine wore on the day she died as well as things that Laura believes is Christine trying to contact them. John focuses on his work while accepting that his daughter had died but the mysterious encounters and near-death experiences have him wondering if there is something going on. Even when Laura briefly leaves Venice to return to England to check on their son Johnny (Nicholas Satler) who had been injured in school where John stays behind as he becomes befuddled by what he believes is real.

Nicolas Roeg’s direction is stylish from the film’s opening sequence that starts off innocently with two kids playing in the backyard while John and Laura are at home doing their usual activities until John notices something and runs to the pond to find his daughter drowning. Shot largely on location in Venice with the scenes in England shot at Hertfordshire, Roeg would use some wide shots to establish the locations but also to maintain that air of intrigue in what John sees as it relates to the mysterious figure in the red raincoat in scenes at the canal bridges in the city. Roeg would also use medium shots and close-ups for some of these moments as the latter would play into ideas of symbolism as if they’re signs of what is to come. Roeg would slowly build up the ideas of suspense while maintaining an atmosphere that does play into grief with Laura turning to Wendy and Heather for help as she is convinced that something isn’t right and that she and John should leave Venice.

With this air of grief and loss, the film would include this intense sex scene that is shot with some hand-held cameras and is cut in a montage of the John and Laura getting ready for a night on the town. There is an air of realism into the sex scene as it play into their love for each other and the need to cope with their loss. Yet, the strange events that occur including one near-death experience for John would play into what is happening and why. Notably in the third act as the ideas of reality and fantasy begin to blur as recurring images of Christine’s drowning would also emerge as Roeg would also include this strange subplot about a series of mysterious murders in Venice. Particularly as it would collide with the main story that has John wondering if everything he sees is real or is it all a fantasy. Overall, Roeg crafts a rapturous yet eerie film about a couple’s grief manifesting into strange events in Venice.

Cinematographer Anthony Richmond does brilliant work with the film’s cinematography with its low-key approach to lighting for many of the exterior scenes at night along with the usage of lighting for some of the interior sets in the film. Editor Graeme Clifford does excellent work with the editing as it has these stylish usage of montages such as the sex scene as well as other stylish moments that play into the suspense and blur between reality and fantasy. Art director Giovanni Soccol and set decorator Francesco Chianese do amazing work with the look of the hotel room the Baxters were staying at as well as some of the interiors of the church that John is restoring.

Sound editor Rodney Holland does fantastic work with the sound as it help play into the suspense and drama as well as creating moments that add to locations. The film’s music by Pino Donaggio is incredible for its rich and hypnotic score with its usage of piano, flutes, and string instruments to maintain that chilling approach to suspense and drama as it’s a highlight of the film.

The casting by Miriam Brickman and Ugo Mariotti is wonderful as it include some notable small roles from Nicholas Satler as the Baxters’ young son Johnny, Sharon Williams as their daughter Christine, David Tree and Ann Rye as a couple who run Johnny’s school, Leopoldo Trieste as the hotel manager, Renato Scarpa as a police investigator in Inspector Longhi, Bruno Cattaneo as a detective in Sabbione, and Massimo Serato as Bishop Barbarrigo as a man who is concerned about John’s state of mind while wondering if what he’s seeing is true. The performances of Hilary Mason and Clelia Matania are amazing in their respective roles as the sisters Heather and Wendy with the former being a blind psychic who believes something would happen to the Baxters while the latter is this warm person that is sort of Heather’s spokesperson as she is also aware something isn’t right.

Finally, there’s the duo of Julie Christie and Donald Sutherland in phenomenal performances in their respective roles as Laura and John Baxter. Christie plays up the sense of grief of a woman still dealing with the loss of her daughter where she is seeking answers for her grief as well as believing that their daughter is warning them about something. Sutherland provides a performance that is based on man accepting what had happened yet is dealing with all of these strange things he is seeing as well as the fact that he might be repressing something about himself. Christie and Sutherland together are a joy to watch as they play up to their loss and need for each other but also deal with the fact that they lost a child and haven’t really done much to confront that loss.

Don’t Look Now is a tremendous film from Nicolas Roeg that features great performances from Julie Christie and Donald Sutherland. Along with its ensemble cast, entrancing visuals, eerie music score, and chilling setting, it’s a film that play into the ideas of grief as well as mysterious events that link to loss. Even as it’s a film that isn’t a conventional horror film but rather a suspense-drama that has elements of horror to showcase a couple’s encounter with grief. In the end, Don’t Look Now is a magnificent film from Nicolas Roeg.

I think this is one of the films they talked about on IFC's Indie Sex documentary. I've never seen it aside from those clips, but it sounds very interesting.

@Brittani-It's not a traditional horror film but rather a study of loss. That sex scene is notorious as legend has it that Julie Christie and Donald Sutherland really did have sex on set and it actually really pissed off Christie's then-boyfriend Warren Beatty.

Such an atmospheric movie. Venice looks so eerie in it. I love the build up of ambience and the way that loss figures heavily into it.

@vinnie-Agreed. It is an incredible film and I'm so glad I bought a DVD copy of the film so I could watch it again one of these days.