For the 42nd week of 2018 as part of Wandering Through the Shelves' Thursday Movie Picks series hosted by Wanderer. It’s the third week of the 2018 Halloween edition as the theme is on technology as it often produces some kind of trouble whenever it had a certain amount of promise yet it proves that it’s just a bad idea. Here are my three picks all from the mind of another horror great in David Cronenberg:

A remake of the 1958 film version by Kurt Neumann that was adapted from George Langelaan’s short story is about what happens when a man tries to create a teleporting machine where a fly ends up being in the same teleporter and all things go wrong. Featuring an incredible performance from Jeff Goldblum as the scientist who creates the machine for the hope of the good of the world only to be fucked over by a housefly. Even as he’s engaging into a romance with a journalist as it goes horribly wrong as there’s just moments in the film that is fucked up for all of the good reasons including a nightmare sequence that features Cronenberg in a cameo. 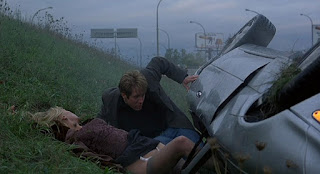 Cars are used to get people from one place to another but what happens when a small group of people decide to use them as car crashes to fulfill their sexual desires? From J.G. Ballard’s novel is the story of a couple who tries to spark up their own sexual desires as they meet a group of people who are turned on by car crashes as it goes into areas that is fucking bonkers. It’s a film that is definitely not for everyone as it does push the boundaries of what is obscene and what is acceptable as it’s definitely a film that Millennials will hate. 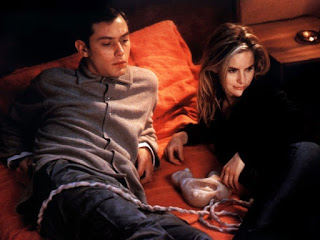 Set in the world of video games, the film is a multi-layered story about a game designer who is sought on by assassins who believe her game is trying to ruin the world as she is aided by a young security guard who is trying to protect her. It’s an odd film that blur the idea of fiction and reality yet it shows what games could do to connect with people for better or worse as it does have this conflict between people who want to live in the fantasy world and those wanting to live in the real world. It’s one of Cronenberg’s more underrated films as it was also ahead of its time in terms of what it would do with the world of video games as well as play into the idea of dreams and fantasy layered upon each other.

I still want to see The Fly but I have seen the original in which the ending freaked me out. ...I hate spiders. I’ve seen Crash and consider it ....horrible. I hated this film and a group of us watching it were laughing and groaning. I have yet to see Existenz but will give it a shot...Cronenburg is different.

The Fly is a great choice, it didn't occur to me but it fits so well. Part of what makes it so good is the spot on casting of Jeff Goldblum, he's not only excellent in the role but his lanky physicality is suggestive of a fly which just adds an extra layer. Geena Davis and he have a great chemistry, I know they were happily married at the time but that doesn't always translate to the screen.

I couldn't get into Crash, it was just too to for me. I haven't seen the last. I've intended to but it's not high on my list so it get pushed back.

I really expected this to be tougher to come up with choices than it proved to be fortunately.

Frankenstein (1931)-Dr. Henry Frankenstein (Colin Clive) of whom it might be generously said has a screw or two loose attempts with the latest technology to create life by assembling a creature from body parts of the dead in his laboratory deep within the walls of his remote castle. Assisted by the loyal, deformed Fritz (Dwight Frye), he succeeds in bringing his monster (Boris Karloff) to life in florid fashion. However, trouble is brewing when the confused and traumatized monster escapes into the countryside and begins to wreak havoc. Iconic and seminal film impressively director by James Whale, with a touching performance by Karloff, set the standard for all horror movies to follow.

Demon Seed (1977)-Susan Harris (Julie Christie) and her husband Dr. Alex Harris (Fritz Weaver) a renowned scientist live in a home he has modified to be run by voice-activated computers. Dr. Harris has also developed Proteus IV, an extremely advanced and autonomous artificial intelligence program. When Harris becomes disturbed by Proteus’s demands to be let "out of this box". Harris switches off the communications link but Proteus restarts itself, constructs a robot takes control of the house and traps Susan inside. Object: impregnate Susan to assume human form. Strange, unsettling sci-fi based on a Dean Koontz novel is strengthened by having a talent like Julie Christie in the lead.

Tron (1982)-Young computer engineer Kevin Flynn (Jeff Bridges) discovers that his work is being stolen by one of his company’s executives-Ed Dillinger (David Warner). He attempts to hack the system but something goes awry and Flynn is transported into the digital world, facing off against Dillinger's computerized likeness, Sark, and the imposing Master Control Program. Aided by Tron (Bruce Boxleitner) and Yori (Cindy Morgan), Flynn fights a technological battle for control. Though the graphics are wildly dated now they were cutting edge when this was released.

Love your theme within a theme. I need to see all of these.

Although The Fly is the only I've seen of these, I love that you went with three Cronenberg films and I hope I get to see Crash and Existenz soon.

The Fly is amazing. Great choice! Haven't seen the other two, but I do really want to see Crash as I've heard some rather interesting things about it.

Cronenberg is amazing as a director. He knows how to really unsettle.

@Birgit-Many people didn't like Crash. It's Cronenberg as his most extreme and I love him for it.

@joel65913-I was supposed to watch Demon Seed but it never came on TCM. Boo!

@Brittani-These films are Cronenberg at his best.

@Sonia-eXistenZ is a lot of fun while Crash might be a little intense.

@Wendell-If you're into car crashes and people getting turned on for that shit, then that's the film for you.