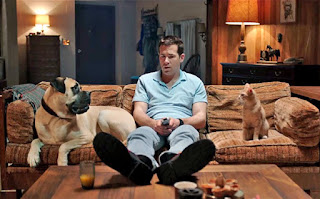 Directed by Marjane Satrapi and written by Michael R. Perry, The Voices is the story of a mentally-ill factory worker who lives with a cat and a dog as the former wants him to kill while the latter is trying to make him feel normal. The film is an offbeat horror-comedy that plays into a man coping with his illness just as he is trying to maintain a normal life. Starring Ryan Reynolds, Gemma Arterton, Anna Kendrick, Ella Smith, and Jacki Weaver. The Voices is a chilling yet offbeat film from Marjane Satrapi.

The film revolves around a young man who lives in an apartment above a bowling alley as he falls for a British co-worker at a factory where he asks her out on a date only for things to go wrong due to conversations he has with his dog and cat. It’s a film that is really the exploration of a man who is mentally ill as he’s haunted by childhood memories where he tries to live a normal life in working at a factory in creating bathtubs while he would have frequent visits to a shrink who is making sure he’s taking his medication. Michael R. Perry’s screenplay is straightforward in its narrative as it play into the world that Jerry Hickfang (Ryan Reynolds) lives in as he shares an apartment with his dog Bosco and cat Mr. Whiskers as the former supports Jerry’s desire to fit in and be normal but the latter wants Jerry to kill.

When Jerry befriends the British co-worker Fiona (Gemma Arterton) and sets up a date, he thinks things are going to go well but Fiona unfortunately stood him up to go drinking and do karaoke with other co-workers though she didn’t mean to cancel the date as they later meet as she asks for a ride home where things go wrong. Due to the medication he’s given by his psychiatrist in Dr. Warren (Jacki Weaver), it’s meant to draw out the voices in his head but it would unfortunately have him face reality as well as the memories he had about his childhood. When he doesn’t take his medication, he would have conversations with Bosco and Mr. Whiskers while he sees things that don’t play into the grim ideas of reality even though it would re-emerge every once in a while just as he would befriend another co-worker in Lisa (Anna Kendrick).

Marjane Satrapi’s direction is filled with a lot of quirks but also some striking visuals in the way she portrays small-town American life. Shot largely on location near Berlin, Germany, Satrapi uses the small town locations and woods to play into a world that is sort of isolated from everything else where there is a lot happening but there are also places that have been abandoned such as the bowling alley that Jerry lives above. While Satrapi would use wide shots of the locations including parts of Jerry’s apartment, she does create some unique compositions that play into this element of surrealism with the usage of close-ups and medium shots. Notably in these scenes where Bosco and Mr. Whiskers would talk to Jerry and converse with him as well as a few individuals he would meet and would have these strange conversations with. There is an element of black comedy into what is happening as Satrapi’s scenes showed what Jerry sees in his apartment when he’s not his medications while everyone else would see something very different and disturbing.

Satrapi also play into the film’s flashback scenes to get an understanding of Jerry’s troubled past during its second act where Jerry takes Lisa to his old family home where he plans to do something but bad memories would prevent it. It’s a key moment in the film that would play into Jerry’s mental illness as it is clear he’s getting worse as the ideas of reality and fantasy become blurry as he couldn’t handle the former and what he will face. Even as suspicion would occur over what he does when he’s not at work though it is clear that he’s a man in need of help where Satrapi does emphasize on Jerry’s mental illness as he is someone who unfortunately does bad things even though he doesn’t mean to. Overall, Satrapi crafts a weird yet exhilarating film about a mentally-ill young man who is urged by his cat to kill people.

Cinematographer Maxime Alexandre does brilliant work with the film’s cinematography in creating a usage of heightened colors and lighting for some of the interiors in Jerry’s home to express his idea of fantasy while using more dreary colors to play into the reality that he doesn’t want to face as it would include in some of the film’s exterior shots. Editor Stephanie Roche does excellent work with the editing as it is straightforward with some rhythmic cuts towards some of the film’s suspense and humor. Production designer Udo Kramer, with set decorator Karin Betzler and art director Stefan Hauck, does amazing work with the look of the factory that Jerry works as well as his home in how it looks from his view and how it looks from the view of everyone else. Costume designer Bettina Helmi does fantastic work with the costumes with the look of the factory jumpsuits as well as the clothes that the women wear.

Prosthetic makeup designers Tamar Aviv and Jorn Seifert do superb work with the look of some of the makeup effects that is needed for some of the film’s dark violent moments. Special effects supervisor Uli Nefzer, along with visual effects supervisors Manfred Buttner, Antoine Marbach, and Damien Stumpf, does terrific work with the movements of the animals talking as well as some fantasy scenes from the view of Jerry. Sound designer Christian Conrad does incredible work with the sound as it help play into the atmosphere of the locations as well as some of the sound collages into the things that Jerry hears. The film’s music by Olivier Bernet is wonderful for its music score that feature a few ambient pieces for the playful moments along with orchestral pieces for the suspenseful moments while music supervisor Robin Urdang provide a playful soundtrack of music from Olivier Bernet with Jean Francois Gregoire and the O-Jays.

The casting by Venus Kanani and Mary Vernieu is marvelous as it include some notable small roles from Stephanie Vogt as a news reporter, Valerie Koch as Jerry’s mother in the flashbacks, Paul Brightwell as Jerry’s cruel stepfather in the flashbacks, Gulliver McGrath as the young Jerry, Stanley Townshend as the local sheriff, Paul Chahidi as Jerry’s supervisor, Sam Spruell and Adi Shankar as a couple of co-workers who helped organize a company party, and Ella Smith in a terrific role as Alison as a factory numbers worker who becomes suspicious about Jerry’s behavior and the disappearances in the town. Jacki Weaver is excellent as Dr. Warren as Jerry’s psychiatrist who is trying to understand what he’s feeling while knowing that he’s not been taking his medication prompting her to be concerned about his well-being and his treatment for his illness.

Gemma Arterton is brilliant as Fiona as a British office worker at the factory who befriends Jerry though she didn’t mean to stand him up on their date where she is someone that is flawed although is still a decent person. Anna Kendrick is amazing as Lisa as an office worker in the factory who later goes out with Jerry as she would discover aspects of Jerry’s past but also a disturbing discovery. Finally, there’s Ryan Reynolds in a phenomenal performance as Jerry Hickfang as a well-meaning but troubled factory worker who is mentally-ill as he hears voices where he tries to fit in but finds himself in places that makes him unhinged as Reynolds sells that air of innocence and anguish while he also does the voices of Bosco in an old-man accent and Mr. Whiskers in Scottish accent as they are hilarious in what they say.

The Voices is a sensational film from Marjane Satrapi that features an incredible performance from Ryan Reynolds. Along with its offbeat premise, study of mental illness and childhood trauma, gorgeous visuals, and a top-notch ensemble cast. It’s a film that explores a man dealing with his illness as well as the need to connect where he ends up doing some bad things and try to cope with it. In the end, The Voices is a remarkable film from Marjane Satrapi.

I've been playing games with this film. By that I mean, I've been all set to watch it at least half a dozen times, but always wound up picking something else at the last minute. I need to just go ahead and do it.

@Wendell-The mental illness aspect of the film is serious but it's mainly a humorous film as you go with the black comedy aspects of the film. It's nothing overtly serious.

I've that about it. It just always seems that I find something I want to see a little bit more at the moment.