For the 43rd week of 2018 as part of Wandering Through the Shelves' Thursday Movie Picks series hosted by Wanderer. The fourth and final week of the Halloween edition is based on weird TV series as some shows defy description and some just are there just to fuck with people’s minds. Here are my three picks:

From David Lynch and Mark Frost comes a show that basically changed television for a brief moment in time. It all revolves around the murder of a young woman whom a small town in the Pacific Northwest knows and many wondered who killed Laura Palmer. It was a show that had a dream-like quality but also made fun of soap operas as well as showcasing weird elements. Though the show went into a strange turn following the unveiling of Palmer’s killer during its second and final season. It would return in style in 2017 in a revival (which I haven’t caught up with yet) that brought the show back to its old glory. 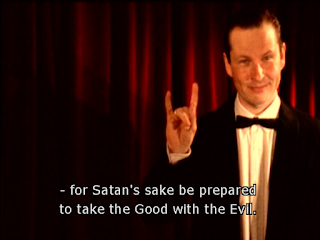 From Lars von Trier and collaborator Morten Arnfred is a miniseries set in a Danish hospital that was built on top of a mysterious marsh that is supposedly haunted as a lot of strange shit is happening. It’s a mixture of dark humor, horror, hospital dramas, and other genres as it has this air of excitement and weirdness that includes a Swedish doctor angry about working at a Danish hospital as he hates the Danish while there’s dishwashers with Downs syndrome who converses with ghosts. It’s a miniseries that lasted for two series in 1994 and 1997 with a third one planned but its star Ernst-Hugo Jaregard died in 1998 as well as several other actors in the following years preventing a third series from happening. Yet, the miniseries would later get an American remake in Kingdom Hospital by Stephen King in 2004 that only lasted a season.

Produced by Tony and Ridley Scott is a horror season from Canada that lasted two seasons yet does have a cult following as it’s sort of based on a film made by the former back in 1983. The show is essentially an anthology series filled with different stories of horror ranging from all sorts of ideas helmed by different filmmakers including Tony Scott, his son Luke, Russell Mulcahy, and many others as it often tell stories of obsession and desire with elements of softcore porn. The first season was hosted by Terence Stamp while the second season was hosted by David Bowie who starred in the 1983 film and appears in the second season’s first episode.

I haven't seen any of your picks this week, though Twin Peaks is something I'd like to watch eventually.

I tried watching Twin Peaks when it first came out and just never got into it. I haven’t seen the other 2. It would like to see the last one

I'm another who hasn't seen any of these. David Lynch just isn't my thing, so I probably won't see Twin Peaks.

I tried watching Twin Peaks the first season, I think I got as far as 2 to 3 episode. I think the weird stuff had yet to happen, but it was so boring I just could not watch any further.

@Brittani-Twin Peaks I think is still available though I'm sure about the other 2 shows.

@Birgit-The Hunger is hard to find as it didn't last very long despite the people they were able to get.

@Wendell-David Lynch isn't for everyone but that's OK.

@Wanderer-Well, it starts off as a mystery-drama but it gets weird as it goes on. The entire first season is a must. I've only made it part-way through the second season but I heard after unveiling Laura Palmer's killer, it goes downhill from there.