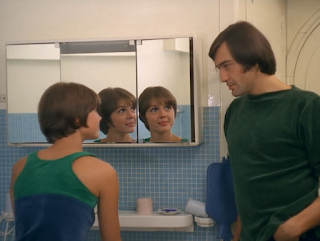 Directed by Eric Rohmer and written by Rohmer, Patrick Bauchau, Haydee Politoff, and Daniel Pommereulle, La collectionneuse (The Collector) is the story of an art-dealer and a painter whose holiday in the French countryside is disrupted by a Bohemian woman who is notorious for being a collector of men. The fourth film (third in its release) in a thematic series of films relating to morality known as Six Moral Tales, the film is the study of three people trying to enjoy themselves with one of them creating chaos during this time of relaxation. Starring Patrick Bauchau, Haydee Politoff, and Daniel Pommereulle. La collectionneuse is a ravishing and somber film from Eric Rohmer.

Set in the countryside near the South of France, an art-dealer and his painter friend both choose to spend the summer on a holiday at the home of a friend who is out of town only to learn that a young Bohemian woman is also staying there. It’s a film with a simple premise that is told in a loose style as it’s mainly told from the perspective of the art-dealer Adrien (Patrick Bauchau) who laments over a break-up with his fiancée as he uses the vacation to escape from heartbreak but also focus on work.

The film’s screenplay by Rohmer and his three lead actors in Bauchau, Haydee Politoff, and Daniel Pommereulle as they would write their own dialogue play into this idea of escape as Haydee (Haydee Politoff) is a young woman who knows the owner as she had slept with him where she is known for bedding many men as if she’s a collector. While Adrien is interested in Haydee though he prefers to observe her, it is the painter Daniel (Daniel Pommereulle) that would sleep with her although their relationship wouldn’t last as Haydee becomes intrigued by Adrien who starts to raise questions about having a relationship with her.

Rohmer’s direction is low-key in its simplicity while creating some gorgeous compositions to play into the characters and the environment they’re in. Shot on location near St. Tropez in the South of France, Rohmer’s direction does use wide shots to get a scope of the locations including the town near the countryside home as it plays into a world that is vibrant and stylish that is a sharp contrast to something that is quieter and naturalistic at the house and its nearby beach. Yet, Rohmer aims for simple compositions though there aren’t a lot of close-ups where it’s more about a simple medium or medium-wide shot to play into the characters being in a frame or in a room. It adds to this sexual tension though there aren’t any sex scenes or any nudity that occur but rather through sound and the aftermath of sex.

Rohmer would also maintain this air of dramatic tension and intrigue throughout the film since it is largely told from Adrien’s perspective. Even as Rohmer would have the camera linger around him as it play into his surroundings as well as observing Haydee’s time with other men including Daniel. Adrien does get tempted to be with Haydee as they would kiss from time to time yet it never goes all the way once the film reaches its third act where an antiques collector named Sam (Seymour Hertzberg) would take an interest in Haydee. It would be a moment of moral confusion for Adrien as it relates to Haydee as he copes with his fondness for her but also come into question if he’s just another collection to her conquests or something more. Overall, Rohmer crafts an intoxicating and fascinating film about two men spending the holiday at the south of France with a mysterious young woman.

Cinematographer Nestor Almendros does incredible work with the film’s cinematography with its usage of naturalistic lighting for many of its daytime interior/exterior scenes as well as the usage of available light for the scenes set at night. Editor Jacquie Raynal does nice work with the editing as it is largely straightforward to play into the drama and some of the tension that occur between its main characters. The film’s music by Blossom Toes and Giorgio Gomelsky is fantastic as it’s largely low-key as it plays in the background of a radio or to play into some of the drama involving Adrien and Haydee.

The film’s terrific cast include a few notable small roles from Dennis Berry as a young conquest of Haydee in Charlie, Mijanou Bardot as Adrien’s fiancée Carole, Annik Morice as a friend of Carole in the film’s prologue, Alain Jouffoy as a writer Daniel meets with early in the film in its prologue, and Seymour Hertzberg as the antiques collector Sam who becomes fascinated by Haydee. Daniel Pommereulle is excellent as the artist Daniel as a man who is hoping to have some fun where he would engage in an affair with Haydee only to lose interest and treat her terribly. Haydee Politoff is brilliant as Haydee as a young Bohemian woman who travels from place to place as well as engage in sexual affairs with men as she becomes fascinated by both Daniel and Adrien with the latter being a challenge but also gain some life experience for her. Finally, there’s Patrick Bauchau in an amazing performance as Adrien as an arts dealer dealing with heartbreak as well as Haydee’s presence where he’s intrigued by her but copes with the moral implications of being one of her conquests as well as the desire to be something more.

La collectionneuse is a remarkable film from Eric Rohmer. Featuring a great cast, gorgeous photography by Nestor Almendros, amazing locations, and themes of temptation and conquests. It’s a film that explores two men and a young woman living at a countryside home where there’s a lot to be expected with one of the men raising questions about this young woman’s lifestyle choice. In the end, La collectionneuse is a marvelous film from Eric Rohmer.

This sounds like something I'd enjoy. I always get so many foreign film suggestions from your space.

It's part of a film series that Eric Rohmer did in the 1960s and early 70s as I'm now 2/3s done with the series plus I'm doing a re-watch of another film of his and another film of his I haven't seen. He's not for everyone as many of his films don't have much of a plot as it's more about characters dealing with their surroundings and their own morality.