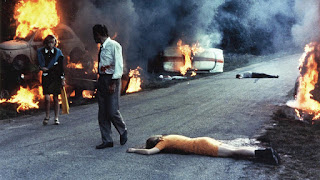 Based on the short story Le autopista del Sur by Julio Cortazar, Weekend is the story of a bourgeoisie couple who travel to France to collect an inheritance as they encounter a world where everything is falling apart. Written for the screen and directed by Jean-Luc Godard, the film is an exploration of two people with secrets from each other as they’re forced to see a world that is in total chaos as it would mark the end of a style of storytelling for Godard for more than a decade as it plays into his interest towards political and social matters. Starring Mireille Darc, Jean Yanne, Georges Staquet, Juliet Berto, Jean Eustache, Jean-Pierre Leaud, and Yves Afonso. Weekend is a chilling yet abstract film from Jean-Luc Godard.

A trip through the French countryside for a bourgeoisie couple becomes a nightmare due to a world that has gone to shit. That is the film’s overall premise as it explores the idea of what happens when society and morality have all fallen by the wayside just as a couple go on a trip to collect an inheritance with each having their own intentions for themselves. Jean-Luc Godard’s screenplay does have a traditional narrative structure yet it is told in an abstract style as it breaks down the fourth wall at times but also would blur the idea of fantasy and reality along with elements of surrealism as the couple would meet real-life figures in literature, history, or in politics. It all play into a world that is coming apart as this couple in Corrine (Mireille Darc) and Roland (Jean Yanne) are trying to understand what is happening yet are desperate to reach their destination that becomes more troublesome as they have to endure the chaos around them including traffic jams, deaths, and people angry at the world.

Godard’s direction is definitely stylish in its offbeat approach yet it is filled with some haunting visuals that play into this idea of a world coming undone. Shot on various locations in France, Godard captures a world that is outside of Paris that is full of wonders where he shoots a Corrine and Roland both at their apartment as Roland is driving his car recklessly with no regards for anyone. There are some long shots that occur throughout the film whether it’s in a wide and medium shot or in a close-up where Godard would have characters talk about what is going on around them or a historical figure pop up and say something that has some relevance to the chaos that is happening in France during the 1960s that would have these dire premonitions of what was to come in May of 1968. Even as Corrine and Roland find themselves unable to get a ride to town after their car had crashed at the beginning of its second act due to political affiliations.

Godard’s direction would include these long and gazing dolly-tracking shots for the film’s traffic jam scene in the film’s first act as it shows Roland Corrine trying to get through this road of death, destruction, absurdity, and confusion. The tracking shots definitely capture a lot of coverage while they would be briefly interrupted by jump-cuts of title cards that would also include a scene of a camera going slowly in circle for a music break. It is Godard breaking away from the confines of traditional narrative while following this bourgeoisie couple who are traveling to receive an inheritance as the third act is about them reaching their destination and an aftermath that is more troubling as it relates to their secrets from one another but also this inhumanity they had endured throughout their journey where they end up encountering a guerilla task force. It would play into the conflict involving social classes as well as this growing civil disobedience over what the world has become. Overall, Godard crafts a provocative and unsettling film about a bourgeois couple’s trek through France where they encounter a world that has completely lost its purpose.

Cinematographer Raoul Coutard does brilliant work with the film’s gorgeous cinematography that captures the vibrancy of the colors in the clothes that Corinne and other characters wear as well as the look of the locations that showcase a world that is coming undone. Editor Agnes Guillemot does amazing work with the editing as it is playful with its usage of jump-cuts but also its usage of repetition and montages to play into this sense of remorse or lack of it. The sound work of Rene Levert and Antoine Bonfanti is excellent for its approach to sound in the way car horns, trucks, guns, and everything would sound from afar or up close as it help add to the film tense atmosphere of the film. The film’s music by Antoine Duhamel is fantastic for its offbeat musical score that ranges from somber orchestral pieces as well as a disconcerting drum-based piece that is actually played on location while the film also feature elements of classical music.

The film’s superb cast feature some notable small roles and appearances from filmmaker Jean Eustache as a hitchhiker, Omar Blondin Diop and Laszlo Szabo as a couple of garbage men who both have something to say about the state of the world for Africa and Algeria, Ernest Menzer as a FLSO cook, Michelle Breton as the assistant cook, Jean-Pierre Kaflon as the leader of a guerilla faction known as the FLSO, Valerie Lagrange as the leader’s lover, Paul Gegauff as a pianist performing classical music for the music break sequence, Anne Wiazemsky and Michel Cournot as a couple of barnyard passerby with Wiazemsky also playing a guide, Georges Staquet as a tractor operator who argues with Roland, and Jean-Claude Guilbert as a vagabond who fights with Roland. Jean-Pierre Leaud is terrific in a dual role as the French Revolution leader Louis Antoine Leon de Saint-Just and as a man on a telephone who tries to stop Roland and Corrine from stealing his car.

Yves Afonso is fantastic as the literary character Tom Thumb who comments about the state of the world while Blandine Jensen is excellent in a dual role as the author Emily Bronte who never gives any straight answers and as a piano accompanist for the pianist. Juliet Berto is brilliant in a dual role as a fellow bourgeoisie that Roland and Corrine encounter and as a FLSO fighter. Finally, there’s the duo of Mireille Darc and Jean Yanne in great performances in their respective roles as Corinne and Roland Durand as this bourgeois couple traveling through France to collect an inheritance for Corinne as she is someone eager to get money for her own reasons while dealing with the chaos around her. Yanne’s performance as Roland is a man who is manic and impulsive with little regard for anyone due to his reckless driving and nonchalant attitude towards others where he and Darc both display this air of inhumanity as two people with ulterior motives for each other as well as become lost in a world that is far crueler than they are.

Weekend is a spectacular film from Jean-Luc Godard. Featuring a great cast, gorgeous visuals, an abstract narrative, and themes of a world becoming undone by class conflicts, social issues, popular culture, and the sins of the Western Civilization. It’s a film that is definitely confrontational but also unafraid in being absurd and offbeat as it is definitely one of Godard’s quintessential films as well as a fitting end to his widely-revered French New Wave period. In the end, Weekend is a phenomenal film from Jean-Luc Godard.

I just watched a different film Called Weekend recently but I haven't seen this one. As always, there's so many of these I need to see.

@Brittani-I saw on your Twitter scroll as the film you saw by Andrew Haigh which is a great film. Yes, this is a must if you are interested in the period of the French New Wave though it is an abstract film that play into the idea of narrative as it did mark an end for Godard in narrative-based filmmaking for a time in relation to what was happening politically and socially in France and what was to come in the year after its release.

Great review of a Godard classic. You've really been digging into some good ones. This is a film I've been really wanting to revisit.

@keith71_98-Merci. It is an incredible film as I'm glad to have purchased the DVD of the film as I can see again at any time. Now there's only 2 more Godard feature-length films from the New Wave period and then I'll just want and see where to go next.

A controversial film as you say. The number of accidents seems extreme(kind of like a war zone), but there is a point with it. Perhaps that we are in too much of a hurry in our contemporary society, and therefore are a danger to ourselves and those around us. The second half with all the long monologues I found pretty boring. The first half was stronger.

@Chris-I agree with you on the first half though I actually didn't mind the monologues in the second half since it does provide commentary of what is to come as well as play into the absurdity of these revolutions and social conflicts.