Thursday Movie Picks: Films You Thought You Would Hate But End Up Enjoying

For the 11th week of 2019 as part of Wandering Through the Shelves' Thursday Movie Picks. We venture into the subject of films you thought you would hate but ended up enjoying as it’s often common with a lot of people who watch films a lot. We hear about a film or see something that feels typical of a film from a certain genre and it looks like every other film but then it would surprise you as those are the films worth watching. Here are my three picks of films I thought I would hate but ended up enjoying it.

I had a lot of reservations about this film as I wasn’t keen on seeing the film but after hearing what so many people had said about the film and all of the reviews it was getting. I ended up watching the film in a double-feature with The Hunger Games as that was a good film and then I saw this film based on the TV show. What I didn’t expect was that it would be this outlandish comedy but a film that ended up making me laugh more than once and it made laugh so goddamn hard that there’s still parts of that film that doesn’t fail to make me laugh. It was the film that made me realize that Channing Tatum is for real and that Jonah Hill does have a lot more to offer while I would applaud Tatum for saying what needed to be said about Glee. “Fuck you Glee!”

Mainstream horror films are hit-miss with me as a lot of it are misses as I was also skeptical about this film as it looked like every other horror film or horror comedy shown. Yet, it surprised me for all of the right reasons and why I think it’s a film that gets it right about what horror-comedies should be. It’s about a college student who gets killed and then suddenly wakes up re-living the same day where she tries to find her killer and end this time loop she’s in. It’s a film that doesn’t take itself seriously while not being afraid of acknowledging the fact that it references Groundhog Day as it proves that films can be fun and smart while not afraid to borrow or acknowledge its influences.

3. Backstreet Boys: Show ‘Em What You’re Made of 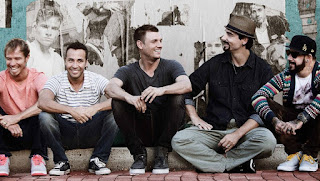 If you were to tell me 20 years ago as a high school senior that was waiting for the new Nine Inch Nails album and was more into rock than the pop music of the day that I would be singing along to the Backstreet Boys. I would be like “you’ve got to be fucking kidding me that I would listen to that pussy bullshit music!” Well, considering that today’s music is just almost un-listenable and I’ve already accepted the fact that I will not get with the times. I saw this film on TV late one night as I was engaged by it as it’s a documentary film about the boy band reuniting with one of their members for the 20th anniversary tour and a new album as they talk about their history, worldwide success, and failures. I would’ve expected the documentary to be like a typical episode of Behind the Music but once I saw the five members argue with each other and get personal with one another. That’s when I knew that this was a different ballgame and I appreciate the fact that they were willing to show them at moments when they were being dicks. It was a surprise for me that I can recommend as someone that isn’t the typical audience for a group like the Backstreet Boys who are still making damn good music and with fans who are fucking loyal as I have respect for them too.

I love 21 Jump Street so much! I hoped it would be a good movie but when it comes to comedies there's always the fear that the only funny parts are all in the trailer but it wasn't the case this time. I forgot about the line about Glee, haha!

I don't think I ever saw that Backstreet film (I was more of an Nsync girl) but I agree with you on the other two! I'm kind of kicking myself for not thinking of Happy Death Day.

I guess I ought to check out Happy Death Day one of these days, even though I avoided it because of the Groundhog Day similarity. Sounds better than I first thought.

Ok...I haven’t seen any of these but you are the second one to chose Happy Death Day and I have not yet visited everyone. I might see it since it looks like it would be funny not just a horror. By the way, the mask in that film looks like an evil Thomas The Train. I can’t stand Jonah Hill but I might give this movie a watch since I like Channing Tatum. I was into the Beatles, ELO and ABBA and loved the 80’s music so the boy bands were lost to me but I wouldn’t mind seeing this film.

Not that I exepected to hate it, still 21 Jump Street surprised me by how funny it was and how much I ended up liking it.

@Allie Adkins-When Channing Tatum said "Fuck you Glee", I was like "I hear you baby, loud and clear". It got some applause because that show is fucking shit. I didn't think it would be good. It ended up being so much better with a sequel that was just as funny.

@Brittani-I too am more of a 'Nsync fan than a BSB fan (the 18-19 year old in me would say awful things to me about this). It's just good pop music. Better than today's bullshit. Happy Death Day is just one of those surprises

@Chris-It knows its being un-original yet it manages to be so fun and play with the tropes of the genre.

@Birgit-Happy Death Day is not one of these gory horror films that is so prevalent as it's more humorous as well as feature characters you care about. I wasn't into boy bands back then but now I have an appreciation for both BSB and 'Nsync as they did make good music. Especially if you compare it to today's music which is just un-listenable.

@Wanderer-When a film manages to make you laugh so fucking hard and does a lot more to entertain you. That's when you know the film is working.