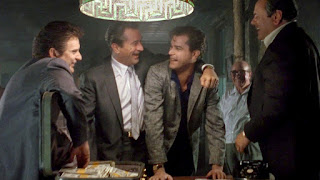 Based on the book Wiseguy by Nicholas Pileggi, Goodfellas is the story of mob associate Henry Hill who is part of a crew as they would rise high and later fall low once he gets himself in trouble and become a target by his own crew. Directed by Martin Scorsese and screenplay by Scorsese and Pileggi, the film is a dramatization of Hill’s life as he lived a life of luxury as part of the mob while watching his world fall apart through his own faults and everything else as he is portrayed by Ray Liotta. Also starring Robert de Niro, Joe Pesci, Lorraine Bracco, and Paul Sorvino. Goodfellas is an exhilarating and wild film from Martin Scorsese.

Spanning nearly three decades, the film follows the life of a young man who becomes an associate for a mob boss doing small things and later rising up the ranks as a wise guy where he gets involved with a lot of things and live a nice life only to fall big through his own faults and other activities. It’s a film with a simple rise-and-fall scenario from screenwriters Martin Scorsese and Nicholas Pileggi where Henry Hill was this teenager who is fascinated by the local mob in his neighborhood as he offers to help them and manages to win their respect and trust. The script is largely told from Hill’s perspective as he worked for the mob boss Paulie Cicero (Paul Sorvino) and later befriends a truck hijacker in Jimmy Conway (Robert de Niro) and a fellow juvenile delinquent in Tommy DeVito (Joe Pesci). The first act is about Hill’s young life as he would befriend Cicero and become part of his crew doing small favors and such where he would meet Conway and DeVito. It is also the moment he meets Karen (Lorraine Bracco) would become his wife as she would also have some voice-over narration as it relates to her experience being the wife of a wise guy.

The film’s second act begins in 1970 as it relates to a violent encounter with the Gambino family member Billy Batts (Frank Vincent) over an insult he made towards DeVito. It would lead to all sorts of things relating to Hill’s own affairs with other women, a brief incarceration in prison during the 70s, the Lufthansa vault heist that was organized by Morrie Kessler (Chuck Low), and drugs. It all play into this lifestyle of getting whatever you want and be given special privileges that allow them to get away with what they want but also manage to get some things in prison that would make their stay more comfortable. The second act both begins and ends with a major death as it would lead to this third act that is the fall of Hill and his friends. Notably as it play into the severity of Hill’s drug problems and other aspects in the business that would eventually get him in trouble.

Martin Scorsese’s direction definitely has a flair for style from the opening credits sequence designed by Saul Bass as well as the way the film opens with Hill, Conway, and DeVito driving onto a highway as they hear something bumping in the trunk as it would relate to an incident during the film’s second act. Much of the film is shot on various locations in New York, New Jersey, and parts of Long Island in New York as it play into this culture of Italian-Americans, Irish-Americans, and Jewish-Italian Americans who are part of this world that is working-class but these wise guys live a life that can get them whatever they want. There are some wide shots that Scorsese would use to get a scope of the locations yet much of his direction emphasizes on close-ups and medium shots. Even as Scorsese would use these intricate tracking shots to play into some locations such as a nightclub along with some stylistic shots that play into the violence and drama. Scorsese also infuse elements of humor as it relates to DeVito and the stories he tells as well as his own violent outbursts after he shoots someone who wouldn’t take shit from him.

The Billy Batts scene is one filled with dark humor and some confrontational dialogue that would be followed by a comical moment at the home of DeVito’s mother (Catherine Scorsese) as she, her son, Conway, and Hill eat breakfast as it play into Scorsese’s offbeat tone as Scorsese would focus some attention on the car knowing something is up. The scenes of decadence and excess are heightened that includes this fiery sequence early in the third act where Hill’s cocaine addiction finally catches up with him as he believes someone is watching him with shots of helicopters and all sorts of things. Scorsese also play into this sense of drama that looms during the third act as well as some moments late in the second act that relates to Lufthansa and the players involved where there is a melancholia that would be prominent into its third act and what happens in the end. Overall, Scorsese creates a riveting yet outrageous film about the life of a mob hood and the craziness he endures as part of a crew.

Cinematographer Michael Ballhaus does brilliant work with the film’s cinematography where Ballhaus maintains a straightforward look for many of the daytime exterior scenes along with some stylish lights for some scenes set at night. Editor Thelma Schoonmaker does incredible work with the editing with its stylish usage of freeze-frames, slow-motion shots, jump-cuts, and other stylistic editing techniques as it help play into the action and suspense as it is one of the film’s major highlights. Production designer Kristi Zea, with set decorator Leslie Bloom and art director Maher Ahmad, does excellent work with the look of the homes that Hill lived in as well as the homes of friends and the places he, Conway, and DeVito go to as well as the prison cell he and Cicero shared.

Costume designer Richard Bruno does fantastic work with the costumes from the stylish suits the men wear as well as the clothes and fur coats the women wear to play into the evolving period of the times. Sound editor Skip Lievsay does amazing work with the sound in the way sound effects are presented as well as gunfire, the atmosphere of a club or a restaurant, and other textures as it play into the suspense and drama as it’s a highlight of the film. The film’s tremendous music soundtrack is a highlight of the film as it help play into the evolving period of the times as well as some of the craziness that occurs as it features contributions from Tony Bennett, the Moonglows, the Cadillacs, Billy Ward and His Dominoes, the Chantels, the Harptones, Otis Williams and the Charms, Mina, Johnny Mathis, Aretha Franklin, Bobby Darin, the Rolling Stones, Harry Nilsson, Derek and the Dominos, Muddy Waters, Cream, the Shangri-Las, Bobby Vinton, Betty Curtis, the Crystals, Dean Martin, Donovan, the Who, George Harrison, and Sid Vicious.

The casting by Ellen Lewis is great as it feature some notable small roles and appearances from Tony Sirico as a member of Cicero’s gang in Tony Stacks, Michael Imperioli as a young man handing out drinks during a poker game in Spider, Mike Starr as a trucker friend of Conway in Frenchy, Frank Sivero as an associate of Conway in Frankie Carbone, Samuel L. Jackson as a musician/trucker named Stacks who was part of the Lufthansa heist, Catherine Scorsese as DeVito’s mother, Charles Scorsese as one of Cicero’s cellmates in Vinnie who likes to put a lot of onions in the tomato sauce, Gina Mastrogiacomo as one of Hill’s mistresses in Janice Rossi, Welker White as the Hills’ babysitter Lois who also does drug deal for them, Debi Mazar as another of Hill’s mistress in Sandy who would help him with the cocaine, Illeana Douglas as a mob girlfriend in Rosie, Joseph D’Onofrio as the young Tommy, Christopher Sirrone as the young Henry, Margo Winkler as Morrie’s wife, Vincent Pastore as a coatrack man, Kevin Corrigan as Henry’s younger brother Michael, and Chuck Low as the salesman Morrie Kessler who helps organize the Lufthansa heist.

Frank Vincent is brilliant in his one-scene performance as Billy Batts as a revered mob figure who insults DeVito at a bar on the night he returns to Jersey as he is just trying to have fun and relax. Paul Sorvino is fantastic as Paulie Cicero as a mob boss who is trying to run his crew as he also ensures that Hill gets his shit together while they also share a prison cell together while disapproving about Hill’s fascination with drugs. Lorraine Bracco is excellent as Karen as Hill’s wife who meets him at a blind date and then confronts him when he stands her up for a second date as she becomes bewildered by the mob culture yet also enjoys the lifestyle and its perks only to realize the dangers of the lifestyle that includes a terrible cocaine addiction.

Joe Pesci is marvelous as Tommy DeVito as a fast-talking, confrontational mob figure who says a lot of shit but has a short fuse where he can get really violent as it’s Pesci being extremely funny but also scary at times as it’s really one of his most iconic performances. Robert de Niro is remarkable as Jimmy Conway as a mob hood who works for Cicero yet is someone who can get things done and make more money while running small operations including the Lufthansa heist as he helped run that heist and ensure that no one gets way over their heads with the success of the heist. Finally, there’s Ray Liotta in a phenomenal performance as Henry Hill as a Jewish-Italian man who becomes fascinated by the world of the wise guys as a kid as he later becomes a man that gets things done but never kills anyone yet doesn’t mind giving someone beatings or live a good life only to endure a terrible cocaine addiction as it’s Liotta displaying a ferocity and vulnerability as a man who puts himself and his family in great danger only to realize what he must do to save himself but a terrible price.

Goodfellas is a magnificent film from Martin Scorsese. Featuring a great ensemble cast, a compelling rise-and-fall story, striking visuals, top-notch editing, and gripping music soundtrack. It's a film that explores the life of a mob hood trying to live a lifestyle of excess and vast riches only to get caught up in some bad shit as it’s told in an offbeat yet exhilarating fashion. In the end, Goodfellas is an outstanding film from Martin Scorsese.

I still prefer Taxi Driver and Raging Bull, but if someone who was unfamiliar with Martin Scorsese were to ask me what a "Scorsese" movie is like, I would definitely recommend this one. He's at the top of his game here.

@Sean-Taxi Driver, Raging Bull and Goodfellas I think if you would introduce a newbie to Scorsese, it would be those three films. I'd also include Mean Streets and The Wolf of Wall Street in that list for me personally.

Yeah, this is classic Scorsese - along with MEAN STREETS, my go-to Scorsese film. It just clicks on every level with a great cast, killer dialogue, a phenomenal soundtrack and insane cinematography and editing. It really just doesn't get any better than this one.

@J.D.-It really doesn't. This film is just so awesome and it gets better with every re-watch.