The Passion of Anna 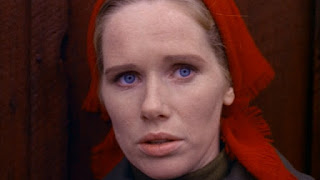 Written and directed by Ingmar Bergman, En passion (The Passion of Anna) is the story of a reclusive man who falls for mysterious yet grief-stricken woman after breaking up with a lover and dealing with the dissolution of his marriage. The third film in a thematic trilogy that of violence, isolation, and self-hatred in ordinary lives, the film is an exploration of an affair that would eventually turn into chaos. Starring Liv Ullmann, Max von Sydow, Bibi Andersson, Erland Josephson, Erik Hell, and Sigge Furst. En passion is a riveting yet haunting film from Ingmar Bergman.

Set in a remote island in Sweden, the film follows a man who is living alone following a divorce and dissolution of other relationships where his meeting with this grief-stricken woman would mark some unexpected change in his life as well as deal with some demons. It’s a film that play into a man who is living alone despite having a few friends as he meets this woman who is coping with the loss of her husband and son in a car accident as he gets to know her while being aware that something strange is happening around him and his friends. Ingmar Bergman’s script doesn’t have much plot as it’s more about this remote life in this island as it mainly follows the character of Andreas Winkelman (Max von Sydow) who is first seen repairing the roof in his house where this woman named Anna (Liv Ullmann) asks if she could make a phone call.

He would meet her again at a dinner with friends Eva (Bibi Andersson) and her husband Elis (Erland Josephson) as sees Anna as a woman that stands for the idea of truth. Andreas would deal with the growing schism in Elis and Eva’s marriage leading to a brief tryst with the latter and revelations about what is happening around them that includes Anna’s presence as someone who is passionate about faith. When Andreas starts a relationship with Anna, it goes well at first but things start to become questionable as the film also feature subplots relating to acts of cruelty against animals where Andreas saves a dachshund from being hanged. It would play into Andreas’ feelings about the world and whether Anna could really cope with these harsh realities.

Bergman’s direction does have some elements of style though much of his approach to compositions are straightforward. Shot on the Swedish island of Faro, Bergman would use the location to represent a world that is falling apart by these cruel events as well as this air of fervor and madness over some of these incidents. Bergman’s usage of the wide shots doesn’t just pertain to the locations but also in some intimate moments in some of the homes as it play into the growing discord between Eva and Elis as well as Andreas’ relationship with Anna late in the film. The usage of close-ups and medium shots as well as these precise compositions that are part of Bergman’s visual style add to the drama as well as this growing disconnect with reality. Notably in a black-and-white sequence where Anna dreams about being in despair and unable to help out as it relates to an execution. It’s a strange yet chilling sequence that matches up with the events of when the film was being made where Andreas and Anna watch television that relates to the turmoil of the late 1960s.

The direction also feature brief interludes as the actors playing the principle characters each comment on the characters they’re playing as it adds to this discussion of faith, isolation, passion, and dissolution. Even as it play into Andreas’ brief tryst with Eva who confesses her own issues with Elis while Andreas later copes with the barrage of animal cruelty around him as he would help neighbors bury the dead animals. The film’s climax doesn’t just play into Andreas’ frustrations with the world but also the violence that surrounds him as he starts to become unhinged by Anna’s passionate rhetoric about faith as it raises questions about everything she believes in. Overall, Bergman crafts a gripping yet evocative film about a man’s relationship with a grief-stricken yet passionate woman.

Cinematographer Sven Nykvist does incredible work with the film’s cinematography with its gorgeous usage of color and lighting for some of the interiors as well as some natural lighting for the exteriors as well as a stark black-and-white look for Anna’s dream sequence. Editor Siv Lundgren does excellent work with the editing as it is largely straightforward in terms of its approach to drama as it help play into some long shots with a few rhythmic cuts and montages that also add to the sense of discomfort looming throughout the film.

Production designer P.A. Lundgren does brilliant work with the look of the homes of the characters including some of the farms nearby Andreas’ home. Costume designer Mago does nice work with the costumes as it has some style into what Eva wears though it is mainly filled by sweaters and winter-like clothing. The sound work of Lennart Engholm is fantastic for capturing the natural elements of the film’s locations as well as the loud sounds of sirens and terror from the television that to the sense of despair in the film.

The film’s terrific cast feature some notable small roles from Marianne Karlbeck, Barbro Hiort af Ornas, Brita Oberg, Malin Ek, and Britta Brunius as women that Andreas and Anna would meet in their dreams, producer Lars-Owe Carlberg as a police officer, Sigge Furst as a neighbor named Verner, and Erik Hell in a superb small role as the farmer Johan Andersson as a man who is targeted by locals believing he is the one that is killing all of the animals. Erland Josephson is excellent as Elis Vergerus as a photographer who is trying to capture real emotions as he copes with his failing marriage but also his fascination towards Anna.

Bibi Andersson is amazing as Eva Vergerus as Elis’ wife who feels neglected and unimportant leading to a brief tryst with Andreas where she later copes with the effects of the affair. Max von Sydow is brilliant as Andreas Winkelman as a loner who is dealing with divorce and dissolution of his relationships as he’s trying to keep things to himself only to have a brief affair with Eva and later be in a relationship with Anna that later brings trouble and many questions about Anna. Finally, there’s Liv Ullmann in a phenomenal performance as Anna Fromm as a grief-stricken woman with a passionate rhetoric for faith who is a woman seeking truth as she’s troubled by her surroundings as well as the world in general leading to many questions if she really believes in what she’s saying.

En passion is a tremendous film from Ingmar Bergman. Featuring a great cast, Sven Nykvist’s gorgeous cinematography, a provocative premise, and its engrossing themes on passion, violence, humanity, and alienation. It’s a film that doesn’t provide any easy answers about human nature and their own faults as well as how one’s beliefs can distort their view on reality. In the end, En passion is a spectacular film from Ingmar Bergman.

Poor Bibi. I just love her. Always will. I really enjoy this movie, it's very unconventional for Bergman in a lot of ways. I remember the first time I saw it, those brief interludes of the actors talking really threw me off. I don't think I had seen a director do that before.

@Alex-Bibi is one of a kind. An actress for the ages. I wasn't sure what to expect but I think that is what made the film work. I'm just glad it came on TCM. I'm nearly half-done with Bergman's filmography as he's now in a shortlist of possible profiles for Auteurs #100.

I’m behind on my Bergman, but your review has given me a push. And this was a nice tribute to Bibi.

@vinnieh-Thanks. There's still a lot of films of Bergman that I hope to see as I've yet to see a bad film from him.