For the 17th week of 2019 as part of Wandering Through the Shelves' Thursday Movie Picks. We venture into the subject of television through music shows and musicals. Shows that celebrate the idea of music or a show that has actors singing and such. Here are my three picks of TV music/musical shows that… absolutely fucking sucked!!!!!

From the late Steven Bochco comes a police drama mixed in with the musical as many wondered what the fuck was the man, who created and produced such shows as Hill Street Blues, L.A. Law, Doogie Howser M.D., and would later create NYPD Blue, was thinking? I’ve seen clips of it and holy fuck it was horrendous. This bizarre mix of cops talking about dark shit and singing about it along with all of these musical numbers was just weird and cringe-inducing.

One of the shows from the late 2000s that only aired two episodes in the U.S. is one of those baffling musical series that made me people wonder who the fuck green-lit this shit? It’s this weird show about a businessman trying to run a casino that’s still in construction where he seeks help from a rival casino owner who wants to buy it from him. Hugh Jackman appears in the show as the rival casino owner as it wants to be flashy and entertaining but it often ends up feeling awkward. 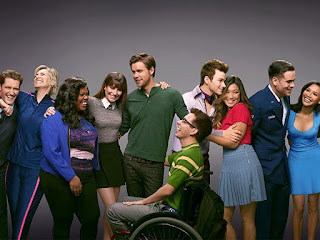 From 2009 to 2015 came a show on FOX that took the world by storm about a bunch of high school kids who compete as part of its glee club to compete with other schools as they sing contemporary songs and talk about the social issues of the day. Well, it’s one of those shows that went on for too long as it just features pathetic kids singing contemporary pop songs or old songs and appeal to dumb-ass millennial shitheads. It got popular for some fucking reason leading to a lame-ass concert movie as its mere existence really just made this idea of inclusivity feel forced and unearned. I agree with Channing Tatum’s sentiment in 21 Jump Street about that show. Fuck you Glee.

Love your comments on Glee, ha! I have to admit the show was a guilty pleasure of mine when it first started but after Season 3 (I think) I fell behind and never felt the need to pick it back up again!

I've never even heard of your first two picks but I couldn't get into Glee either. It was wildly overrated.

I don't know the first two shows you mentioned but I also listed Glee. Haven't seen a single episode yet and I'm sure I'll check it out.

Oh God...Cop Rock...hahahaaa. I might have been one of 2 people who watched this show when it first came out. I was curious how it was going to work...it didn't. I love the big hair and shoulder pads that scream 80's since I was in my heyday at that time. I watched it because it was just so bad it was good in a chicken seeing the headlights kind of way. I never even heard of the 2nd one and wonder if Hugh Jackman would like to keep it under wraps. I did watch Glee and I don't think it as putrid as many think now. I never watched it religiously and think that the first couple of seasons are probably the better ones...not that I saw them. It's corny but I think it will rate higher as time goes on...or not:)

@Often Off Topic-Fuck that show and fuck Ryan Murphy. He's a piece of shit.

@Brittani-There's a reason you haven't heard of those 2 shows. They're so fucking bad, people wish it never existed.

@Birgit-I can't believe you saw the horror that is... Cop Rock. Viva Laughlin was one of those shows that was so bad, it nearly killed television. I just wish Hugh Jackman would pick better musical projects. I saw some of The Greatest Showman and my god, that film is shit.