For the 16th week of 2019 as part of Wandering Through the Shelves' Thursday Movie Picks. We focus on the subject of interviews as it play into characters telling stories to another as well as getting a chance to know or discover about something or one’s self. Here are my three picks: 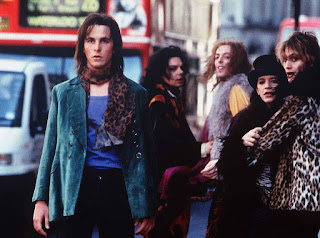 Todd Haynes’ glam-rock story about the rise and fall of a glam rock icon and his eventual disappearance from the public eye as the film is mainly about a journalist dealing with his past as he interviews various people who knew this glam rock singer. There’s several flashbacks and nods to the world of 1970s glam rock with Christian Bale playing the journalist who was a young fan at that time as he later deals with what he saw and its aftermath. It’s a flawed film but certainly an entertaining one for those who loved the world of 1970s glam rock. 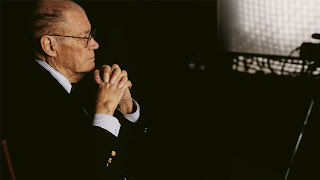 Errol Morris’ 2003 film has him talking to former Secretary of Defense chief Robert S. McNamara who served that position under the presidency of John F. Kennedy and Lyndon B. Johnson. It’s a film that has McNamara talking about the Vietnam War and the lessons that needed to be learn as it also play into many things that become much more prevalent about the dangers of war. McNamara isn’t afraid to say things that people wouldn’t want to hear but also showcases some of uneasy decisions one had to make as it is one of the finest documentary films of the 21st Century so far.

Sarah Polley’s personal film about her own family has talking to many people about her mother but also questions about who she is and the idea that the man who raised her might not be her biological father. It’s a film that is an unconventional documentary but a touching one as it has Polley questioning a lot about herself but also talk to siblings and longtime family friends about her late mother as it adds a lot into a woman discovering her identity as well as uncover some family secrets.

I've never seen Velvet Goldmine, but I'd like to. I'm putting that on my list so I don't forget again. I actually disliked your second two picks quite a bit. They just weren't for me.

I haven't seen any of these.

I just recently watched Velvet Goldmine and it was pretty wild. I haven't seen the other two.

@Brittani-I can see where you coming from with those two films and I'm cool with that. I should note that Velvet Goldmine might be a little wild though you do get a good glimpse of a full-frontal Ewan McGregor.

@Sonia-The Fog of War I believe is essential as it is about war and what governments had to do as it's a challenging film but worth seeing.

@Getter-The other 2 films are documentaries so you will have to put on some effort into the subject.

@Birgit-The Fog of War I feel is a film that should be shown at schools on the fallacies of war.