For the 18th week of 2019 as part of Wandering Through the Shelves' Thursday Movie Picks. We venture films about crime events that really did happen. Whether it’s a dramatization of real-life events or films about an actual crime told in a documentary fashion. Here are my three picks: 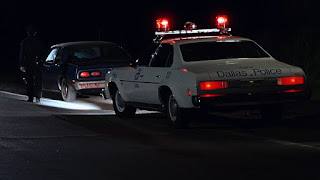 Errol Morris’ 1988 documentary film about the 1976 shooting of a Dallas police officer during a traffic stop. It’s a film that focuses on the crime itself and the man accused of the shooting which reveals a lot about a miscarriage of justice where Morris would recreate the events to find out what happened. The film would have a major impact as it would exonerate Randall Dale Adams who was accused of the shooting as well as find the true killer. It’s a true landmark film that shows what a documentary film could do and how it would piece everything to uncover the truth.

James Cox’s dramatic re-telling of the events in relation to the Wonderland killings in 1981 that supposedly involved porn star John Holmes and crime lord Eddie Nash. With Val Kilmer as John Holmes, it explores what happened when a group of people were killed because of Holmes’ information over some things he done with them and feeling cheated by them. Even as it involves Nash where there are a lot of complications that occur. It’s a flawed film that wants to be sensational and dramatic though it would also have some unfortunate distractions including an unnecessary cameo from… ugh… Paris Hilton.

David Fincher’s hypnotic suspense-thriller about the search for the Zodiac killer from the late 1960s into the early 1980s is probably one of the most overlooked films of the 21st Century so far. It is about these mysterious killers where a couple detectives, a journalist, and a cartoonist would be involved in the search to discover the identity of this mysterious killer. It is also a study of obsession and how some get lost in the obsession to find out who he is as the case still remains unsolved.

I don’t know the first 2 at all but the documentary sounds good. I almost chose Zodiac myself because it is a really good film.

I'm glad we match on Zodiac! I started watching The Thin Blue Line a few years ago but never finished. I should. I haven't seen your second pick either.

The Thin Blue Line - oof - I STILL think about that one all the time!

Only seen Zodiac and agree its a great film. Need to revisit it though been years since i've seen it.

I’m so glad to see Zodiac as I absolutely love it. I watched The Thin Blue Line a couple of years ago and all I can remember is that I didn’t like it that much. I’ve been meaning to rewatch it though.

Thin Blue Line was absolutely fascinating but also unsettling at how badly that man was used and abused.

I didn't care much for Wonderland but then its story is a very ugly one.

We match! Zodiac is so popular this week, rightly so, but while I chose it and think it was expertly made again its story is so dark I can't say I enjoyed the film.

Aside from our match I picked two that deal with murder, one the lead up to it and the other the aftermath.

Anatomy of a Murder (1959)-Complex, provocative and at the time of its release scandalous story of on Army Lieutenant (Ben Gazzara) accused of the murder of a man he claims raped his loose moraled wife (Lee Remick). He’s defended by a laconic but wily lawyer (James Stewart) who goes up against an equally canny prosecutor (George C. Scott). Excellent Otto Preminger courtroom drama with a top flight cast that also includes Eve Arden and Arthur O’Connell is based on a novel whose source was an actual murder case.

Heavenly Creatures (1994)-When wealthy teenager Juliet (Kate Winslet) transfers from England to Christchurch, New Zealand, with her family, she meets and quickly bonds with quiet, brooding Pauline (Melanie Lynskey) through their shared love of singing screen star Mario Lanza and games of make believe. At first all is well but when their parents begin to suspect that their increasingly intense friendship is becoming something more the girls decide to run away to America. As the girls fears focus on anyone who might tear them apart they take extreme measures to remove anything or anyone they see as obstacles. Based on a notorious New Zealand murder case this brilliantly acted and chilling drama was the first major critical success for director Peter Jackson.

Zodiac (2007)-In the late 1960s and 1970s, San Francisco is gripped by fear as its residents are plagued by a serial killer who calls himself Zodiac. Investigators (Mark Ruffalo, Anthony Edwards) and reporters (Jake Gyllenhaal, Robert Downey Jr.) become obsessed with learning the killer's identity and bringing him to justice. Meanwhile, Zodiac claims victim after victim and taunts the authorities with cryptic messages, cyphers and menacing phone calls. Unsettling David Finchner film has its share of good points but deals with an ugly, ghoulish story.

we share Zodiac! Haven't heard of your other picks, but they sound really interesting.

Good call on Zodiac. It is as you said engrossing and utterly hypnotic.

@Birgit-The Thin Blue Line is an example of what a documentary could do to set things straight.

@Brittani-Finish The Thin Blue Line as it's worth it all the way through.

@Myrela-It's a film that holds up better with each re-watch.

@Sonia-I think a re-watch is needed.

@joel65913-Glad to know there's love for The Thin Blue Line.