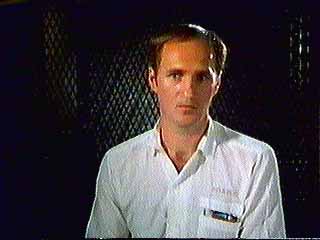 Written and directed by Errol Morris, The Thin Blue Line is the story about the murder of a police officer back in 1976 in Vidor, Texas. When Randall Dale Adams is accused of the murder, he tries to plea his innocence as he faces a death sentence for the murder. The documentary film explores the murder as it features re-enactments of what happened as Morris tries to uncover the case and to see if Adams is really innocent. The result is an engrossing yet very stylized documentary from Errol Morris.

On November 28, 1976, a Dallas police officer named Robert W. Wood was shot to death during a traffic stop as his partner tried to shoot at the runaway car as she was unable to remember the license plate or anything else that occurred. Less than a month later, a man named Randall Dale Adams is convicted as the murderer though he claims to be innocent. While Adams has an alibi claiming he was in a motel with his brother while believing that a 16-year old kid he had met and hung out with named David Ray Harris earlier that night was the killer. Adams goes on trial as his defense believe that he hadn’t done anything at all as he had no criminal record while they also suspect Harris.

Through opportunistic witness claiming they saw Adams at the blue car that was driven at the crime scene as well as a prosecutor who wanted to maintain an undefeated streak of court wins. Adams was found guilty and given a death sentence though he was able to appeal reduce it to a life sentence though he was maintaining his innocence. Meanwhile, his defense team and various law officials continues to find out more information on Harris who has a criminal record since he was a kid as well as numerous run-in with the laws. Notably as Harris reveals some strange comments which reveal that he might’ve been the one.

The film is an exploration of a man’s innocence and the way the justice system could be abused in the hands of a few key people including the one person who could actually be the killer. Told through interviews and re-enactments, the film explores the actual crime scene and Adams’ trial where it is clear that things did go wrong to try and accuse Adams. Notably as a neighbor of the witness who testified revealed that the witness who claimed to have seen Adams were really just opportunistic people wanting money for their testimony. A defense associate for the attorney admits that she was convinced that Adams was guilty until looking his background and his alibi.

Through Errol Morris’ entrancing direction that often has people being interviewed and talking in a relaxed state. They’re able to piece their words together to reflect what might’ve happened on that night. Through these stylish re-enactments with actors playing the two cops and the supposed killer, Morris uses these scenes and later add things as if there’s more to the story about what happened. The interviews with law enforcement and attorneys reveal a lot of how things can be undone while one law officer reveals that his father was part of an early version of the FBI that had been part of the team that had captured John Dillinger.

Since the film also features clips from newsreel and other movies to reference what some of the people being interviewed were seeing or were reflecting on. It adds an element of who these people are and why they could be doing the right thing or the wrong thing. Yet, Morris prefers not to make any judgment on these individuals for their actions while wanting Adams to tell his side of the story as well as Harris character. The latter in particular as he exposes his own childhood background that could play part into his own criminal record.

Through these eerie compositions where Morris would shoot a simple object like an ash tray, a throwing fast food cup, or a police siren and make it look like there’s a lot to the story as it’s being told from various individuals through these interviews. Along with very gorgeous shots of the city of Dallas, there is something about the way Morris presents the film as a whole as he goes beyond the parameters of a documentary. Through this device of having the interviewers talk at the camera while re-creating scenes about what happened. The overall result is a truly fascinating yet chilling film from Errol Morris.

Cinematographers Robert Chappell and Stefan Czapsky do fantastic work with the film‘s entrancing yet hypnotic look for the re-enactment scenes and overhead shots of Dallas along with more simplistic work in the interviews. Editor Paul Barnes does an excellent job with the film‘s methodical approach to the pacing as well as utilizing a very stylized approach to creating montages and rhythms to capture the action of what happened in the crime scene.

Production designer Ted Bafaloukos and art director Lester Cohen do an amazing job with the set pieces created for Adams‘ original interrogation as well as the look of the car driven by the killer. The sound work of Brad Fuller is terrific for the mood set in the re-enactment scenes along with the harrowing of the gunshots that occur quite often in the film. The film’s score by Philip Glass is definitely the film’s technical highlight for its moody yet evocative electronic score to help play to the drama and dark aspects of the crime and characters present in the film.

The Thin Blue Line is a mesmerizing yet very provocative documentary from Errol Morris. The film is among one of the best examples of what a documentary can do in piece up clues to uncover a mystery or to fix something where the wrong person was tried and accused of. It is also a film that indicated why Morris is among one of the best documentary filmmakers as he doesn’t try to hammer down some ideals but rather tell a story and let the audience figure it out. In the end, The Thin Blue Line is a truly masterful film from Errol Morris.

Aside from being a great doc, this movie shows the power that certain films can have. It got a man off death row for Christ's sake. Pretty damn fine accomplishment.

Nevermind that Adams sued Morris once he was freed... it's all good.

Even though I've only seen a few of Morris' films, I much prefer him over the very overrated Michael Moore.

I liked the fact that Morris used this doc and actually did something. The part about him getting sued is kind of funny but yeah, it's all good.

I detest Michael Moore. Good intentions, perhaps, but his personality is so damn off-putting. Can't stand it.

@Alex-Exactly. Plus, I don't like Moore's politics. Actually, I don't care for anyone's politics at all. I'm not even political at all. I don't even vote anymore because there isn't anyone that really means what they say.