2019 Blind Spot Series: In the Realm of the Senses 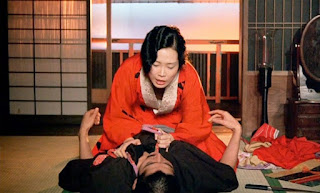 Written and directed by Nagisa Oshima, In the Realm of the Senses is a film based on a real-life incident in 1930s Japan involving a destructive love affair between a man and a woman during a tumultuous time in Japan. The film is an exploration of a torrid affair between a maid and her abusive boss as it turns into a wild experiment of sexual pleasure that later takes on some new extremes. Starring Tatsuya Fuji, Eiko Matsuda, Aoi Nakajima, Yasuko Matsui, Meika Seri, Kanae Kobayashi, Taiji Tonoyama, and Kyoji Kokonoe. In the Realm of the Senses is an eerie yet provocative film from Nagisa Oshima.

Set in 1936 Tokyo, the film revolves around a real-life incident involving a former prostitute working at a hotel and its owner as their sexual affair becomes a chaotic and toxic relationship that pushes their sexual and emotional yearnings to great extremes. It’s a film that explores two people who are married to other people as they become fascinated with one another and then carry on a secret affair that eventually becomes tumultuous and perverse. Nagisa Oshima’s screenplay doesn’t really much of a plot as its first act is about how Sada Abe (Eiko Matsuda) meets the hotel owner Kichizo Ishida (Tatsuya Fuji) after watching him having sex with his wife Toku (Aoi Nakajima) while is working as a waitress for the hotel despite having to share rooms with other employees as she works to fulfill a debt her husband is trying to finish off.

Ishida becomes fascinated by Abe as well as see her as another sexual conquest that eventually becomes a secret affair where the film’s second act has them move away from the hotel and somewhere in the middle of Tokyo. The affair would intensify into elements of sadomasochism and other explicit sexual acts that would disturb people working at another inn or hotel. To make money to stay in those places, Abe would return to prostitution where she would find new pleasure in sadomasochism as it would add to greater extremes in her relationship with Ishida where it would become destructive and chaotic.

Oshima’s direction in the film does have bits of style but it is in the way he presents this toxic relationship between Abe and Ishida that is unsettling in terms of what he does as it relates to sex. Shot on various locations in nearby areas of Tokyo, the film does play into this world of growing imperialism where Japan is changing yet its morals are becoming unruly as this affair between Abe and Ishida would later be described as scandalous for its time. Some of Oshima’s compositions are stylish in some of the wide shots along with high and low angles to get a look into a room or a location yet much of his direction is intimate as it’s often set inside a room where there is a claustrophobic element but also a place where Abe and Ishida can isolate themselves from a world that is judgmental but also ever-changing in this emergence of imperialism. Some of the dramatic moments in the film including scenes where Abe and Ishida are walking in the rain showcase a couple having some fun although there is also a sense of danger into what are they doing. Especially as it relates to their sexual relationship as they would continuously push themselves for pleasure to the point of obsession.

Oshima’s direction also amps up the sexual content as it would play into the drama and obsession between the two where even something like erotic asphyxiation becomes a regular thing for the two. Oshima definitely raises a lot of question into how this relationship became scandalous during this time where Japan becomes an imperialist nation. The film’s final minutes aren’t just the most shocking aspects of the film but it also shows how fucked up love can be. Overall, Oshima crafts a riveting yet visceral film about an obsessive and chaotic love affair between a hotel manager and one of his maids.

Cinematographer Hideo Ito does brilliant work with the film’s cinematography with its colorful and vibrant look with some unique lighting schemes by Kenichi Okamoto for many of the film’s interior setting as it add to this air of beauty and chaos in the film. Editors Keiichi Uraoka and Patrick Sauvion do excellent work with the editing as it is largely straightforward with a few rhythmic cuts to play into the drama and extreme sexual content. Production/costume designer Jusho Toda and co-costume designer Masahiro Kato do amazing work with the look of the sets that Abe and Ishida would live in where it is lavish in some parts but small in some places while the costumes consist of these colorful robes along with bits of clothing that would play into their erotic appetites.

The makeup work of Koji Takemura is fantastic for the look of the geishas and the style of makeup they had to wear. The sound work of Tetsuo Yasuda is superb for its approach to sound effects and setting an atmosphere in the locations as well as in sparse ambient sounds. The film’s music by Minoru Miki is incredible for its usage of traditional Japanese string music that help play into the drama and unsettling tone of the film with its usage of the shamisen string instrument along with a few lush string orchestral pieces in the film as it one of the film’s major highlights.

The film’s wonderful ensemble cast feature some notable small roles from Kanae Kobayashi as an old geisha who is not shocked by Abe and Ishida’s exploits, Taiji Tonoyama as an old beggar who is eager to get sexual pleasure from Abe, Naomi Shiraishi and Komikichi Hori as a couple of geishas, Kyoji Kokonoe as a schoolteacher whom Abe would sleep with for money, Meika Sera as a hotel maid, Yasuko Matsui as an inn manager, and Aoi Nakajima in a terrific small role as Ishida’s wife Toku. The performances of Eiko Matsuda and Tatsuya Fuji are phenomenal in their respective roles as Sada Abe and Kichizo Ishida as couple having an affair that becomes intense and chaotic with the former as someone that is eager to have an orgasm better than the last one she had and the latter as a man who is into kinky sexual acts where they both love each other but also grow to get more provocative in their thirst for sexual and emotional pleasure as their performances are daring in terms of what they do to provoke and confront love at its most primal.

In the Realm of the Senses is a tremendous film from Nagisa Oshima that features great performances from Eiko Matsuda and Tatsuya Fuji. Along with its gorgeous visuals, mesmerizing music score, and an eerie take on a real-life story that explores sexual passion and taboos that would shock people during the time of Imperial Japan. It’s a film that is definitely uneasy to watch in terms of its graphic depiction of sex as well as what two people would do to push themselves to the limit. In the end, In the Realm of the Senses is a spectacular film from Nagisa Oshima.

I've heard about this arthouse film without having seen it. Sounds controversial yet interesting. Probably a love it or hate it sort of deal with some walkouts when was in cinemas

Thanks for sharing, this sounds divine.

@Chris-It is controversial and I didn't even touch upon some of the antics that occur wasn't mainly to not spoil anything. It was more of the fact that I finished the film feeling unclean and overwhelmed. I wouldn't be surprised if people saw it in theaters and walked out. It does blur the line of what is considered pornography. I wouldn't call it pornography although pornography isn't necessarily a bad thing. This was a bit more extreme.

I've not heard of this before, but it sounds bonkers. Think I have to find this one.

@Wendell-It is available on the Criterion Channel and on Criterion DVD/Blu-Ray but I should warn you. Watch it alone. Don't watch it with your wife. If you do, either she will be disgusted or will ask you to do things that you don't ever want to do depending on what type of woman she is. This isn't NSFW but it's the truest definition of what unsafe is.